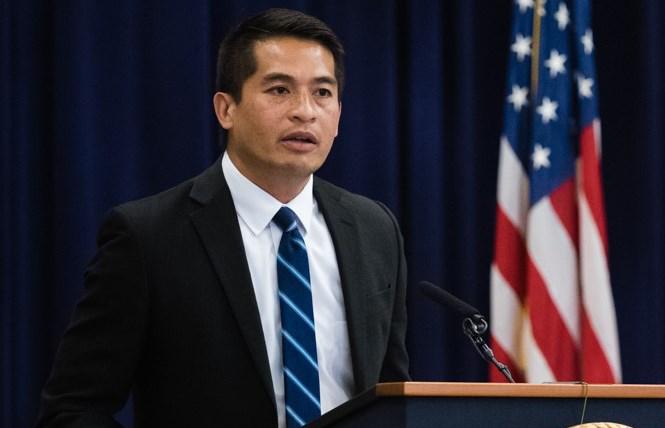 Bumatay is only the second openly LGBT person Trump has nominated for a federal judicial position. Four months ago, Trump nominated Mary M. Rowland to a seat on the U.S. District Court for Northern Illinois. Her nomination has been sent to the full Senate for a vote but it is unclear whether the Senate will take up any more business until after the midterm election.

The 9th Circuit covers California, Oregon, Washington, and six other western states and has been considered one of the nation's more progressive circuits. Trump has already had two new judges confirmed to the 9th Circuit and has five more, including Bumatay, pending.

Bumatay, 40, is an assistant U.S. Attorney for the Southern District of California. The White House news release announcing his nomination noted that he is a member of San Diego's Tom Homann LGBT Law Association.

Bumatay is a graduate of Yale and of Harvard Law School. He clerked for 10th Circuit Judge Timothy Tymkovich (who argued for Colorado's anti-gay Amendment 2 before the U.S. Supreme Court in Romer v. Evans). He also clerked for Judge Sandra L. Townes of the U.S. District Court for the Eastern District of New York.

He is a member of the National Filipino American Lawyers Association and, if confirmed, would be the first Filipino-American federal appeals judge.

Charles Moran, a gay businessman in Los Angeles who was a Trump delegate to the Republican National Convention, said he was pleased with Bumatay's nomination but "disappointed" that California's Democratic U.S. senators, Dianne Feinstein and Kamala Harris, opposed it.

"He is a qualified, capable jurist and public servant, having served in several positions in the highest ranks of the Department of Justice working to combat the national opioid crisis, trans-national organized crime, and tackling prison/reentry policies," said Moran. "The diversity and wealth of knowledge he would bring to the 9th Circuit would be of benefit to all Americans. I hope partisanship will not take hold and [that] he receives a swift and decisive affirmative vote in the coming weeks."

Presidents typically confer with a state's U.S. senators on who to consider for various judicial positions within their respective states. The Los Angeles Times reported that Feinstein and Harris said the White House went through with the nominations of two other 9th Circuit nominees (in addition to Bumatay) without their agreement. They said they would oppose all three. Then-White House counsel Don McGahn said Harris refused to work with the White House on the nominations and that dozens of meetings with Feinstein and her staff did not produce any "constructive" feedback, according to the Times report.

The Bumatay announcement came one day before Democratic Senate leader Chuck Schumer (New York) agreed not to block a Senate vote on 15 previous Trump judicial nominees in return for a recess until November 7, enabling legislators to go back to their home districts to campaign for re-election. Democrats who supported that deal said Republicans already had the votes they needed to confirm the nominees. In fact, since Trump became president, the Republican-controlled Senate has confirmed 28 federal appeals court nominees and rejected zero. It has also confirmed 53 district court judges and two U.S. Supreme Court justices.

Bumatay's nomination is now one of 12 still pending to federal appeals court seats.

Rowland's nomination is one of 15 district court nominations still pending. The Senate Judiciary Committee held a hearing on her nomination August 22. She is married to Julie Justicz, resides in Oak Park, Illinois, and they have two children. The questionnaire she filled out for the committee includes mention that she is a member of the Lesbian and Gay Bar Association of Chicago and was a member of Lambda Legal Defense and Education Fund between 1992 and 2010. She has made three presentations before the Chicago gay legal group and spoke to a law firm about her "path to the bench as an out lesbian" in June 2017. And she has worked on several Democratic campaigns. Rowland's nomination was recently placed on the Senate executive calendar, although the Senate is in recess.

At Rowland's confirmation hearing, Senator Dick Durbin (D-Illinois) introduced Rowland, saying she was a "trailblazer ... inspiring a generation of LGBTQ attorneys who watched her break glass ceilings with fearlessness and determination." He and Senator Tammy Duckworth (D-Illinois) welcomed "Mary's wife, Julie Justicz," noting that their children were off at school.

Rowland, 57, is a native of Ohio and attended the University of Michigan and then University of Chicago Law School. She worked for two years with the American Civil Liberties Unions of Illinois and has served as a magistrate judge for the U.S. District Court for Northern Illinois since 2012.