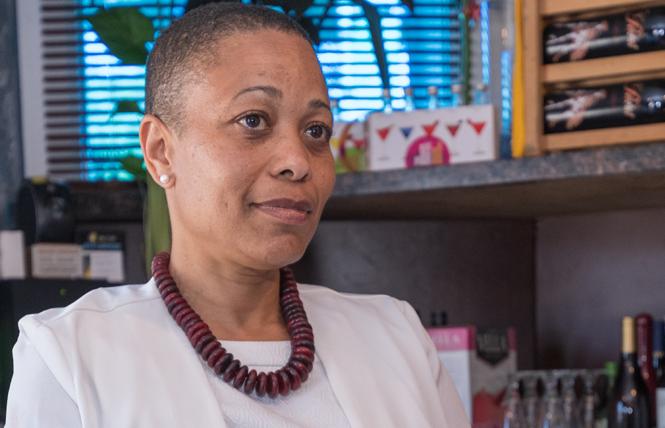 Three weeks ahead of the November 6 election lesbian Oakland City Council candidate Pam Harris received a surprise boost to her candidacy when the incumbent unexpectedly endorsed her.

Councilwoman Annie Campbell Washington, who holds the District 4 seat, had announced in April that she wasn't seeking re-election due to the "toxic" tone at City Hall. She then endorsed as her successor Oakland native Charlie Michelson, who was raised by his mom, a lesbian who came out after divorcing his father.

But on Sunday Michelson announced he was suspending his campaign. In a note he posted to his campaign website, he wrote "that in recent days, a deeply personal matter has come up, and unfortunately, I cannot continue the race for Oakland City Council."

Adding that it was "an incredibly hard decision to make, and I am saddened to let my supporters down," Michelson referred to "many" undisclosed reasons as for why "it is the right decision for me and my family." The shipping company executive has three children with his female partner.

Monday morning Harris announced that she was now Campbell Washington's sole endorsed candidate and Mayor Libby Schaaf's number one endorsement in the race. Like San Francisco, Oakland uses ranked-choice voting for its council and mayor races.

The news release quoted the councilwoman as being "proud" to endorse Harris, who "if elected, she'll be able to rise above divisiveness in Oakland politics and build essential coalitions to make change happen. I can't wait for her to represent me, my family, and my neighbors in City Hall."

Harris stated that Michelson's perspective would be missed.

"As I got to know Charlie on the campaign trail, I came to appreciate his passion for Oakland," she stated.

If elected, Harris would be the second out lesbian to serve on the Oakland council, alongside at-large councilwoman Rebecca Kaplan, and the third out member should District 2 City Councilman Abel Guillén, who identifies as two spirit, win re-election next month.

Last Saturday, Harris also announced that she had teamed up with fellow candidates Nayeli Maxson, executive director of the Alliance for Community Development, and Kaplan's chief of staff Sheng Thao to form the "Women's Leadership Slate" and encouraged voters in the district to list the three as their ranked choices in whatever order they preferred.

In an ad the trio released — it can be seen at https://youtu.be/lqN6lHb4QcI — they note, "... for the past 16 years this seat has been held by dynamic women. We are three well-qualified candidates for City Council. We are mothers, public servants, and community leaders."

Harris told the Bay Area Reporter, which endorsed her in the race, that she agreed to run on the slate because "with the unfolding nightmare in Washington, I felt it was vitally important to come together with the other women candidates in this race to show what women's leadership looks like when we work together to lift up one another." 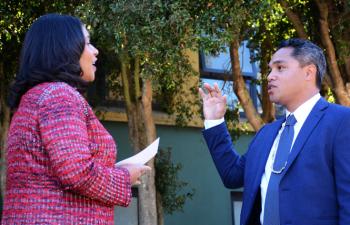 SF mayor names Moliga to school board
San Francisco school board candidate Faauuga Moliga also received an unexpected boost for his bid this week when San Francisco Mayor London Breed appointed him to a vacant seat on the oversight body.

Breed had already endorsed Moliga in the race for three open seats on the panel that oversees the San Francisco Unified School District. Then Monday morning she administered the oath of office to Moliga after naming him to succeed Hydra Mendoza-McDonnell, who resigned after taking a job with the New York City school district.

A father of three children in public schools, Moliga lives in the Oceanview neighborhood. The nephew of American Samoa Governor Lolo Matalasi Moliga, he is the first Pacific Islander to serve on the school board.

The San Francisco native and SFUSD alumnus currently works for the San Francisco Department of Public Health Comprehensive Crisis Services. He, along with fellow parents Alison Collins and Li Miao Lovett, has the endorsement of the local Democratic Party.

"Faauuga has spent his entire life in service to our community," stated Breed. "His direct, firsthand experience with our public schools, his deep community ties, and his expertise in developing holistic programs that support our youth, particularly those whose lives have been impacted by trauma, give him a unique perspective that I am confident will immediately benefit the Board of Education and our students."

Moliga, who has a Bachelor of Science degree in justice studies and a Master of Social Work from San Jose State University, has worked in a number of jobs focused on helping educate students of the city's public schools.

"Throughout my career, I have worked with our students and created policies that keep them in school to graduate," stated Moliga, who was endorsed by the B.A.R. last week. "I'm excited to help our students access opportunities enjoyed in a community schools model that can reduce the opportunity gap throughout the San Francisco Unified School District."

There are five out candidates in the school board race this year, including Mia Satya and Martin Rawlings-Fein, who would be the first elected transgender public officials in the city and were also endorsed by the B.A.R. Gay educator Connor Krone and lesbian firefighter Lenette Thompson are also on the ballot, as is Phil Kim, a gay man and charter school employee who in 2016 lost his first bid for a school board seat.

Campos rules out SF DA bid
Gay former San Francisco supervisor David Campos has ruled out running to be the city's district attorney next year. The November 2019 race became wide open in early October following the surprise decision by District Attorney George Gascón not to seek re-election due to the failing health of his mother.

Campos was termed out of his board seat in 2016 and lost a bid for a state Assembly seat in 2014. Last year, he went to work for Santa Clara County as a deputy county executive and, as part of his portfolio, has oversight of its LGBTQ affairs office.

"I decided it was not really the right decision for me and my family right now," Campos told the B.A.R. this week. "I am very happy with the work I am doing for Santa Clara County."

One project the county is working on is building affordable housing for LGBT seniors. It is also planning to open this winter an LGBT-specific homeless shelter, which the county supervisors voted to approve Tuesday.

On Monday, Campos took part in a news conference urging the county and San Jose officials to finalize the lease for the shelter so it can open by December.

As for the D.A. race, it is expected that a progressive candidate will emerge, with outgoing District 6 Supervisor Jane Kim oft-mentioned as one possibility. Former Police Commission members Suzy Loftus and Joe Alioto Veronese, as well as Deputy Attorney General Leif Dautch and Alameda County prosecutor Nancy Tung have all pulled papers for the race.