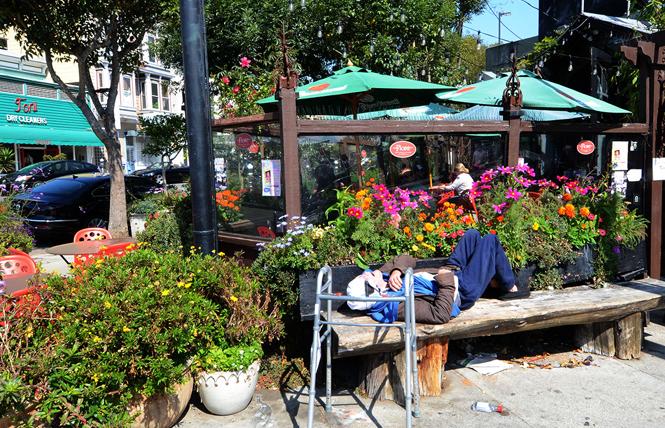 Homelessness has been one of the most talked about issues leading up to the November 6 election in San Francisco, and one of the most contentious issues voters will determine is Proposition C, dubbed "Our City, Our Home" by supporters.

The proposition would raise an estimated $300 million annually to fund homeless services and prevention by taxing companies between 0.175 percent and 0.690 percent on gross revenues over $50 million. For businesses generating more than $1 billion in revenue and have 1,000 employees nationwide, the tax rate would be 1.4 percent of their payroll expenses.

The Board of Supervisors would determine how to distribute the money every year within these confines: dedicating at least half to permanent housing solutions, 25 percent for mental health services, up to 15 percent for services for people who have recently become or are at risk of becoming homeless, and up to 10 percent for short-term shelter and access to hygiene programs for homeless. An advisory committee would monitor the fund.

Local officials including Mayor London Breed, gay state Senator Scott Wiener (D-San Francisco), Assemblyman David Chiu (D-San Francisco), and the San Francisco Chamber of Commerce have come out against the measure, primarily citing a lack of accountability for the funds, a possible negative impact on the local economy, and that the $300 million annually the city already allocates to homelessness needs to be audited for effectiveness before a large tax increase like Prop C is rolled out.

Brian Basinger, a gay man who's executive director of the Q Foundation, which provides supportive housing for HIV-positive people, is a leader of the Yes on C campaign. He explained at a Bay Area Reporter editorial board meeting that within eight years Prop C would provide 4,000 units of affordable housing, "That's more than the city has built in 30 years," he said.

According to the Yes on C website, that would include 500 newly constructed units; 1,500 units of supportive housing, including some on land that the city currently owns for which 100 percent affordable housing is planned; 1,000 single-room-occupancy units; 340 short-term subsidy units; and 500 long-term subsidy units.

Additionally, $40 million annually will go toward prevention efforts, which the website states would, "greatly expand a successful existing model that allows providers to access assistance for their clients in real time via a specially designed computer application."

The more than 1,000 people currently on the single adult shelter waitlist would be immediately housed, Basinger said, if the proposition were to pass. Lastly, included in the proposition is mental health services like street-based care services and treatment and facility housing that would receive $3 million in the first year, $4.5 million in the second, and $8 million every preceding year.

"This would make such a huge impact right out of the gate," Basinger said. "I know it will make a difference. I've been down in the trenches for 15 years, as are many involved in the campaign, and we know what works because we are the ones using the tools. It's one of the reasons we came together because we know what we need to do to do the job right."

Unions such as the United Educators of San Francisco are on board, and the city's two main gay political groups, the Alice B. Toklas LGBT Democratic Club and the Harvey Milk LGBTQ Democratic Club, also back the proposition.

Opposition
Those who oppose Prop C have voiced concern of a possible negative impact on the local economy. The city economist's report estimates that Prop C will cause up to a $240 million loss from the city's gross domestic product every year for the next 20 years, Breed stated in her news release.

"We cannot afford to lose even more jobs for middle class San Franciscans, the jobs in retail, manufacturing, and services that are most likely to flee the city under Proposition C," Breed said in a news release announcing her opposition.

Breed added that the measure lacks accountability, stating in a news release, "Proposition C does not audit the money the city already spends. It does not include a detailed spending plan for the $300M in taxes it seeks to add, nor regular audits of that money, nor adequate public oversight over how it's spent."

The mayor also claimed the proposition would make the homeless problem worse because it, "could put us in the untenable and expensive position of funding services for residents from other counties," due to not including neighboring counties in the measure.

"If Prop C were a smaller tax, I'd likely overlook these deficiencies and support the measure, given the importance of investment in homeless services and housing," Wiener said in a separate news release. "However, in light of Prop C's massive size and the lack of stakeholder engagement, I simply can't overlook the irresponsible way in which it was crafted."

"Prop C is very important," he said. "We have this drug addiction and mental health crisis on our streets. It's bad. We have actually lost resources for housing for people who are sick, mentally ill, or need drug treatment. We have hundreds fewer board and care beds than we did 10 years ago, even than last year."

He had recently visited Zuckerberg San Francisco General Hospital and Trauma Center, the city's public hospital, and said he feels that the city is in a similar position when it was facing the HIV/AIDS epidemic in the 1980s and 1990s. He explained that just like a few decades ago, the city was facing a national health crisis with little financial help from the state or federal government. The city needs to come up with innovative models of care, like it did in the past, but it needs the resources, he said.

"There are folks at SF General who know what we need to do around mental health and drug addiction but don't have the resources and are not getting the attention that they need to do something similar like around the HIV/AIDS epidemic for mental health," Mandelman said.

Some polling has suggested Prop C to be in a slight lead, but voters will decide its fate November 6. It requires 50 percent plus one to pass.