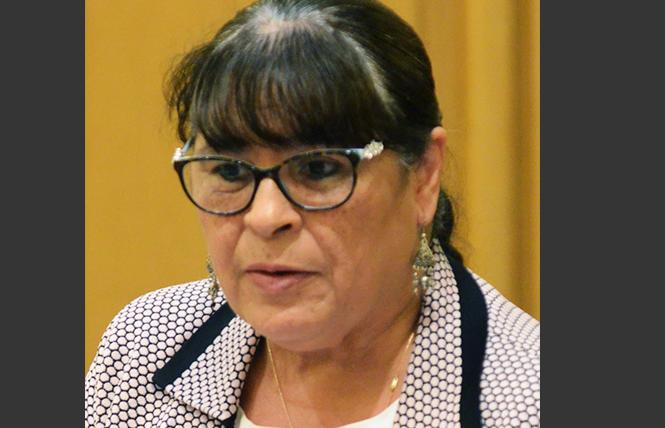 Egg's headless torso was found in a fish tank in his South of Market house on August 17. San Francisco Police Chief William Scott has not responded to the Bay Area Reporter's request for comment on the criticism from neighbors who said their concerns over Egg's disappearance were not taken seriously.

When approached outside the police commission meeting last week, Scott referred a reporter to David Stevenson, the department's director of strategic communications. He, in turn, said the department would not be commenting because the case is still under investigation.

San Francisco Police commented on the case previously during an August 28 news conference. At that time, Commander Greg McEachern briefed reporters on the case and fielded a number of questions focusing on the police not taking action earlier when neighbors reported their suspicions.

McEachern said that police visited the home twice in late July and once in August after getting calls from neighbors and from Egg's sister. Police didn't enter the home until August 14 after neighbors reported that a private crime scene cleanup company arrived at the home. After looking in the home, officers immediately became suspicious and had noticed chemicals in the house. They found the torso hidden in the home three days later.

During the police commission meeting Wednesday, October 3, McEachern was tasked with explaining to the panel the department's wellness check policy. He did not talk specifically about the Egg case. Lesbian police Commissioner Petra DeJesus had attempted to ask Scott about the policy during the panel's last meeting September 12, but was prohibited from doing so until the item could be put on the commission's agenda.

DeJesus told the B.A.R. Tuesday, October 9, that although she couldn't directly ask about the Egg case, she thought it was important for the public to be aware of the orders police have about how to conduct well-being checks.

Gay District 8 Supervisor Rafael Mandelman told the B.A.R. in an editorial board meeting before the police commission meeting that, for now, he was deferring to SFPD.

"Let's see what the chief says on Wednesday," he said, referring to the October 3 commission meeting.

He did not immediately respond to a follow-up question about whether he would call for a hearing. During the editorial board meeting, he said that under the board's rules he could request a hearing but it would have to be scheduled by the board president.

The police commander told the commissioners of the department's well-being check policy. He listed a number of elements that would prompt officers to take more serious action in the case, including entering the home.

DeJesus questioned McEachern about the police policy but was not permitted to ask the key question: Did the police follow protocol in the Egg case?

Neighbors had suspected foul play and communicated that to police. In at least two instances, neighbors were falsely assured that Egg was out of town and safe, information that was left on Egg's answering machine, in a voice that was not his own. Family and friends say the fact that an answering machine picked up was in itself suspicious since Egg never owned an answering machine in the more than 40 years he has lived in his Clara Street home.

Police say that Lance Silva, 39, had used Egg's debit card to pay the crime scene cleanup company. Neighbors say Silva was living in the home after Egg disappeared. The crime scene cleanup crew was met by Robert McCaffrey, 52. Both men were arrested on suspicion of homicide but the San Francisco District Attorney's office dropped those charges pending further investigation. Silva was kept in custody on a probation hold out of Alameda County.

In an editorial board meeting last week, San Francisco Public Defender Jeff Adachi said he could not comment on the case because his office is representing one of the men who were initially arrested. But he did say that the city is "extremely lax" when it comes to things like well-being checks on adults.

"Auto burglaries are lax too," he said. "The culture is anything goes. It does concern me. When you run a public agency, you have an obligation to respond. I'm not saying my office is perfect, but we have a rule that we respond within 24 hours."