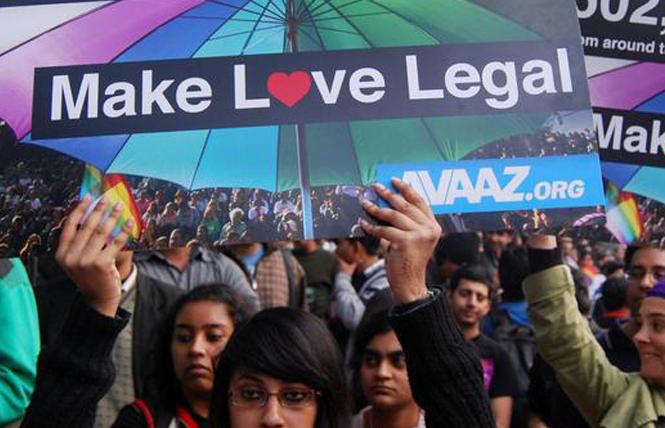 Demonstrators wait outside of India's Supreme Court in Bangalore September 6 for the judges' decision on Section 377, the penal code that criminalized homosexuality in India. Photo: Courtesy IANS

"History owes an apology to members of the community for the delay in ensuring their rights," said Justice Indu Malhotra, reported the New York Times.

The petitioners in the court challenge included: couple Navtej Singh Johar, a dancer, and Sunil Mehra, a journalist; celebrity chef Ritu Dalmia; businesswoman Ayesha Kapur; and hotelier Aman Nath. More than 25 Indians of various social and economic backgrounds joined them as the Supreme Court prepared to hear the case.

The justices also stated in the ruling that the constitution should evolve with time.

Section 377 wasn't completely abolished, however, as bestiality and other sexual acts included in the law remain intact, but LGBT Indians now won't be arrested, blackmailed, or discriminated against.

The news traveled fast among queer Indians around the world as many rejoiced - from the steps of the courthouse in Bangalore to Facebook.

To many LGBT Indians' surprise, the court's ruling did more than just decriminalize homosexuality; it extended the protections of the country's constitution to LGBT Indians.

"The very first post-judgment reaction was relief, a feeling too powerful to put in words," wrote Mohammed Shaik Hussain Ali, a gay man who is chairperson of Trikone, the South Asian LGBT organization based in the San Francisco Bay Area, in an email to the Bay Area Reporter.

"It is such a pleasant news to see that the Supreme Court of India unanimously passed this judgment. Together, those justices finally took care of an archaic colonial-era law criminalizing homosexuality," he wrote.

"I feel thrilled because we did not expect this to go our way, so it's very exciting. After 150 years it's more than about time. This is a great first step to full equality for LGBTQ people in India," said Narayanan, who is a bisexual woman.
Meenakshi Ganguly, the South Asia director for Human Rights Watch, said, "This ruling is hugely significant."

Law on LGBTs' side
Ali and others told the B.A.R. that they feel now they have the law on their side.

"To me personally, this means that at least legally, the discrimination is invalid and that I have the law on my side," he wrote. "To the community, they can now be less afraid of persecution/blackmail, at least legally."

Anji, a lesbian, said she was glad of the legal protections.

"I don't think that harassment will stop in India, but at least now you have some kind of legal recourse when someone harasses you, as opposed to not having that before," she said.

"We are giving credibility and legitimacy to mentally sick people," Swami Chakrapani, president of All India Hindu Mahasabha, a conservative group, told the Times.

Several attempts to pass a law in India's Parliament at the Supreme Court's direction since the court reinstated Section 377 in 2013 failed.