Editorial: Zhao made herself unacceptable 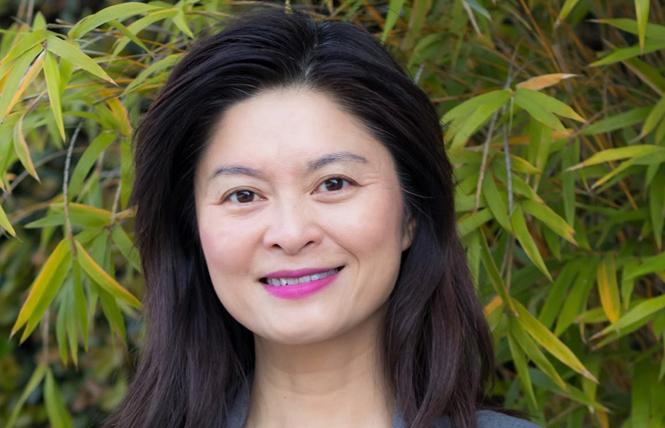 San Francisco school board candidate Josephine Zhao did the right thing when she announced Monday that she was exiting the race. In fact, had she not done so, this editorial would have called on her to withdraw. Almost from the moment she entered the race, Zhao received criticism for her comments in 2013 opposing Assembly Bill 1266, the bill authored by gay former Assemblyman Tom Ammiano (D-San Francisco) that ensures transgender youth have the opportunity to fully participate and succeed in schools across the state. Governor Jerry Brown signed the bill later that year, which allows trans students to use bathrooms and join sports teams consistent with their gender identity. According to translated comments made at a news conference opposing AB 1266 that was reported in the Chinese-language press, and published by http://www.48hills.org, Zhao said the bill would "lead to public moral issues, violence, and even create conditions for more incidences of rape on school campuses." She also said allowing trans students to use their desired bathroom "offends and violates the rights and privacies of the other 98 percent."

However, last week, the San Francisco Examiner reported that Zhao was telling Mandarin-speaking supporters that she still opposes trans restrooms, while giving a different message in English, saying she supports them. Columnist Joe Fitzgerald Rodriguez wrote that he obtained text messages with those conflicting views, and that Zhao still does not support gender-neutral restrooms. Last Friday, the co-chairs of the Alice B. Toklas LGBT Democratic Club called on her to leave the race. Eric Lukoff and Gina Simi stated in an Examiner op-ed that Zhao's statements "fuel misinformation and hate."

We believe that Zhao is not an ally to the LGBT community. Simply put, we don't trust her, because clearly her initial apology was insincere. Her opposition to gender-neutral bathrooms, which are now law in California, makes her unfit for public office - now and in the future. Rodriguez's reporting, and a similar article by Joe Eskenazi at Mission Local, instead show political opportunism at its worst. Zhao cynically expressed her views to solidify her base in the Chinese community, while telling the English-speaking San Francisco political establishment what it wanted to hear.

And of that political establishment ... we remain troubled that gay state Senator Scott Wiener (D-San Francisco) was an early and strong supporter of Zhao's, as was Mayor London Breed. Some politicians, notably District 2 Supervisor Catherine Stefani, severed support and withdrew their endorsements of Zhao last month. Other political leaders, especially the LGBT ones, should have immediately followed suit, and it's unfortunate that they failed to do so.

Trans kids in this country are under siege today. They are taunted and relentlessly bullied on social media and in real life. More and more parents support their trans kids, only to find roadblocks at school, especially regarding bathroom and locker room use. When bullying and taunting happens at school, administrators, staff, and the school board must support trans youth. That can be done through proactive measures such as holding assemblies, and most importantly, district-wide policies that are clear, fair, and implemented. That's what a school board does, and that's why Zhao was not a good choice to sit on it.

SFPOA sends wrong message
The San Francisco Police Officers Association is sending the wrong message with its opposition to Mayor London Breed's plan for a safe injection site pilot program. On Monday, the SFPOA released a public service announcement that says its members "are not confident that this is the right approach." Instead, the association stated, drug addicts deserve a pathway to recovery. Here's the thing: supervised injection sites, where people can use drugs under the watch of staff, are a pathway to recovery. Safe injection sites provide sterile needles, which prevents transmission of HIV and hepatitis B and C, and offer clients an entry point for seeking medical care and addiction treatment. Indoor sites also reduce street-based drug use and improper syringe disposal, seen as a growing problem in the city and an issue that the police are familiar with. In fact, it could be argued that the supervised injection sites would help officers, because it would move some street-based drug use inside.

The SFPOA is worried that drug dealers will "set up shop" around any safe injection site, or might be inside the sites. We don't think that will be an issue, and if it happens, then the whole model of this harm reduction strategy will need to be reassessed. If it is anything like the recent Safer Inside demonstration project that was open for a few days in late August, it will resemble a medical site.

In the meantime, the SFPOA is playing on the fears of residents, when it should be working with the mayor and other officials to make these programs as effective as possible. "I have tremendous respect for San Francisco police officers," gay District 8 Supervisor Rafael Mandelman told us. "But they're wrong on this."

Police should be one of the backers of the safe injection pilot program. The union's opposition is shortsighted and combative. It is counterproductive as we wait for Governor Jerry Brown to take action on Assembly Bill 186, which would establish the pilot program for San Francisco. This plan has broad support in the city, it's time for the police to embrace a new and innovative approach, which is what the SFPOA also stated it wanted to do in its announcement. We are confident that, if Brown signs the bill, city leaders will seek input from the police, as well as others, to see how the pilot program will impact residents. The current situation regarding street drug use is unacceptable. Breed and others should be applauded for their bravery to attempt a radical response to the growing injection drug crisis, and Brown should sign AB 186.