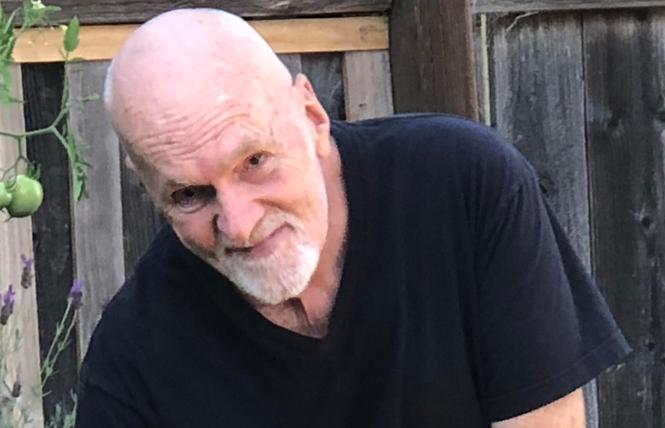 Mike McNamee, a gay leather man who owned the popular Stompers Boots in San Francisco's South of Market neighborhood for many years, died August 23 at California Pacific Medical Center after a brief illness, friends said. He was 79.

Mr. McNamee, who had enjoyed a successful career as a television news photographer, bought the building that housed Stompers, at 323 10th Street, in 1989. At the time, it housed a real estate office and then was the office of City Bike, a motorcycle magazine. After City Bike moved, Mr. McNamee opened Stompers, as the neighboring leather store did not sell boots. He lived above the store, recalled his longtime friend, Peter Haase.

The store's concept was based on Stompers Boots in New York City, which had closed 15 years earlier, his friends, David King and Gayle Rubin, wrote in separate emails.

"Stompers in New York was owned by Lou Weingarden; it was a boot store in the front, and one of the first leather art galleries in the back," Rubin, a lesbian longtime San Francisco leather community member and associate professor at the University of Ann Arbor in Michigan, wrote. "Stompers was instrumental in the legitimation of gay male leather iconography as an art form, a movement that was also facilitated by the Fey-Way Studios here in San Francisco and by the Leslie-Lohman Gallery, also in Manhattan."

King wrote that the shop opened in September 1996, just in time for the Folsom Street Fair. "And the first of the annual Stompers backyard boot parties, which later expanded to also include Dore Alley Fair," King wrote, referring to what is now known as the Up Your Alley Fair and is held in late July.

By all accounts, those boot parties were infamous.

There was no cover charge, Haase recalled. "You only had to be wearing boots. (Some guys only wore boots)," he wrote in an email. "Those parties were wonderful, and perhaps the most visible aspect of Mike's generosity to the community."

REX, a gay San Francisco artist who uses only one name, wrote in an email that Mr. McNamee was "a legendary SOMA figure and fixture of the San Francisco leather/biker scene in the 1970s, 1980s, and 1990s."

"A passionate Harley-Davidson biker, he was famous for his open house parties during the Folsom Street Fair each year that he hosted at his shop and garden behind featuring free food, drink, and good company," REX wrote. "Mike was a unique individual who will be sadly missed by all who knew him in the San Francisco SOMA scene."

Haase said that he got to see a particular aspect of Mr. McNamee's creativity when he created Stompers' website in 2002. (The website first went online in 1997, according to Larry Faulks, the first webmaster.)

"He was definitely a visually-oriented man, excellent with both still and video cameras, and he gave the site a terrific look (and lots of great shots of boots and leather)," Haase wrote.

"But what I really loved was the copy that he wrote for the site," Haase added. "He had a knack for writing words that 'talked the talk' of Stompers Boot Shop. His copy spoke to 25-year-old guys looking for their first pair of work boots, as well as older men who'd walked many miles in theirs. I often complimented him on that, but he waved it away.

"He just knew how to create an environment that got both men and women into boots, and that was because he loved the things," Haase wrote.

Mr. McNamee sold Stompers in 2011 and it eventually became an online store, now based in Florida.

On the website, the current owners paid tribute to Mr. McNamee.

"We here at Stompers Boots would like to take a moment to commemorate the memory of Mike McNamee, the founder and original owner of Stompers Boots in San Francisco, now located in Fort Lauderdale and owned by Christian Marcello and Bear Man," the owners wrote. "We were honored to know him and will continue to carry on his legacy."

Prior to arriving in the city, Mr. McNamee worked for a Sacramento TV station, and then a station in Washington state.

Once in San Francisco, Mr. McNamee began a long career at KRON 4, where he worked as a news photographer, Don Sharp, his former supervisor, told the Bay Area Reporter in a phone interview.

Mr. McNamee went on assignment for KRON to China and Japan, Sharp said.

"We had just finished the Democratic convention in San Francisco, which was the same year as the Olympics," Sharp said. "He says, 'Don, are you going to send me down to LA? Well then, can I ride my motorcycle to LA?' It was the second time he did that. He got down there, and we got great rolling shots from Mike's motorcycle."

The station had previously opened a bureau in Washington, D.C., Sharp said, and Mr. McNamee rode his motorcycle across the country when he worked there.

"He lived on the edge with that motorcycle," Sharp said.

Sharp, who is straight, said Mr. McNamee "never tried to hide himself in the closet."
"He and I used to have these great conversations," Sharp said.

"He worked with all the photographers and editors and genuinely tried to please everyone, which wasn't easy," Riordan wrote in an email. "Mike was a very funny, very sweet, masculine guy. We were all together back in May for a reunion of former and current KRON employees and he was there. He was very happy."

King said that Mr. McNamee retired from KRON around 1998, prior to the sale of the station to Young Broadcasting.

'Miracle Mile'
Haase wrote that Mr. McNamee "was definitely a product of the Folsom Street "Miracle Mile" of the 1960s and 1970s. "He knew all the bars, and saw it all. And with his death we have lost one of the last men of that era," he wrote.

Ken Hedrick, a Stompers customer, wrote in an email that he approached Mr. McNamee in 2010 when he heard he was interested in selling the store. There had been complications around finances, and Mr. McNamee ended up putting almost all of his personal assets into the operation, Hedrick wrote.

"When I (and my late husband, Walter Huxley) took control of the operations, he was at a low point," Hedrick wrote, "but with grace and character, continued forward."

Mr. McNamee continued to work for the store by redesigning the website, sending out weekly sales flyers, and occasionally worked the floor, as well as acted as an adviser, Hedrick wrote.

For Noel Plemmons, Mr. McNamee "was the gay role model that so many of us didn't get to have because of AIDS," he wrote in an email.

"Somehow, Mike was able to avoid the virus and lived to see many friends pass, but to also be a father figure for a younger generation of us," Plemmons wrote. "He liked to pretend he was a bad boy, but he really was one of the most principled people I knew."

Rubin wrote that Mr. McNamee was involved as a member of the committee that selected the names to be recognized on Ringold Alley.

Officially known as the San Francisco South of Market Leather History Alley, it consists of bronze bootprints honoring men and women who left a lasting imprint on the city's leather community during their lifetimes.

The bootprints are made from the left and right soles of a pair of Dehner boots owned by Mr. McNamee, Rubin pointed out.

Haase recalled a visit to South of Market with Mr. McNamee a couple of years ago.

"We walked to a bistro a few blocks from his home," Haase wrote. "Stompers had been sold (twice by that time) and the website he loved had been replaced with some generic thing. He looked around the bistro and saw young men staring at laptops, and looked out the window to see new Audis, BMWs, and Lexuses driving by. He said, 'SOMA has moved on, and that's just the way it goes. It's probably time for me to move on, too,'"

Mr. McNamee moved to Santa Rosa in 2017, with his husband, Jimy Sylvia, and their dog, Emit. Sylvia did not feel up to speaking with the B.A.R.

"He loved his new home and garden," Hedrick wrote, adding that Mr. McNamee visited him in Palm Springs in May.

There will be no funeral or official memorial service, King wrote. For people in the Bay Area, the monthly BLUF/Hotboots leather event at the SF Eagle, 398 12th Street, Saturday, September 8, at 9 p.m. (no cover charge if in leather) may be a good occasion for people to gather to remember Mr. McNamee.

Updated, 9/10/18: This article was updated to reflect when the store first had a website.