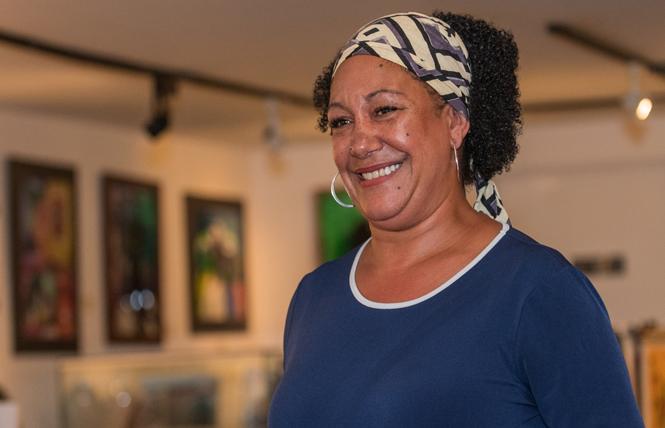 After more than a decade fighting for the people of Oakland, both in the streets and the halls of government, Cat Brooks decided to run for mayor after she saw first-hand how some of the city's most marginalized residents struggle to survive.

"I asked some housing advocate comrades of mine to take me to the [homeless] camps," she said during a recent interview. "Driving by them is one thing, but I wanted to go inside. I did that."

"It's horrific. There's no words for what it's like inside of there," she said. "I learned later that finally [Mayor] Libby [Schaaf] had been cajoled into going to see the camps. She had the ability to see what is happening in those camps, to see people with bite marks from rats, which are eating them alive, to see women who are claiming husbands because they're tired of being raped, to see the drug dealing, to see the needles, to see the gaping sores on peoples' skin. She saw it.

"Which means she had the ability to go back to City Hall and say 'Enough. I don't care what the rules are. Move (on this)'" Brooks said. "And she didn't.

"I had a crisis of conscience that day," Brooks said, as she remembered how she felt about the city's inaction in the face of a crisis. "I can't make it make sense in my head. It's like how I stayed up one night as a kid trying to figure out how someone could hate me because of the color of my skin. It was that kind of a moment."

To many, the housing crisis in Oakland seems as intractable as the structural racism that contributes to it. However, Brooks, an African-American woman who was born and raised in Las Vegas before relocating to Oakland over 12 years ago, has made a career of challenging seemingly intractable problems, most notably through her work with the Anti Police Terror Project, which she co-founded in 2014.

"On January 1, 2009, Oscar Grant was murdered by then-BART police officer Johannes Mehserle, and Oakland erupted," she said. "I got pretty consumed with that struggle and after the initial rebellions happened, the black and brown folks who were leading those rebellions in large numbers went back to work or home or to take care of their families and what remained were very well-meaning white allies and comrades. But they were white allies and comrades without an analysis that black people should be leading issues that most dramatically impact black people."

Meanwhile, "The state just kept killing us, not only here in Oakland, but across the country," she said. "We were doing a lot of protests of power in the street all the time. We could and did call up people by the thousands - we were in the leadership in the marches after Trayvon Martin, for example."

It was those experiences that caused her to ponder a deeper strategy.

"Because we were all organizers, we had a conversation about what we were actually doing," Brooks said. "Sure, it felt good to be in the streets, it felt good to scream at police and it was important - we believe protest is important, it impacts the public debate, reporters cover it, it impacts the public conversation - but what we're interested in is movement building.

"What we're interested in is a qualitative change and transformation of the conditions that our people are living in and an end to the police violence in our communities," she said. "Simply protesting wasn't going to cut it."

Enter the APTP, which combines public advocacy and direct action with support for the survivors of those killed by police violence, which Brooks said is especially critical.

"We've worked with more families than I count - and I've only met two who were organizers or activists in some right of their own already," she said. "You're talking about families who are going about their daily lives when this horrible thing happens to them and then not only does law enforcement not support them, they terrorize them.

"We wanted to create an organization that could walk families through that process and we wanted communities to feel empowered," Brooks said. "It's a very hopeless feeling when things keep happening to you, which is a common story for black people, for brown people, for indigenous people in this country."

After four years of work by APTP and allied organizations, Brooks said that feeling is starting to change locally.

"We have worked with media successfully to change the way they talk about police violence," she said. "The media no longer just allow the Oakland Police Department to put out their statement (after an officer-involved shooting); they're always coming to check with us. We've been a consistent and continuous voice around police violence."

Theirs is also a voice that appears to be heard by those with the badges and guns.

"The OPD has only killed one person since November 2015," Brooks said. "That's not because there's been some great shift within OPD on how they view black and brown bodies; that's a tactical and strategic decision because it's clear there's a base of people who will force accountability."

Even when police guns are silent, Brooks said, it doesn't mean communities of people of color are not suffering at the hands of those the state claims exist to protect them.

"Why are we only responding when they kill us when we know police violence happens in our communities every single day, from sexual assault - which is the primary way women of color experience state violence - all the way up to murder?" Brooks asked. "Why, if we know that the number one cure to the ailment of police murder is no engagement, are we not generating conversations about what does it look like to not rely on law enforcement for community security and what happens to families?

Unaddressed problems
It's that kind of focus on problems that previous administrations have left unaddressed that Brooks wants to bring to City Hall.

"It's going to take time to undo what's been done," she said. Even so, if she wins "the immediate thing that changes is the direction that law enforcement is given in how they do and do not patrol our communities.

A good example, she said, is the planning commission.

"The planning commission is a seven-person body," Brooks said. "As of a couple of weeks ago, there are two out of the seven who are not directly tied to Realtors or developers."

Regarding the housing crisis, Brooks wants to act both tactically and strategically.

"It's critical that we repeal Costa-Hawkins, but we have an immediate crisis in the streets of Oakland that we can do something about," she said, referring to the statewide law that restricts the ability of cities and counties to impose rent control and is on the ballot as Proposition 10.

Her ideas include rezoning and modifying vacant city warehouses to serve as temporary housing, working with school districts to re-purpose closed schools, which already have bathrooms and other infrastructure, to shelter people who are homeless.

"There are things we can do right know while working on the longer-term solution of permanent housing and jobs which, for whatever reason, the city is just not doing," she said.

Eight other candidates besides Brooks are running to unseat Schaaf in November, but the only one who comes close to Brooks' name recognition is local civil rights attorney Pamela Price, an African-American woman who was defeated in June in her run for Alameda County district attorney.

While Brooks declined to comment on Price's recent decision to enter the race, she's clear-eyed about the general task ahead of her.

"It's going to be hard - hard as hell," she said. "But what if all our energy was used to build the most progressive city in this country?

"Under the 45 administration, fighting locally makes the most sense," she said, referring to President Donald Trump, adding with a smile, "and who knows how to fight like Oakland?"

Non-citizen voters may have cause for concern
Several months ago, the City and County of San Francisco announced to great fanfare that non-citizens who were the parents or guardians of children attending classes in the San Francisco Unified School District would be able to vote in school board elections, beginning with the November ballot. At the time, giving parents a direct voice in the management of the schools their children attend was billed as a great leap forward, but the way it's being implemented is leading many to wonder if it's really two steps back.

That's because the city is sharing the information provided by non-citizens who do register to vote in school board elections with Immigration and Customs Enforcement. Given that voting in American elections "in violation of any federal, state, or local constitutional provision, statute, ordinance, or regulation" renders one not only inadmissible but deportable under the Immigration and Nationality Act, any non-citizen who registers and votes could be putting themselves and their families in the agency's crosshairs. While the city's charter allows non-citizens to vote in school board elections, only the brave or the foolhardy would assume that an agency like ICE - whose agents often see constitutional requirements more in the nature of guidelines rather than binding rules - would think that the city's take is the one that controls the matter.

Indeed, the Department of Elections openly states on its website that it is collaborating with ICE - and confirmed this in an email to a local activist, which is now in Resist's possession. According to the department's email, "This is a policy consistent with all voter registration information for the City and County of San Francisco."

While I'd contend the department has no business collaborating with ICE at all, especially given the provisions of the sanctuary city ordinance (which, among other things, prohibits "Assisting or cooperating, in one's official capacity, with any investigation ... public or clandestine, conducted by the federal agency charged with enforcement of the federal immigration law") it's especially egregious in the case of non-citizen school board voters. There's a clear distinction between that (largely fictional) fascist bugbear of people who intentionally register and vote in general elections who aren't entitled to do so and San Francisco parents and guardians who wouldn't have registered to vote if the city hadn't amended its charter to give them the ability to do so in school board races - and who the city is now putting on ICE's radar.

Registration closes October 22 for the November ballot, so there's still time - if only just - for the city to fix this injustice if there's the political will to do so. If there isn't, San Francisco will have shown yet again that its commitment to protecting immigrants is more rhetorical than real.