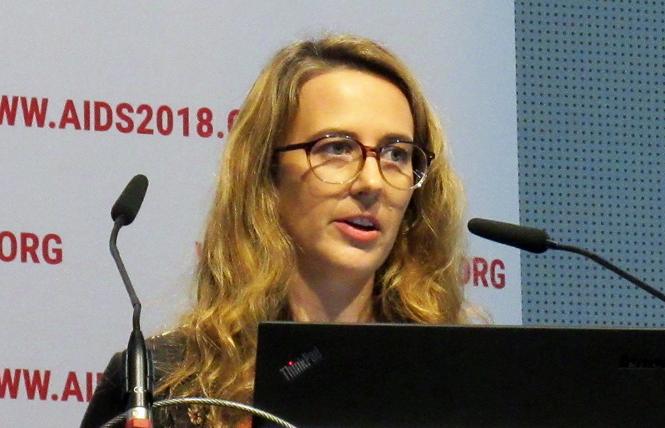 The proportion of people with HIV who achieve viral suppression has risen dramatically across the United States over the past two decades, but young black men are not seeing the same gains, according to a new study.

Locally, research presented at the International AIDS Conference last month in Amsterdam shows that reducing the amount of time spent with detectable viral load has coincided with a decline in new HIV diagnoses in San Francisco, providing further support for the "undetectable equals untransmittable" message. But here too, not everyone is benefitting equally.

Viral suppression trends
Dr. Heidi Crane from the University of Washington in Seattle and her team looked at trends in viral suppression among nearly 32,000 HIV-positive people receiving care at eight U.S. sites, including UCSF, between 1997 - soon after the introduction of effective combination antiretroviral therapy (ART) - and 2015.

The proportion of people achieving viral suppression, defined as an HIV level of 400 copies or less, rose from 32 percent in 1997 to 86 percent in 2015. Older individuals and those who used integrase inhibitors were less likely to have detectable viral load, while African-Americans and people who inject drugs were more likely.

The amount of time it took to achieve viral suppression after ART initiation fell from nine months for those starting treatment during 1997-2000 to two months for those who started during 2010-2015.

The UNAIDS "90-90-90" targets call for 90 percent of people with HIV to know their status, 90 percent of diagnosed individuals to be on ART, and 90 percent of treated people to achieve viral suppression - which works out to 73 percent of all HIV-positive people being undetectable.

The U.S. has not yet met this goal - in 2015 the undetectable figure was 51 percent - but the new findings show that the third target is within reach. The diagnosis target has also almost been met (86 percent in 2015), but the proportion of people starting care (63 percent) and remaining in care (49 percent) are still falling short.

Maximizing viral suppression among people living with HIV is one of the keys to reducing new infections, along with PrEP for HIV-negative people.

"For treatment as prevention to help achieve the goal of ending the HIV epidemic in the United States, it is critical to understand, address, and bridge implementation gaps," Dr. Anthony Fauci and co-authors from the National Institute of Allergy and Infectious Diseases wrote in an editorial accompanying the study in the Annals of Internal Medicine. "[T]he Achilles' heel of treatment as prevention is the inability to bring people living with HIV into care."

Advances in San Francisco
Fauci and colleagues noted that rapid initiation of ART, as pioneered in San Francisco, is one strategy to bridge the gap in linkage to care. Requiring people to come back for additional appointments and pharmacy visits after diagnosis means some will fall through the cracks. The RAPID program aims to start people on treatment as soon as possible, ideally giving them a starter pack of medication on the day they're diagnosed.

Research presented at the AIDS conference showed that rapid initiation of treatment after diagnosis, which has shortened the length of time people spend with unsuppressed viral load, has coincided with a drop in new infections.

In 2010, San Francisco was the first city to recommend universal ART for everyone diagnosed with HIV, two years before federal guidelines. The RAPID treatment protocol was piloted in 2013 and 2014 at Zuckerberg San Francisco General Hospital and implemented citywide starting in 2015.

Alison Hughes and colleagues from DPH assessed how much time individuals newly diagnosed between 2008 and 2016 spent with unsuppressed viral load. At the start of this period, people spent 62 percent of their first year after diagnosis with HIV levels above 1,500 copies - the level associated with a reduced risk of transmission. After the advent of universal treatment this proportion fell to 39 percent in 2012, and after RAPID implementation it decreased to 25 percent in 2016.

People who inject drugs, homeless individuals, and young adults age 25 to 29 were more likely to have longer periods of detectable viral load, though this analysis saw no racial differences.

Another study at the conference looked in more depth at the impact of homelessness on viral suppression among low-income cisgender (non-transgender) women in San Francisco.

Elise Riley from UCSF reported that 60 percent of the women had detectable viral load at least once over the course of the three-year study and about 20 percent had unsuppressed virus at all study visits. Every 10 nights spent homeless increased the risk of detectable viral load by 10 percent. Women who experienced sexual violence had more than double the likelihood and those who had been incarcerated were nearly four times more likely to have detectable viral load.

Even the intensive health interventions available in a well-resourced city are not enough to address the root causes of unsuccessful treatment for impoverished women with HIV, the researchers concluded.

"The problem isn't a failure to get care or case management, it's about poverty and it's about homelessness. There needs to be larger polices around housing people and more supportive housing," Riley said.

"We're trying to work with patients to figure out strategies to work around this, but it's hard," she told the Bay Area Reporter. "When you don't have housing there's no place to put your medicine and you don't know if your stuff is going to be stolen. It leads to a cascade of other things like food insecurity and violence. It's challenging to work on this when you know that what someone really needs is housing, but it's just not there."