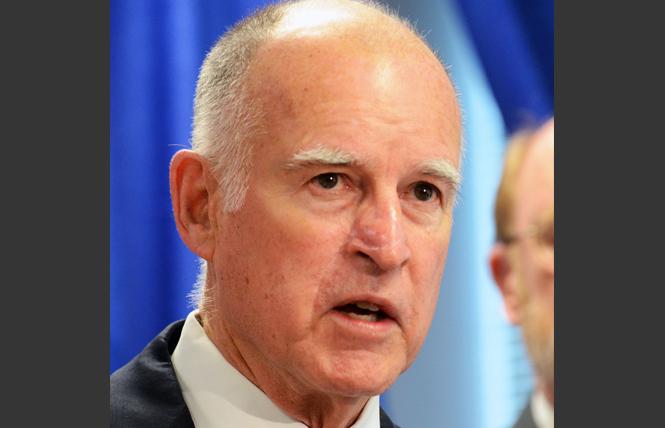 The state legislative session ends this week, so bills are busily being passed out of the Assembly and Senate on their way to Governor Jerry Brown's desk. There are two bills that we urge Brown to sign.

Teacher training
Our articles last week concerning education previewed support for Assembly Bill 2153, authored by Assemblyman Tony Thurmond (D-Richmond). This legislation adds to the Education Code relating to in-service training for teachers. Specifically, AB 2153 would require each school operated by a school district or county office of education, and each charter school, to annually provide in-service training to teachers of students in grades seven through 12, and to all other certified school employees on school sites and community resources for the support of LGBTQ pupils. It would also require strategies to aid support for LGBTQ students and thereby improve the overall school climate.

Thurmond, who is running for state superintendent of public instruction, would be in an ideal position to see this legislation through, should he win and should the governor sign it. He has already reached out and held workshops at schools in various parts of the state to promote acceptance of LGBTQ students and safe schools.

The bill is one of Equality California's priorities. Brown may be hesitant to sign it because of the expense. While no figure is mentioned, it likely will cost millions of dollars to implement this in-service training in hundreds of districts, counties, and charter schools. If California is going to lead on LGBTQ student issues, its teachers and school staff need to be kept abreast of new policy developments, strategies for combatting bullying, and community resources like LGBT centers. Transgender students are currently protected regarding accommodations and sports activities, thanks to gay former Assemblyman Tom Ammiano's AB 1266; but there are pockets of resistance throughout the state, and teachers need to know how to address those concerns.

We know the governor errs on the side of fiscal conservatism, but this is one time when he should approve the legislation. AB 2153 has stalled in the past, but this year passed out of the appropriations committees, which is no small feat. Now is the time for Brown to sign the bill so that LGBTQ and straight students can benefit from the training their teachers receive.

It's all about the next generation in terms of wider LGBT support. AB 2153 will help accelerate that in an important way.

Safe injection sites
On Monday, the Assembly passed AB 186, authored by lesbian Assemblywoman Susan Talamantes Eggman (D-Stockton) and co-authored by gay state Senator Scott Wiener (D-San Francisco). It would allow San Francisco to open safe injection sites under a three-year pilot program. The state Senate approved the bill last week, meaning it's now on its way to Brown's desk. He must sign it.

AB 186 is just one part of San Francisco's plan to help homeless people who use injection drugs. Supervised injection sites allow people to use drugs under the watch of trained staff, reducing the risk of overdose deaths. A similar bill was narrowly defeated last year, and the fact that it passed the Legislature this year is a testament to the dogged support of city leaders and increased awareness of the need for such programs by lawmakers.

Mayor London Breed is solidly behind the bill and this week opened a demonstration project of a safe injection site so that the public can better understand the program. Drugs at the site will not be permitted during the project, called Safer Inside, which ends August 31.

As Breed said in a statement lauding the Assembly's passage of AB 186, "We are in a public health crisis and this bill will help us by preventing overdoses while connecting people to medical care that can help treat their addiction."

It's time that people understand that addiction is not a crime, it is a public health issue. San Franciscans are tired of seeing people shooting up drugs in public - a pilot program like Safer Inside will help alleviate that. It will also likely save the city money, as ambulance trips and emergency room costs may decrease.

We are at a point where something new must be done. The supervised injection site three-year pilot program is one attempt at a solution, and we won't know if it will help unless it can be tried.