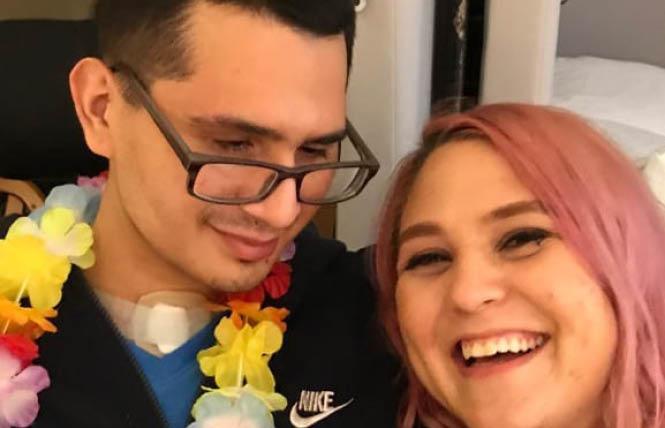 After being in a coma for months, Aaron Salazar, the gay Amtrak passenger found severely injured on the side of the tracks in Truckee, California in May, is now conscious and speaking. The 22-year-old has been moved to Craig Hospital in Englewood, Colorado, a rehabilitation facility that specializes exclusively in spinal cord and traumatic brain injuries, according to his family.

Salazar was a passenger on an Amtrak train traveling from Denver to Portland, where he was attending Portland State University. Salazar reportedly never made it to the train's layover destination in Sacramento. He was found lying near the railroad tracks at the far east end of Truckee May 15, Truckee Police Chief Rob Leftwich said in a statement that month.

Salazar suffered major injuries and was transported to a hospital in Reno. He was reported to have multiple head injuries, with an MRI showing damage to his brain stem, a broken pelvis, and severe burns near his groin and upper thighs.

"When asked about the train, he sadly, cannot remember, which, after speaking to the doctor, is normal due to a mix of both the injury, and his brain protecting him from the traumatic event, although with time, and therapy, he might be able to remember things on his own," Sailas' post read.

On August 11, Sailas posted to the GoFundMe page set up for Salazar, which has raised over $68,000, that Salazar was using a wheelchair for the first time and eating solid food.

Critical of police
The Salazar family has been critical of the Amtrak Police Department's investigation of the incident, which is still ongoing. At a May 29 news conference, Amtrak Police Chief Neil Trugman said that Amtrak believes the young college student was "very distraught" while on the train and may have attempted suicide. The family strongly disagrees with this narrative and believes Salazar was attacked and is calling it a hate crime. Amtrak is the lead on the investigation.

Family members want the FBI to take over the investigation and started an online petition in July to garner support. Nearly 62,000 people have signed the petition.
Amtrak spokeswoman Olivia Irvin emailed the Bay Area Reporter a statement on behalf of the Amtrak Police Department August 15, which stated there are no signs of criminal activity.

"The investigation remains open, pending any new information or the opportunity to interview Mr. Salazar," the statement read. "After an extensive investigation by the Amtrak Police Department, in coordination with other local, state, and federal law enforcement agencies, there is no indication of criminal activity at this time."

The Salazar family has been frustrated over the lack of information Amtrak has given them throughout the investigation. The family has claimed Amtrak did not take any forensic evidence and claim they saw blood under Salazar's fingernails, indicating to them self defense. They are also skeptical of the thoroughness of Amtrak's investigation.

Sonja Trujillo, Salazar's cousin, told the Los Angeles Blade that the investigation has stalled and said Amtrak investigators and Trugman have ceased direct communication with the family. Now, Amtrak's corporate attorneys are handling all communications, according to the Blade.

At the only news conference to date about the investigation in late May, with Amtrak and the Truckee Police Department, which initially responded to the call, details were shared as to why Amtrak believes it to be an attempted suicide.

"There is no physical evidence or witness statements to [suggest] a physical altercation occurring on the train," Trugman said at the news conference.

He said investigators spoke with 300 customers, crewmembers, and Salazar's friends, and said that "individuals who noted interactions with Mr. Salazar shared that he expressed to them a number of life concerns and challenges he was having."

Trugman said at 9:27 a.m. May 15, "a Union Pacific Railroad foreman adjacent to the tracks saw the Amtrak train go by with an open window on one of its coaches, but did not notify Amtrak at that time."

Trugman confirmed Salazar was found at 11:10 a.m. by Union Pacific workers between Reno and Truckee.

Trugman said that the open window was not a passenger window, but a window used by conductors and train employees, although it is accessible to passengers. The window was attached to one of the exit doors. He also said that a similar incident had occurred previously in which a passenger jumped from an exit door window while the train was moving.

Salazar's family claims the evidence of the incident being a hate crime includes what they believe to be signs of self-defense, including blood under Salazar's fingernails and scrapes and bruises on his knuckles and hands.

There were burns near Salazar's groin, something the family said is not consistent with injuries that could result from jumping off of a train.

When reporters at the news conference asked Trugman about the burns near Salazar's groin, he explained that they "have a good explanation for that." He has not disclosed that reason.

LGBTQ Update is a weekly online column addressing issues affecting the community. It runs on Tuesdays, but will take next week off for Labor Day, returning September 11. Submit comments or column ideas to Alex Madison at (415) 875-9986 or a.madison@ebar.com.