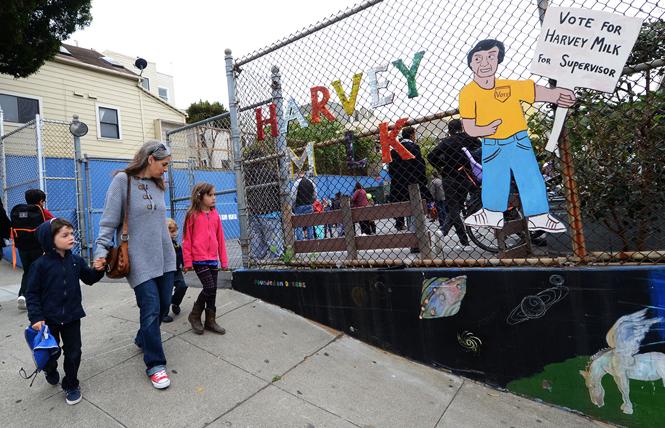 Parents drop off their children for the first day of school at the Harvey Milk Civil Rights Academy in the Castro Monday, August 20. Photo: Rick Gerharter

Nearly a year after California education officials approved for use a number of textbooks that included lessons on LGBT history, it appears that few students in the state will be using them this school year.

LGBT history is being taught to schoolchildren throughout the state as school districts use other materials to incorporate the lessons into their curriculums. But for a variety of reasons, from parental pushback and teacher concerns to budget constraints and lengthy review processes for selecting new educational materials, the rollout of the LGBT-inclusive textbooks by school districts will take years to reach every classroom.

"We haven't seen these schools get on board with these new textbooks yet. We have seen a lot of schools dragging their feet," said Dominic Le Fort, executive director of Queer Education, a year-old nonprofit that works with public and private schools in southern California on how to teach LGBT subjects.

The same is true with school districts in northern California, even in the liberal Bay Area, according to Our Family Coalition, a San Francisco-based nonprofit that advocates on behalf of LGBT families and has been working for years to get LGBT curriculum into the state's schools.

"I think the challenging part is we still have dissenting and oppositional voices in our communities that are creating barriers. There is still a lot of miseducation and fear around inclusive education," said Tarah Fleming, the agency's education director for the past nine years.

In terms of school districts purchasing the LGBT-inclusive textbooks, Fleming told the Bay Area Reporter that most are "committed" to buying them but are just beginning the process to adopt them.

"Ready to go definitely is not the words I would use," said Fleming, who stressed, "it is going to be a continuous rollout. Some schools are doing it now and some schools will take years."

First in the nation
California last fall became the first state in the nation to approve textbooks that include lessons about the LGBT community and its history. The state Board of Education voted in early November to approve 10 LGBTQ-inclusive history and social studies textbooks for K-8 classrooms.

The state board's decision stemmed from the passage in 2011 of the Fair, Accurate, Inclusive, and Respectful Education Act, authored by gay former state Senator Mark Leno (D-San Francisco), which required school districts to teach students about LGBT individuals and people with disabilities. After the bill's passage, educators and LGBT activists developed curriculum standards to implement the FAIR Act.

The final step was the approval of the textbooks, which school districts can now purchase. They are allowed to choose other materials, however, as long as they include the required LGBT content and other lesson plans detailed in the state education agency's History/Social Science Curriculum Framework.

One of the first school districts in the Bay Area to buy the new schoolbooks was the Oakland Unified School District. Despite facing a multi-million dollar deficit, the East Bay district was able to allocate $1 million during the 2017-2018 school year toward the purchase of roughly 7,300 textbooks for students in grades six through eight and 200 teacher editions of the new history/social science textbooks that include the LGBT content.

John Sasaki, the district's communications director, told the B.A.R. that the curriculum package included "consumable student workbooks and online resources" in addition to the textbooks.

"During the 2017-18 school year, OUSD conducted a piloting and selection process for grades 6-8 and 4-5. Due to budget constraints, the district was only able to purchase updated materials - Pearson's MyWorld curriculum - for grades 6-8," Sasaki told the B.A.R. "Because of our current budget challenges, we are trying to determine when we will be able to purchase these materials for other grades."

On the Peninsula, the San Mateo County Office of Education in March hosted an instructional materials fair for area schools. But it does not track what, if any, textbook purchases the individual districts made, said Gary Waddell, a gay man who is deputy superintendent of the county education office's instructional services division.

"We have included the requirements of the FAIR Education Act in our training with districts around the new History/Social-Science Framework and have begun gathering and posting resources for districts to use digitally," Waddell told the B.A.R. "Our HSS team is in planning process to deliver training specific to the FAIR educational act and LGBTQ-inclusive materials."

The county office expects that a number of the districts within its jurisdiction are going through internal processes to select materials this year. Typically, explained Waddell, districts utilize a materials selection process where a committee of teachers review and evaluate various textbooks on a number of criteria and then take a recommendation to their district leaders on which ones to purchase.

"Local districts in San Mateo County are selecting and piloting materials now from the new materials," he said. 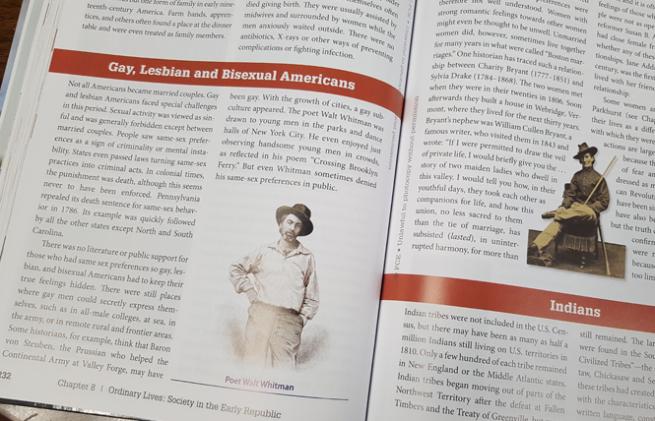 SFUSD
The San Francisco Unified School District, whose students returned to classrooms this week, has not purchased any of the new history textbooks for use during the 2018-2019 academic year. However, for a number of years now, its teachers have used LGBT instructional materials in their classrooms that the district has generated on its own in partnership with education experts and community consultants, noted spokeswoman Laura Dudnick.

In an interview with the B.A.R. Brent Stephens, the district's chief academic officer, said that San Francisco educators have been working the last few years to ensure their lesson plans are in alignment with the state's revised framework for history and social science.

"We work with our educators to take the time to understand the framework. When we make a selection for new textbooks in history, it will be informed by the participation of our educators," explained Stephens.

Currently, the district is rolling out new science textbooks in all of its schools, having begun the process to update its science curriculum several years ago, noted Stephens. This fall a group of teachers and district officials will begin evaluating the new history textbooks that incorporate the LGBT lessons and will then make a recommendation on which ones the district should buy.

Stephens predicted that the earliest they would make their way into classrooms would be at the start of the 2020-2021 school year. In the meantime, he stressed that the city's schoolteachers have a wealth of LGBT lesson plans they can choose from and use in their classrooms.

"I would hate for any LGBT family or advocate to think those books represent the district's only response to the needs of LGBT students. They should feel confident we have the tools we need to teach this material," said Stephens. "We are thinking of ways to infuse LGBT curriculum into all of our curriculum rather than as a separate topic. In my mind that is a more thorough response than thinking of this as a stand-alone topic for a few weeks in the year. We want to have it show up throughout the school year."

Slow to purchase books
It is unclear how many of the new LGBT-inclusive textbooks have been bought by school districts around the state. The B.A.R. contacted the seven history-social science instructional materials publishers approved by the state, and just three responded to requests for comment for this article.

Melody Anderson, the chief marketing officer for Studies Weekly, said she could not provide exact sales information. She would only disclose that within the Bay Area counties of Alameda, Contra Costa, Marin, Napa, San Francisco, San Mateo, Santa Clara, Solano, and Sonoma, 70 school districts had purchased curriculum from the company.

"Studies Weekly is in full compliance with California's LGBTQ+ social studies curriculum framework, engaging in fair and equitable coverage. Not only do we have the CA Board of Education's acceptance of our social content, we even made changes for the adoption based on the suggestions of the FAIR Act Coalition," replied Anderson. "We have a diversity board that reviews our scope in pre-production and reviews our legacy content so we may continually revise our materials to reflect the growing inclusivity movement in our society."

Nina Chang, a spokeswoman for McGraw-Hill Education, explained that, "for competitive reasons," the company does not disclose sales figures.

"McGraw-Hill Education's Impact: California Social Studies, a comprehensive series of social studies programs, was approved for adoption by the California State Board of Education and, yes, there are many school districts that are interested in these programs," wrote Chang in an emailed reply.

A different section on pioneer women includes stagecoach driver Charley Parkhurst, who was born a woman but lived life as a man. It wasn't until Parkhurst died that those who new him discovered that fact.

As Jarrett has promoted his textbook to educators, the response has largely been a lack of interest, he told the B.A.R. in an interview. Most districts have informed him they won't buy the book because they prefer to purchase ones that can be used in sixth through eighth grades.

"We are being totally ignored," he said. "Because we don't have sixth or seventh grade, many districts won't even look at the book. Even though we are half the price of bigger publishers."

Most districts he has contacted have told him they are piloting or purchasing textbooks from other publishers. This week, Jarrett reduced the per-copy cost of his textbook by $10 to $38.95 in hopes of spurring more interest from school districts.

"I think we have a unique treatment for gay, lesbian, bisexual, and transgender Americans. I would hope the gay and lesbian community would say this is a good book and that districts should, at least, look at it. I am quite disappointed," he said.

To assist educators in implementing the new LGBT-inclusive curriculum requirements, Our Family Coalition is hosting an inaugural "Make History, Teach History: An LGBTQ History Symposium" in San Francisco in October. Attendees will receive sample lesson plans and one-on-one coaching on how to mitigate and address potential concerns from parents or school administrators.

The agency expects all 150 slots for the conference will fill up and is planning to hold a similar symposium next spring in Los Angeles for southern California educators.

"They are definitely interested in having the conversations about the textbooks, how to use the textbooks, and how to get professional development for their teachers to be literate about the content in the textbooks," said Fleming of Bay Area school leaders.

Our Family Coalition's symposium will take place Friday, October 12. It is also hosting its seventh annual LGBTQ Inclusive Kindergarten and Preschool Fair next Thursday, August 30, at the San Francisco Day School. More information about both events can be found online at http://www.ourfamily.org/index.php.

The GLBT Historical Society, which is partnering with Our Family Coalition on the symposiums, will host its own forum on teaching LGBTQ history in California classrooms Wednesday, September 26, at its GLBT History Museum in San Francisco's Castro district. For more information and tickets, visit https://bit.ly/2OP8loW.