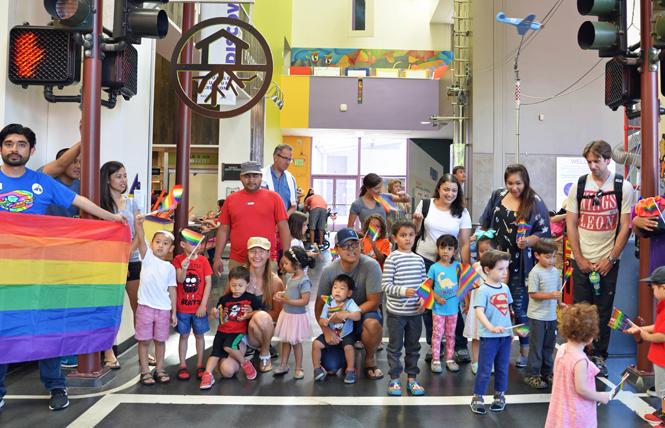 Kids and their parents prepared to march in a mini Pride parade last weekend that was part of Children's Discovery Museum of San Jose's Proud of My Family event. Silicon Valley Pride sponsored the parade, and this weekend holds the main event in San Jose. Photo: Jo-Lynn Otto

Silicon Valley Pride continues to add new events, and this year's festivities show there is more to celebrate under the theme, "Unity. Diversity. Strength."

New this year is a Trans and Friends Rally Saturday, and the Hey Girl women's stage and area at Sunday's celebration. Last weekend, Silicon Valley Pride teamed up with Children's Discovery Museum of San Jose's Proud of My Family event and sponsored a mini Pride parade for kids and their parents.

In addition to the parade and celebration, this weekend will feature many of Pridegoers' favorites, such as the Night Festival, Family Garden, High-Tech Pavilion, Leather Land, and a cocktail lounge.

It will be a flashback to the 1990s with Amber ("This is Your Night," "If You Could Read My Mind," and "Sexual (Li Da Di)") and Ultra Nate ("Free" and "Ultramanic") headlining the festival's main stage Sunday.

They will be joined by live performances from Opera San Jose's Katharine Gunnink, Trevor Neal, and Mason Gates, along with Ensamble Folklorico Colibri, Ab Soto, and La Misa Negra.

"I absolutely love our lineup at the rally," Sera Fernando, one of the organizers, wrote in an email. Fernando is working with the Pride board to produce the event and took inspiration from San Francisco's Trans and Dyke marches.

"The representation of trans talent that will be brought on stage at Plaza de Cesar Chavez will be spectacular," Fernando added.

"Having a trans event at Silicon Valley Pride brings awareness around gender identity," continued Fernando, a native San Jose trans woman who is pansexual. "I feel it's important to let them know that they are valued, accepted, and appreciated for living as their authentic self."

She hopes that the rally will "empower our community to achieve more."

As night falls the celebration will really get going with the third annual Night Festival from 6 to 11. The party, with a "Fantasy" theme, will feature some of the Bay Area's top DJs, including Rockaway, AX, Ayumi Winehouse, and Shugga Shay. The music will be pumping in four unique worlds: Under the Sea, Enchanted Forest, Good versus Evil (Heaven and Hell), and Space Odyssey, according to the July 5 news release from festival organizers.

On Sunday, the parade starts at 10 a.m. at Julian Street with marchers and more than 80 contingents taking over Market Street as they walk right into the festival at Plaza de Cesar Chavez, according to Silicon Valley Pride's website.

Festivalgoers will enjoy a variety of entertainment and connect with community organizations and local companies at the festival.

Thaddeus Campbell, CEO and president of Silicon Valley Pride, did not respond to a request for comment by press time.

Festival tickets are $5 per day. Some events are free and open to the public. For more information, visit http://www.svpride.com.