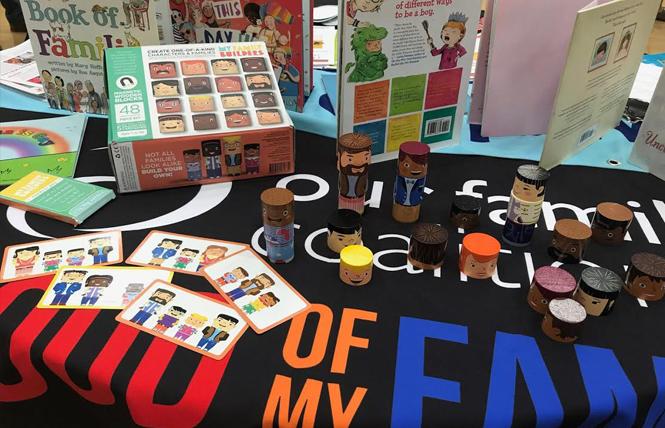 The inclusive school fair is for independent and public preschools and kindergartens. In addition to being a resource featuring dozens of San Francisco schools, OFC and its partners in education will offer information about the preschool and kindergarten application process; navigating San Francisco Unified School District systems; and opportunities for youth and family advocacy in San Francisco.

"For years, we have hosted this fair with the goal of supporting LGBTQ families in the search for the type of preschool, and now kindergarten, that will help their children thrive," OFC education director Tarah Fleming said in a news release.

The informational event will connect families with school representatives about their services and assess schools that are welcoming and inclusive of all families.

The event is free for families. For more information and to register, visit http://www.ourfamily.org.

Shop Out benefit for LGBT center
The San Francisco LGBT Community Center and the Fillmore Merchants Association will hold Shop Out, a benefit for the center, Saturday, August 25, from 10 a.m. to 8 p.m.

During the day, participating businesses in the Fillmore district will donate 10 percent of their sales to the LGBT center.

"We're thrilled to be part of Shop Out day once more," Jen Marticorena, assistant store leader at Eileen Fisher (Fillmore), said in a news release. "It's an honor to join our fellow merchants in support of the LGBT community and to shed light on the very positive effect the SF LGBT center has on our city."

Shop Out event started in 2016 as an evening during Pride and has now expanded into full-day events in multiple neighborhoods. In May a similar day was hosted by the Noe Valley Merchants and Professionals Association.

"It's wonderful to have the support of local merchants as we build a brighter future for the LGBTQ+ community together," she said.

Felicia "Flames" Elizondo, one of the organizers of the anniversary event, was a patron of the cafe in the 1960s. The riot occurred when transgender patrons of the former eatery protested police harassment one night in August 1966.

Irish pub to hold Oakland Pride party
Slainte, an Irish pub near Jack London Square in Oakland, will have a block party to celebrate Oakland Pride weekend Saturday, September 8, from 11 a.m. to 5 p.m.

Pub owner Jackie Gallanagh, a lesbian who was featured in the Bay Area Reporter's Pride issue, said that a portion of the proceeds will be donated to help suicidal and at-risk teens in the community.

Gallanagh said there will be food, drink, and live entertainment inside the pub, located at 131 Broadway, as well as outside on Second Street. She held a similar block party for St. Patrick's Day that was well attended.

The event for candidate Josh Harder takes place Sunday, September 9, from 11 a.m. to 1 p.m. at a private residence in Noe Valley.

Harder is running against Congressman Jeff Denham, who activists said votes 98 percent of the time in support of President Donald Trump. The 10th Congressional District includes Modesto, Tracy, Turlock, and Manteca and has been identified as one of the five most likely districts in the state to flip from red to blue in the November election.

To RSVP and make a donation to Harder's campaign, visit https://www.eventbrite.com/e/meet-congressional-candidate-josh-harder-in-noe-valley-tickets-48721450169. The address will be provided to those who register.