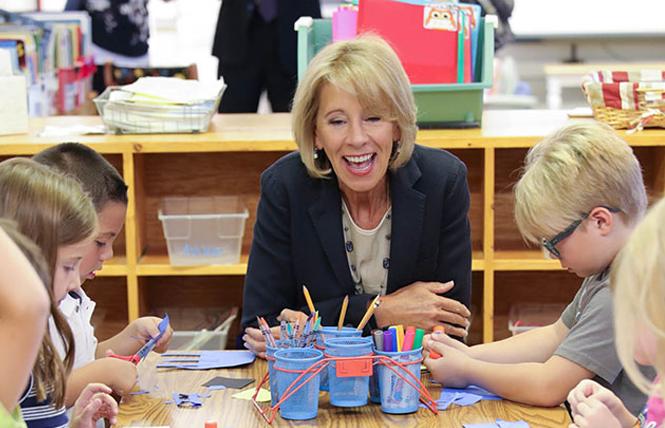 Education Secretary Betsy DeVos toured a Wyoming school last fall as part of her "rethink school" tour; this year, she has denied at least five complaints by transgender students who have faced unlawful discrimination and harassment in public schools.

San Francisco Mayor London Breed has already made appointments to the Board of Supervisors (Vallie Brown in District 5) and City College Board of Trustees (Ivy Lee). Now, she can choose to fill the vacancy on the San Francisco school board when President Hydra Mendoza-McDonnell steps down next month. Since the deadline to file for November's election - when three seats, including Mendoza's will be up - whomever the mayor selects would, in effect, be a placeholder trustee for about three months. Public education is an important issue that behooves Breed to make an appointment.

Voters will get to fill three vacant seats to the seven-member board in November. Mendoza-McDonnell had already announced in June that she would not seek re-election. Another trustee, Shamann Walton, is running for supervisor in District 10. The third seat is held by Trustee Emily Murase, Ph.D., who will not be on the ballot because she missed the deadline to submit her re-election paperwork.

For the temporary school board member, we urge Breed to appoint an LGBT parent, who can bring a necessary perspective to address the problems kids face in schools, whether or not they have LGBT students. Public schools must continuously root out bullying and harassment in order to foster a safer learning environment for all students. The popularity of gay-straight alliances over the last 15 years, and the earlier ages that kids come out, means that most students now know someone who is LGBT, but that doesn't mean everyone gets along or is safe.

Sometimes threats to students can escalate. Last week, in Oklahoma, a 12-year-old transgender girl was mercilessly bullied online, not from her fellow students, but from adults, some of whom may have been students' parents. They called her "It," and "Thing," and threatened physical violence. They urged her peers to beat her up at school. All because she used a girl's bathroom. The school closed for two days for security reasons.

While it's unlikely similar violent reaction would occur in San Francisco, understanding the needs and issues of trans students in particular is critical for school board members. Equality California issued a sharply worded letter to President Donald Trump's education secretary, Betsy DeVos, after Politico reported last weekend that she decided to dismiss at least five complaints of civil rights violations filed by trans students who have faced unlawful discrimination and harassment in public schools. Even as DeVos continues to reference "all children" in remarks at various events, it is clear she does not mean it. "When you say, 'every child,' you really mean 'every child whose gender matches the sex they were assigned at birth,'" EQCA Executive Director Rick Zbur wrote.

As for Breed's appointment, there are a couple of LGBT parents who are among the 19 qualified candidates for the November election. Or Breed could choose someone who's not running for election. The point is that with only one LGBT member currently on the school board, the community remains underrepresented, even as statistics show that LGB and trans students disproportionately experience bullying, depression, and high rates of suicide.

Despite strong laws in California that protect the rights of LGBT students, it will take more than laws to change students' behavior. Having a full school board is crucial in the first few months of the school year so that district officials can implement board policies and ensure that all students have a safe learning environment.

Teaching LGBT history
The new school year started this week in many Bay Area districts, but one thing most students won't see are the new textbooks that include lessons on LGBT history. As we report this week, many districts have not purchased any of the books that were approved last year by the California Department of Education. The reasons are varied and include parental pushback, teacher concerns, budget constraints and lengthy review processes for selecting new educational materials. Thankfully, that does not mean students won't learn about LGBT history. In San Francisco, for example, the school district has a wide selection of instructional materials that it has generated on its own. District officials have worked for several years to develop the curricula, and the lesson plans are in alignment with the state's revised framework for history and social science. In Oakland, where the school district is facing a multi-million dollar deficit, officials have purchased about $1 million worth of textbooks, workbooks, and other materials.

Both of these developments are good news for Bay Area students, but more needs to be done. Bay Area school board members need to prioritize purchasing the LGBT-inclusive textbooks in their next budgets, so that they can get into the hands of students in the next few years. Organizations like Our Family Coalition are also working with educators and parents to reduce barriers to the books, such as opposition from some parents.

In our polarized society, school district leaders must take the initiative. That may be in the form of educational meetings, or presentations from LGBT-inclusive groups so that any concerns can be addressed.

LGBT leaders have worked for years to reach this point. Now, the burden shifts to school districts, which must ensure that their materials are in compliance with the Fair, Accurate, Inclusive, and Respectful Education Act, authored by gay former state Senator Mark Leno (D-San Francisco), which requires that school districts teach students about LGBT individuals and people with disabilities.