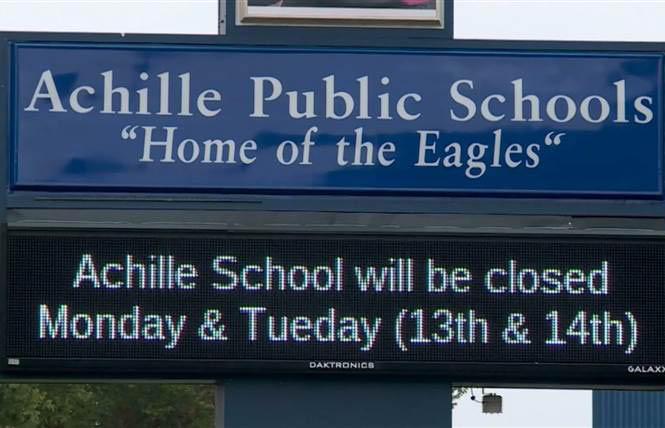 An Oklahoma transgender girl who faced a torrent of online threats from parents plans to move to Texas, the Dallas Morning News reported this week.

The 12-year-old girl, identified only as Maddie, was repeatedly threatened online after she used the girl's restroom at her new middle school.

"Closing for those two days had little to do with our school, but more about the adult community. The thought was that one adult group was gathering and that possibly an opposing adult group might show up also," Beene wrote in an email to the B.A.R. "Our kids/students at school never had a problem and hasn't since we came back. The problems were created online and mainly by adults that do not live in our school district."

In related news, a pilot was suspended Sunday from his job at Frontier Airlines for his alleged involvement in the cyberbullying. According to reports, he urged Maddie's classmates to beat her up at school.

Last week, Beene told CNN that two district parents complained about the girl's use of the bathroom that matched her gender identity in a private Facebook group called "Achille ISD Parents Group," which Beene said is not officially affiliated with the school.

According to the local station KXII Fox News 12, the comments included physical violence, one of which detailed the use of a knife against the child. One post said it was hunting season for transgender people. The parents also referred to the girl as "it" and "thing."

"The law enforcement thought it would be easier to not have to worry about the protection of our 360 kids," Beene told the B.A.R.

LGBT groups have come out against the attacks. New York LGBT Network President and Chief Executive Officer David Kilmnick has condemned the threats and has asked that the school system implement mandatory LGBT cultural sensitivity training.

"We have a long way to go until all LGBT youth can feel safe in their schools and communities," Kilmnick said. "Bullying against any student is wrong and should be dealt with swiftly. And when the bullying is coming from parents, a community-wide response led by school officials and local elected officials is necessary to protect and ensure all students are safe. It is the duty of all officials to create this safe environment and anything short of that should result in termination."

Frontier Airlines told the Associated Press it has suspended a pilot who is allegedly one of the parents who made threats. A spokesman for the airline said the pilot was suspended August 13 pending an investigation into the alleged threats.

The Dallas paper reported that Maddie's mother, Brandy Rose, will use money generated from a supportive GoFundMe campaign to move to a larger city in Texas that has more resources for trans students. Rose also filed a protective order against one of the parents, the paper reported.