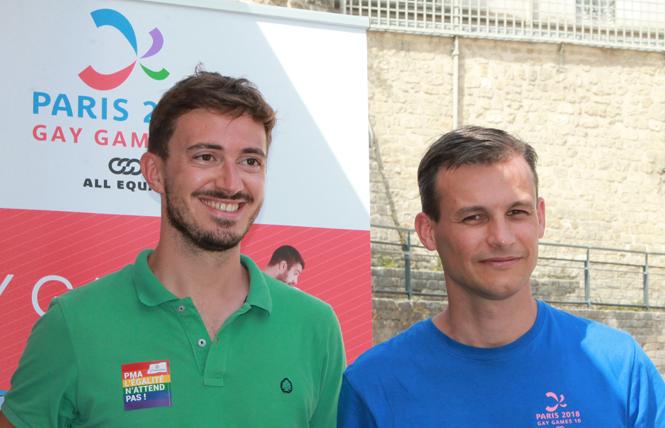 Sitting in the stone stands of the more than 2,000-year-old Gallo-Roman stadium in the center of Paris, Potier talked and watched as Joel Deumier's team qualified for the next level of the sport. Deumier is the president of SOS Homophobie, a French LGBT support organization.

Potier, 38, is a straight ally who is married with two young children. He competed in the 10-kilometer run in the Gay Games in Paris August 6. He finished in the middle of the runners, at around number 300, he said.

Following the race, France's minister of sports, Laura Flessel-Colovic, an Olympic fencing champion, presented the medals to the winners and interacted with the runners, Potier said.

"I'm really, really proud and happy to help this event because it helps us to change the image of homosexuality in France," said Potier, whose office was the leading government sponsor of Gay Games X. "It provides another good image of my country, the image of tolerance, respect, and fraternity."

Potier, a career civil servant, officially took on LGBT issues in May 2017.

Prior to his appointment, he worked on international issues as a specialist for France's overseas territories before returning to the country. In France, he has worked on domestic issues, serving in both the presidential and prime minister's cabinets and as a member of the national delegation.

Hollande was moved by the 2016 massacre at Pulse, a gay nightclub in Orlando, Florida that left 49 victims and the gunman dead.

France's top politicians decided to build an organization within the French government to combat homophobia and discrimination against LGBT people.

"I'm coming from the administration," he said. "It's very important for the LGBT associations because it's a mark of legitimacy and it's a symbol that the administration [and] the politicians are taking very seriously LGBT matters.

"I'm here to create a public policy, a serious public policy," he added. "[The LGBT community] are very happy that somebody coming from the civil administration would be at the head of the national delegation."

During 2016, his office created a national plan to combat homophobia and discrimination against LGBT people. The plan was published by the end of the year.

That same year, his office supported the first in-depth study of the effect of homophobia in the country's society conducted by SOS Homophobie. The report found an uptick in hate crimes, causing concern. His office is keeping a close eye on the new statistics as the national plan is implemented.

"It's important for us to have these facts and numbers and it's important to us to analyze it," said Potier, noting that in 2018 his office gathered 1,000 inquiries, the same as the previous year, and found a slight increase in hate crimes against LGBT people.

"You go to the north of France, it's not so easy," he said. "You have a lot of prejudice and cliché, so we have to fight LGBT phobia in the places where it is quite strong."

"French society is not as open as we can expect or as the image that we have in the world," he told the B.A.R. after the game. "This means that we have [much] work to do to really eradicate the phenomenon."

"It's really a matter of education. We have to educate prevent[ion] at school from the youngest age to really prevent, because we are not homophobic by nature," he said, stating that people are homophobic by culture, history, and living in a heteronormative society. "So, we have to deconstruct those clichés on homosexuality."

Nicolas Pirat-Delbrayelle, 56, is a gay man and co-founder of the Pride Network at BNP Paribas, where he is a project director.

"Unfortunately, there will always be a problem with homophobia all around the world and [in] France, because homophobia is not a movement, it's just a personal attitude," he said. "We can just educate it to say it is not good, LGBT is not a choice, it's just a difference and a difference is not a disease."

BNP Paribas was one of the major corporate sponsors of Gay Games X.

Additionally, Potier's office funded a study conducted by the Fondation Jean-Jaurès, a think tank associated with the socialist party. It revealed that 53 percent of French LGBT people had experienced aggression or discrimination due to being gay at least once in their lifetime.

"This number is quite impressive for us," said Potier. "That's why we still fight LGBT phobia everywhere. That is why we are not at the end of this battle."

France's plan against homophobia
Potier's office began to implement its plan in 2017, utilizing 1.5 million euros earmarked for LGBT rights "to build a real public policy to fight homophobia," he said.

The plan covers special events, such as the Gay Games; LGBT sensitivity programs; and marketing and advertising campaigns. Last year, his office financed around 150 actions working with LGBT organizations, community groups, schools, and other government departments within France, particularly in communities where homophobia is strong.

At the same time his office is ramping up combating homophobia throughout France. It's supporting the next controversial issue: a law around medical procreation for women, or what is known in the U.S. as reproductive technologies.

The law would also include LGBT couples and individuals.

Potier pointed out that, when same-sex marriage was passed in 2013, there were protests in the streets of Paris. Five years later, "there is no more debate in France about this law," he said.

However, French President Emmanuel Macron doesn't want the same reaction that happened when same-sex marriage was passed, he said.

"We will keep these promises, but it will not be a special law on this subject," said Potier. "It will be passed with another, more global law on ethics recognizing the end of life."

Potier explained that France doesn't operate on identity politics, rather it focuses on the nation and its people as a whole. They are guided by the French philosophy of freedom, or equality in general, when fighting for LGBT rights.

"We have a quite tolerant country, but we are in a country that don't likes communities or groups or political culture," said Potier. "That is why we don't say we defend the LGBT community, we say we defend equality ... it is in the name of equality that we defend medical procreation for women for instance."

Another area of his work that deeply affects a segment of the LGBT community is anti-Semitism, which is on the rise in France and a major problem in the country, he said. Within the past couple of years two women who survived the Holocaust were found murdered because they were Jewish. The women weren't gay, but it alarmed Potier's office. France has a large Jewish LGBT community. His office has been working with France's Jewish LGBT community organizations to combat hate crimes against Jewish people.

Appreciated ally
Deumier believes things are improving for France's LGBT community, thanks to the support of the country's government.

"Things are getting better and better," said Deumier, who noted that in the 1960s and 1970s LGBT people were persecuted by French authorities.

Today, the community is supported by the government, which has passed laws to protect the LGBT community.

"However, we have to go further," Deumier said. "Medical procreation for lesbians is still forbidden. It's open and allowed for straight couples, but it's forbidden for women couples. So, that means there is legal discrimination.

"We cannot hope to eradicate homophobia if we don't get equal rights," he added, noting what's happening in the United States under President Donald Trump's administration.

"I think that this is a very bad signal," said Deumier, referring to the U.S. Supreme Court's recent ruling on the Masterpiece Cakeshop case, where the court found that the Colorado Civil Rights Commission violated a baker's free exercise rights when it ordered that he sell cakes to same-sex couples the same as he sells to heterosexual couples.

"Our goal is that every single person, LGBT person can live and love freely as a person as any other person. That is our goal," he added.