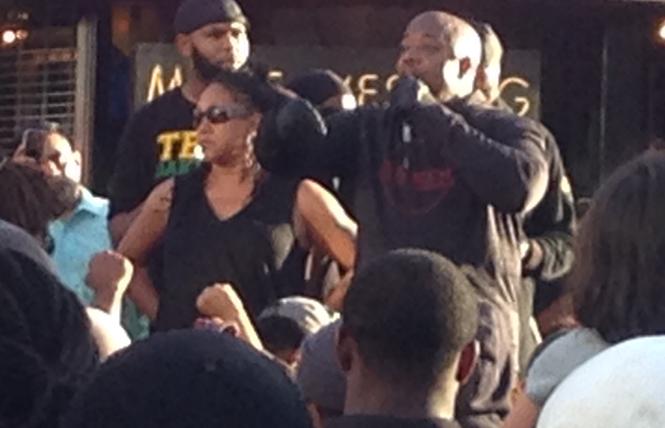 Oakland recently served as an example to the entire country on what intersectionality means in practice by bringing together activists from all over the Bay Area to defend not only a city, but the memory of one of its lost daughters.

The Proud Boys, a white supremacist group founded by Canadian Gavin McInnes, had announced a meet-up for July 23 at Make Westing, a bar at 1741 Telegraph Avenue in Oakland. Normally, when the Proud Boys - whose ignorance, in my personal experience, is matched only by their propensity for mindless violence - schedule these events, they pick a location whose owners either sympathize with their bigoted views or who are willing to tolerate them so long as they pay. In contrast, Make Westing not only didn't want them there, but also reached out to the community for assistance in defending the bar to ensure the Proud Boys couldn't enter.

Then, on Sunday, July 22, the situation changed completely. A white man allegedly murdered Nia Wilson, an 18-year-old from Oakland, while she was standing on the platform at the MacArthur BART station, and slashed the neck of her 26-year-old sister, Lahtifa Wilson.

Within hours, Oakland activists had planned a vigil for Monday, July 23, at the station - and a march to Make Westing.

"I don't know the motivation [of her killer]," said Oakland mayoral candidate Cat Brooks to a crowd of over 2,000 people outside MacArthur BART. "But I cannot ignore the fact that this happened right before white fascists said they were coming to our town.

"We will continue to fight for our babies," she added.

"We must admit it so that we can fix it," said Kaplan, a white cis woman who has endorsed Brooks for mayor. "Black lives are not as protected as white lives."

While the march to Make Westing was in progress, news broke that BART police had arrested John Lee Cowell, a 27-year-old felon with a documented history of violence, and charged him with Wilson's murder. If BART and the Oakland Police Department thought that would take the steam out of the action, they couldn't have been more wrong.

In short order, several thousand activists - black and white, queer and straight, trans and cis - claimed the ground in front of Make Westing as Brooks and others looked on and declared themselves ready for whatever the Proud Boys would throw at them. Looking at the determination of the crowd, I almost felt sorry for the inbound fascists.

A few minutes later, the cry went up, "There they are!" and I saw about six white men trying to run through our lines. As one, the crowd yelled, "Get the fuck out!" and closed in on them.

All were grinning, but those smiles quickly disappeared when the crowd caught up with them. Suffice it to say that even for a group known for bad ideas, trying to rush Oakland may go down as the worst one the local Proud Boys have ever had.

Rest in power, Cass Alecs Leung
On July 27, the activist community lost a vibrant voice as Cass Alecs Leung was taken from us far too soon. She was one of the first to go out into the streets in San Francisco against the Trump regime after the debacle of the November 2016 election and was a strong comrade at every action I saw her at. In addition to her anti-fascist work, Leung was a leader in the leather and trans communities and will be sorely missed by many. Deepest condolences to her loved ones and may she rest in power.

U.S. meddling in Central America
At 7 p.m. Friday, August 10, at 2969 Mission Street, the Party for Socialism and Liberation will host a discussion on "U.S. Meddling in Latin American Elections." Suggested donation is a sliding scale of $3-$10, with no one turned away for lack of funds. The space is wheelchair accessible and refreshments will be provided.

'Hot Witches Melt ICE'
At 9:30 p.m. Saturday, August 18, at the new Elbo Room Jack London at 311 Broadway in Oakland, Starr Noir and a group of other DJs and visual artists will host "Hot Witches Melt ICE." Admission is $10, and the event is a benefit for the Southern Poverty Law Center.

Gays Against Guns takes on FedEx
At 5 p.m. Sunday, August 26, at the FedEx location at 726 Market Street, Gays Against Guns will conduct an action to protest FedEx's continued collaboration with the National Rifle Association. In contrast to several other companies like Delta Air Lines and Enterprise Holdings (which also owns Alamo and National Car Rental as well as its own Enterprise rental brand) that terminated their discounts for NRA members following the massacre at Marjory Stoneman Douglas High School in February, FedEx continues to offer discounts to NRA members who use its service to ship firearms.

Action alert for Oakland sex workers
Two spirit Oakland City Councilmember Abel Guillén has introduced a proposed ordinance that would empower the Oakland Police Department to tow the vehicles of cars driven by those the police suspect are trying to employ sex workers. In response, the US PROStitutes Collective has issued an action alert asking sex workers and their supporters to oppose the measure, which they contend will only make conditions more dangerous for those engaged in street-based sex work. The ordinance, 18-0781, is currently on the agenda for the September 11 meeting of the council's public safety committee.

Thanks to the decision by federal law enforcement to shut down and prosecute Backpage.com earlier this year, I (and, I suspect, other criminal defense attorneys) have seen an uptick in street busts of alleged johns by local law enforcement. Previously, those agencies preferred to do stings on Backpage.com (where undercover officers placed fake profiles), presumably because it was easier to control the takedown, as the client would be lured to a hotel room and detained upon entry, at which point the police would text or call the client's phone to verify it was them.

To their credit, in my professional experience the Alameda County District Attorney's office has been reasonable in resolving the cases of first offenders who are arrested in this way, but allowing OPD to impound vehicles is likely to disproportionally impact the working poor. Getting a car out of police impound can cost hundreds of dollars (if not more) that defendants often don't have and - if the defendant is sharing a car with their family - can prevent their spouse and children from being able to get to work or to school.

Decriminalization, as sex worker advocates have long pointed out, would solve a lot of these problems, as well as creating a situation where sex workers could report actual instances of child exploitation and human trafficking to the authorities without putting themselves at risk, as is the case currently. Sadly, until politicians and voters look behind scare headlines about human trafficking and talk to those affected, we're likely to see more bills like Guillén's.

Guillén's office did not respond to a request for comment on the proposal.