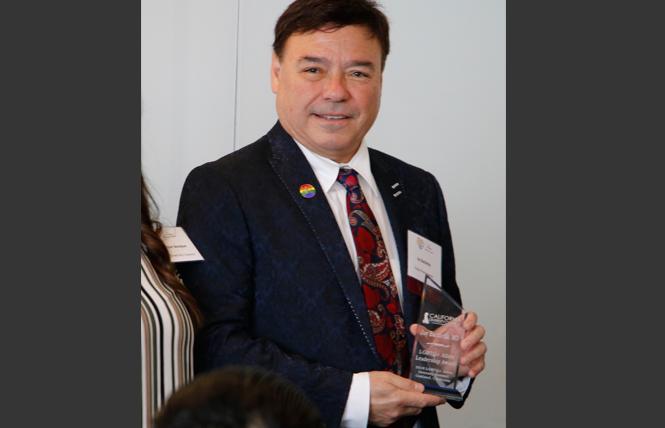 A gay Union City Kaiser Permanente physician has been awarded the LGBTQ Leadership Award by the California chapter of the National Diversity Council for his longtime advocacy work.

Dr. Jay Bachicha, an OB-GYN, received the award June 20 at the inaugural LGBTQ-plus Allies Diversity Summit in Oakland for "his work in the community, as a physician and in his role as national co-chair of KP Pride, Kaiser Permanente's business resource group that represents Kaiser's LGBTQ staff members," according to the council.

In a telephone interview with the Bay Area Reporter, Bachicha talked about his advocacy work at Kaiser.

Bachicha, who declined to give his age ("You can say I'm ageless," he quipped), said that despite recent victories, "there are still lots of barriers for many people to be accepted at work and at home as their authentic and true selves."

In addition to his advocacy work at Kaiser Permanente, Bachicha has also served as a board member for the National Board of Medical Examiners, the organization that writes the examinations that all physicians in the U.S. and Canada must pass in order to be licensed.

Bachicha said his work on medical missions to Ghana, Ethiopia, Nicaragua, the Philippines, Haiti, and Panama was also cited in the recent award.

In a video about Bachicha, Gloria Wilson, a practice specialist for Kaiser's northern California region, talked about his work.

"I nominated Jay for this award because he brings attention and awareness to the LGBTQ community," Wilson said. "He also encourages others to support full equality and acceptance."

"Jay is a tremendous leader," he said.

Before joining Kaiser, Bachicha held a faculty position at Northwestern University in Chicago, where he helped to open several primary medical care clinics, including one in a public housing development.

Within Kaiser, Bachicha served as co-chair of KP Pride Northern California, an employee group, in 2017 and 2018. This year, he was named a national co-chair of KP Pride, one of Kaiser Permanente's multicultural business resource groups, which represents all LGBT employees nationally.

Of all the activities of KP Pride, Bachicha said he was "most proud" of Kaiser's decision to file a "friend of the court" brief in the case of Gavin Grimm, a transgender former high school student in Virginia who sued his school district after it refused to allow him to use the boy's restroom while he was a student.

Grimm has since graduated from high school and is now living in Berkeley. The court case is still in limbo - the American Civil Liberties Union, which is representing Grimm, is waiting to hear from the 4th U.S. Circuit Court of Appeals whether it will hear the case.

Although he was born and raised in a small town in Wyoming, Bachicha said that "coming out was never an issue," for him.

"It would be more accurate to say I was never in," he said. "There was never a moment when I decided to let everyone know I was gay. Fortunately, I felt very accepted" while growing up.

The job offer to join Kaiser in northern California was "a great opportunity" for him to work at an organization that shared his values.

"It filled a spot for me that academic medicine did not," he said.

Kaiser, he said, "is very supportive and very inclusive of various underserved populations."

Management at Kaiser has been proactive in helping minorities to access care in the health care system, he said. Gays and lesbians looking for an LGBT provider can get assistance from staff in member services to find a doctor whose background meets their needs, he said.

Currently, the hospital system is reviewing a proposal that would make it even easier for members and potential members to identify physicians who are LGBT or allies who have an interest in serving LGBT members, he said.

"We're working toward making the system more seamless," he explained.

"Kaiser is very supportive of the LGBT community, which has been recognized by the Human Rights Campaign for a number of years," he said, referring to the national LGBT organization. "We're always a very visible part of gay Pride. Not just in San Francisco and in Oakland, but also in Sonoma, Santa Cruz, and Silicon Valley."

Bachicha said Kaiser's support for LGBT people includes a scholarship program the hospital sponsors, in collaboration with a number of other local corporations, providing funds for high school, nursing school, and medical school students who have served the LGBT community.

"The winners have been some very amazing people," he said.