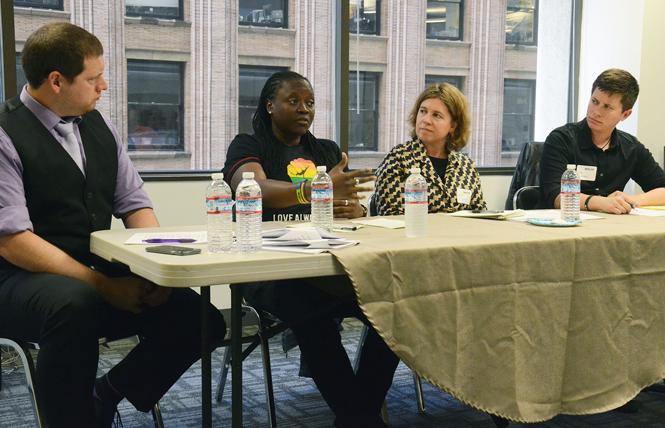 Legal experts believe that if the LGBT movement continues to pit itself against the religious right in an "us versus them" scenario, the gays will lose unless the debate is reframed with religion in mind.

The incident happened before same-sex marriage was legal in Colorado.

At a panel discussion at the Legal Aid at Work offices in San Francisco July 23, Gill was joined by lesbian activist Ssenfuka Joanita "Biggie" Warry and queer transgender activist Sam Ames to discuss legal battles for LGBT rights in the U.S. as well as the affect the American LGBT movement's wins and losses and the current administration has on LGBT movements around the world.

Warry is executive director of Freedom and Roam Uganda.

Ames is interim executive director of Trans Lifeline. Ames, who is an attorney, is also the founding coordinator for the BornPerfect Campaign to end conversion therapy and is working toward a degree at Harvard Divinity School.

The discussion was moderated by Michael Vargas, a Silicon Valley business and securities lawyer at Rimon P.C.

Gill told the audience that the Supreme Court's decision in the Masterpiece Cakeshop case sent a "very confusing message about the role that religion is going to play" going forward.

The court ruled that the Colorado Civil Rights Commission violated the baker's free exercise rights when it ordered that he sell cakes to same-sex couples the same as he sells to heterosexual couples.

Gill explained to the estimated 30 people who came to the discussion that the justices' decision didn't necessarily ban discrimination of LGBT people, but it didn't give businesses free reign to claim religious beliefs to discriminate either.

"Opponents of LGBT equality are arguing that the Masterpiece Cakeshop decision gives them a license to discriminate based on religion. While it did not do that - and the decision included strong language supporting non-discrimination laws - we will need to continue fighting back against efforts by the Trump administration, Congress, and in the states to use religion to discriminate against LGBT people," Gill clarified in an email to the Bay Area Reporter in a follow up statement.

Gill and Ames told the audience that the Masterpiece Cakeshop case signals a pivotal moment for the LGBT movement in the current political climate, especially with President Donald Trump's nomination of Judge Brett Kavanaugh to replace Kennedy, who retired last month.

They also warned that if the LGBT movement doesn't change the "us versus them" mentality and start working with communities of faith that, "We are going to lose. Religion will win here. We need to change," said Gill.

Ames agreed, adding that lawyers are also important, calling them "our first line of defense."

From Ames and Gill's perspective the radical right has done a bait-and-switch by co-opting progressives' language and refocusing it through a religious lens in their messaging.

"They've taken our rights-based language from us and put it in a religious focus," Ames said, using the example of "religious accommodations."

"That's our language. That is not the language of the religious right," Ames continued, stating, they "shifted the playing field. We are on theirs instead."

However, Ames has faith that the LGBT movement can reclaim the playing field again.

Ames told a story about survivors of conversion therapy who didn't give up their faith despite the harm their family, community, and religious leaders did to them. Ames was surprised to find that the survivors didn't believe that God hated them and that their experience brought them closer to God.

They came out wanting to "reclaim this part of themselves," they came out of their experience "wanting to go to seminary" and becoming religious leaders, Ames said.

Ames and Gill both noted that the battleground LGBT activists might be working on is health care. They told the audience that hospitals are increasingly becoming religiously affiliated. The effect of being under a religious affiliation is denial of reproductive health care for women and sex-reassignment treatment and surgeries for transgender individuals, Gill said.

The path forward
Warry, a Catholic, agreed with Ames that it was important to take back religion from the religious right and the way to do that was to remind people that "God is love," she said.

In Uganda, religion is very important to her and to the community, she said.

"In my struggle, and the struggle of the entire community, it's so important," said Warry, who called religion "spiritual food" for the community.

She told the audience how anti-gay pastor Scott Lively and other American evangelicals made "Uganda misinterpret love."

"They fueled, promoted, and preached hate toward gay people," she said, telling her story about her personal struggle to reconcile her faith and being a lesbian.

She eventually concluded, "God is love. I was born in God's image and remind members of community," of this.

That's how Uganda's LGBT community is fighting the resurgence of anti-gay sentiment and a new push to reintroduce and pass the "jail the gays" bill that is again being fueled by American evangelicals.

She is "preaching love for everyone," regardless of what happens with the pending fight against the potential new bill and other emerging anti-gay laws.

However, she said one piece of the battle is for Americans to work on stopping the religious right at home, so it can't spread its anti-gay agenda abroad.

"Whatever happens in America has a very, very big impact on Africa, most especially Uganda," she told the audience.

Ames and Gill believe LGBT activists can turn the tide, but it's going to take working with religious communities.

"The good news is that we can reframe this debate," Ames said. "If we let them set the agenda 'gay versus God' we lose, and we are not living up to our values."

"Religion will be the roadmap," added Gill, but she noted the reality will change if Kavanaugh becomes the next Supreme Court justice.

Not convinced
Not everyone in the audience was convinced. Some audience members raised concerns from their own personal experiences with religion and questioned the panelists' strategy to enter religious territory.

Najwa Alsheikh, a second-year law student at UC Berkeley, appreciated hearing from Gill about her experience and thoughts of working on the Masterpiece Cakeshop case.

"I think that this is going to have very negative ramifications across our society for many years," she said, speculating if businesses, especially in small towns, begin denying LGBT people service.

However, she was apprehensive about the religious strategy going forward to win current and future legal battles for LGBT rights.

Alsheikh, a lesbian atheist, expressed she appreciated churches like the Unitarian Universalists that are "willing to step up and lead the fight."

"I am a little worried about relying too heavily on religion to win these battles," she said. "I think that we need to really center this in human rights, civil rights and equal rights."

Updated 8/8/18: The article was edited to correct the roles of ACLU attorneys Elizabeth Gill, David Cole, and James Esseks.