Transmissions: Their past, our present 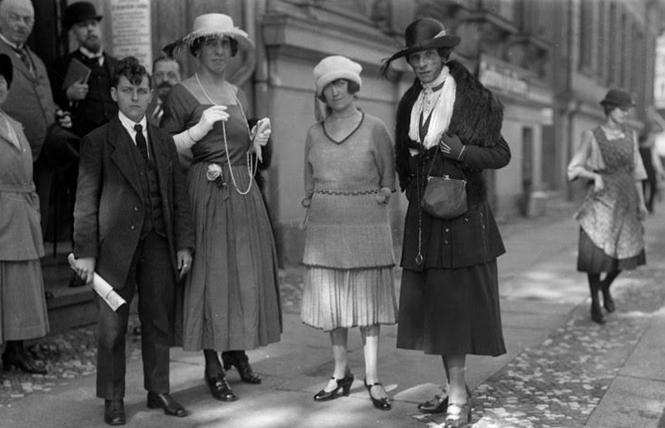 I recently happened upon a photo from 1921. In it, a quartet of people stands outside an imposing stone structure. All four look as if they were in conversation with each other moments before the camera came out, and now they face the lens. One wears an immaculate three-piece suit and tie, while the other three wear fashionable frocks, hats, and heels befitting the time.

Willie Römer took the photo in front of the Institut für Sexualwissenschaft in Berlin, Germany, during the First International Congress for Sex Reform on the Basis of Sexology, pioneered by Magnus Hirschfeld. The four people in the photo are, in modern parlance, transgender.

Hirschfeld was a pioneer in the study of both homosexual and transgender people and his institute was well known. It was a refuge for both, and a place not only of scientific study, but also of community and support. It even led to a lot of great advances in trans rights for the time, including the first modern examples of trans identity documents.

Yet, just 12 short years after this photo was taken, another, more famous one was snapped. In it, a large assembly of Germans, many wearing uniforms of the Nazi party, stand at attention, giving the infamous straight-armed salute. In the foreground, a large pile of books and papers burns.

These books were the remains of the Institut für Sexualwissenschaft. Four days earlier, the staff had been beaten and the windows smashed. Hirschfeld himself was on a speaking tour outside of the country. He never returned and died in exile in France.

Those identity passes that allowed transgender people to exist publicly in Germany, too, were made obsolete.

I've had that first photo sitting on my hard drive. These four people, and their resolute expressions, strike me as they stand along the street. Aside from clothing nearly a century out of date, the people themselves feel oddly contemporary.

After the election of Donald Trump, a mad dash started to get one's paperwork in order. People feared swift changes on the part of the incoming administration. There was a push to quickly correct passports, which allowed an updated gender marker that would be valid for the next few years, hopefully longer than Trump might cling to power.

I was one of those who hurriedly got my papers in order, begging my mother and sister to get notarized letters on my behalf, acquiring the services of a friendly local physician to do the appropriate consultation, and spending a couple months on high alert, wading through the various layers of bureaucracy.

I don't know how many other trans people did the same, but there were enough that massive crowd-funding sources popped up overnight, helping people to get their paperwork in order as quickly as they could.

Yet nothing happened. Passports seemed forgotten, as the administration instead led a fight against our military fitness, in between despicable attacks on immigrants and non-whites. Then, in July, that shaky peace was shattered.

One friend of mine was told that paperwork of hers from 20 years ago would need to be reviewed before she could use her passport, while another friend got a call from the State Department, saying that the letter from her doctor was, seemingly, in error. As of this writing, some 10 trans people have had their passports challenged.

Tucked in between tweets asking for donations and a call supporting transgender health care for veterans, the National Center for Transgender Equality has a notice. It has been investigating the issue and says that all of the challenges so far feature "unusual circumstances" and "bureaucratic mistakes," while reminding the community that the rules haven't changed. I hope that's true.

Nevertheless, people are scared and - to be honest - I'm among them. The president is continuing to attack transgender people, and his whole administration has worked to chip away at our rights little by little. After all, the executive branch isn't just one person, and this one is chock full of those willing to do the bidding of some of the most vile people imaginable.

On top of that, the actions of this administration have emboldened other citizens to revel in their bigotry. In short, the monsters are revealing themselves, as they have no fear of being seen as such.

I look at that photo from 1921, at those proud, resolute transgender people from nearly 100 years ago. How many of them were able to escape what was happening around them, or were they forced into hiding? Were any of them among those beaten when the Institut für Sexualwissenschaft was destroyed? Dare I even ponder if these folks enjoying a nice day in the sun would, just a few years later, be forced to wear the pink triangle and live out their remaining days in a concentration camp?

It would be too easy to think I'm being melodramatic, and that we've come too far to see such horrors revisited. Then I remember that this is an administration that is more than willing to lock young children in cages with nary a flinch, and I feel far less assured.

So now, we need to fight back. In just under 100 days, we need to vote in the midterm elections - and every day we need to be willing to fight back, arm-in-arm, with immigrants, people of color, sex workers, Muslims, and everyone else combatting these same struggles.

I don't want - a century from now - for some future someone to view a photo of the transgender activists of today and have to wonder what happened to our proud faces.

Gwen Smith wishes to spend more days in the sun. You can find her at www.gwensmith.com.