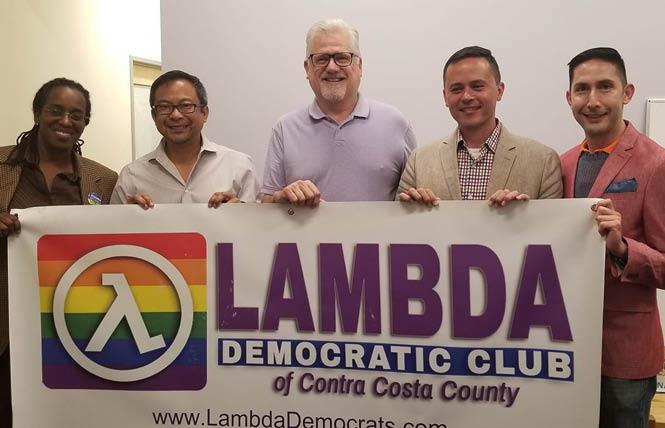 At its meeting last Wednesday, July 25, the Lambda Democratic Club of Contra Costa County threw its support behind the candidacy of lesbian Richmond City Councilwoman Jovanka Beckles, who is running to represent the state's 15th Assembly District. She landed in second place in last month's primary race for the seat, which stretches from Richmond south into parts of Oakland, behind first place finisher Buffy Wicks, a former Obama administration staffer.

Beckles and Wicks are vying to succeed Assemblyman Tony Thurmond (D-Richmond), who is running to be elected state superintendent of public instruction in November. The Lambda Democrats had endorsed lesbian Berkeley school board member in the primary race, but she failed to advance to the general election. This time, Beckles was able to secure the 60 percent vote threshold to secure the club's endorsement.

In December he became the city's first LGBT and first Filipino mayor; the position rotates among the council members. He is also the first known HIV-positive mayor in the region, and only the second out mayor to serve in Contra Costa County.

Three gay political newcomers also picked up early endorsements last week from the Lambda Democrats. Cesar Zepeda, a co-founder of the club and its current president, secured its support for his second campaign for a seat on the Richmond City Council.

In 2016, he lost his bid to become the first out gay man elected to his city's council and only its second LGBT member, after Beckles. A Mexican immigrant, Zepeda has called the East Bay city home since he was 8 years old and is currently a homeowner and neighborhood leader in Richmond's Hilltop district.

Martinez resident John Stevens won the club's endorsement of his second try for a city council seat. He ran two years ago but came up short in his first race for elected office.

Believed to have been the first LGBT CEO of a chamber of commerce in Contra Costa County, having led the Martinez Chamber of Commerce, Stevens would be the first out LGBT member of his city's council.

United States Navy veteran Shawn Kumagai also picked up the club's endorsement of his bid for a seat on the Dublin City Council. Kumagai is a former Lambda Democrats board member and sought its endorsement, despite his running for office in a different county.

An instructional design consultant for PG&E, Kumagai is now a master chief petty officer in the Navy Reserve. It is believed he would be the first known LGBT person elected to the council should he win the race.

Like Kumagai and Zepeda, Stevens was a founding member of the Lambda Democrats and part of the club's first board of directors. Quinto also helped launched the LGBT Democratic political group, and all four remain members.

Beckles picks up additional LGBT support
Should Beckles be elected to the Assembly seat, she would be the first LGBT member of the state Legislature from the East Bay.

She would also be the first out African-American state legislator, as Beckles identifies as a black Latina, and the first LGBT immigrant in the Legislature, as she was born in Panama. She and her wife, Nicole Valentino, have an adult son and have lived in Richmond since 2005.

She recently picked up endorsements from the two other out candidates who had run in the primary: Appel and bisexual East Bay Municipal Utility District board member Andy Katz, who also identifies as gay.

In a statement released by Beckles' campaign, Appel noted that the 15th Assembly District is one of the most progressive in the state, if not the nation, and deserves to have a progressive legislator representing it in the Capitol.

"It is our responsibility, a responsibility that is more critical now than ever before, to send a progressive voice to Sacramento who will fight for California's students, for our working families, for our deeply held commitment to equity. In this race, that person is Jovanka Beckles," stated Appel. "I'm supporting Jovanka because, like me, she is unafraid to stand up to the powerful - whether that means corporate charter school interests, national anti-immigrant activists or oil corporations - so that everyone in our communities, regardless of gender orientation, race, religion, economic circumstance or immigration status must be able to avail themselves of the full rights to which they are entitled."

In announcing his endorsement of Beckles, Katz noted that she "is the leader with proven experience to take on tough fights for working families, from protecting our communities from air pollution and climate change, to advocating civil rights, equality, and healthcare for all. We need Jovanka in the Assembly to address the education inequities and affordable housing challenges facing our East Bay residents."

Several other primary candidates for the Assembly seat are also backing Beckles in the general election: Oakland City Councilman Dan Kalb, El Cerrito Vice Mayor Rochelle Pardue-Okimoto, and activists Cheryl Sudduth-Política and Owen Poindexter. Beckles' campaign noted that the combined vote total in the June primary for her and the other candidates who have now endorsed her was 68,678 votes, by far more than the 37,141 votes that Wicks received.

In announcing the backing of her former rivals for the seat, Beckles thanked them for their support and for sharing in her vision for what she wants to achieve by serving in the state Legislature.

"What seems like insurmountable forces are menacing this future: multinational fossil fuel companies poisoning the Earth and corporate interests privatizing our schools," stated Beckles. "But as the African proverb says, 'when spider webs unite, they can tie down a lion.' When we, the people of the East Bay come together, we can hold back the corporations preying on our future."

The East Bay Stonewall LGBT Democratic Club, which is focused on Alameda County, has yet to hold its endorsement vote for the fall Assembly race. Like the Lambda Democrats, the Stonewall club was unable to coalesce around one of the candidates in the primary race.

John Bauters, chair of Stonewall's political action committee, had told the Bay Area Reporter that the club was likely to send both Beckles and Wicks new questionnaires to fill out in order "to get us some new information."

According to the club's website, it will consider endorsements for LGBTQ+ incumbents running on the fall ballot at its meeting August 15. It will then vote on all other candidates, regardless of sexual orientation, seeking its endorsement at its meeting September 13.

It is conceivable that Wicks could secure Stonewall's endorsement in the general election. Club members like Bauters, a gay man on the Emeryville City Council who is currently serving as mayor, and Quinto have already personally endorsed Wicks, who has a gay brother. Gay former Berkeley city councilman Darryl Moore is also supporting her candidacy.

"The mayors of these cities make the toughest decisions every day - tackling the housing affordability crisis, finding compassionate solutions to homelessness, ensuring public safety, and standing up against President Trump's dangerous agenda," stated Wicks. "That's why I couldn't be more honored to have the support from so many of our district's mayors."