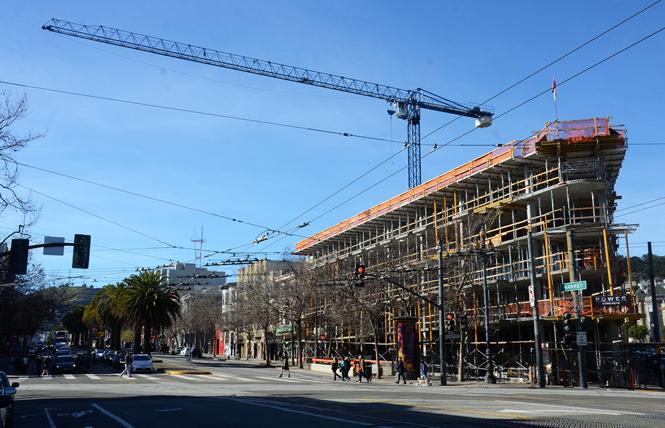 Construction continues on housing at the intersection of Church, Market and 14th streets. Photo: Rick Gerharter

As developers prepare to break ground on several new housing developments along upper Market Street, the addition of more ground-floor retail spaces along the commercial corridor in the city's gay Castro district is adding to neighborhood concerns about how to attract new businesses to fill the storefronts.

Due to a variety of factors, from changing demographics and consumer behavior to rising rents and costs to do business in San Francisco, there is a glut of vacant commercial spaces along Market Street between Octavia Boulevard and Castro Street. While more than a dozen businesses this year have either moved in, expanded into, or announced plans to soon open in the area, other longtime retailers have shuttered their doors.

Now three new developments will be adding additional retail space to the corridor in the coming years. Having won approval from planning officials two years ago for its project at 2240 Market Street, the former Sullivan's Funeral Home site, the Prado Group Inc. expects to soon start construction. It will repurpose the existing building and adjacent parking lot to create 45 condos for sale above several ground-floor retail spaces.

"Currently, this project is scheduled to break ground later this summer or in early fall," Cindy Park, Prado's senior vice president of marketing, strategy and operations, recently told the Bay Area Reporter in response to questions about the status of the project.

Another condo development, featuring 96 units, 14 of which will be below-market-rate, is slated for 1965 Market Street and 255-291 Duboce Avenue, currently the site of a surface parking lot and a commercial building with several tenants, one of which is a FedEx Office Print and Ship Center.

It won approval from planning officials earlier this year. The plans call for retaining the approximately 3,760 square feet of existing ground floor retail.

The developer, David Prowler, of Keller Grover Properties, LLC, told the B.A.R. this month that, at this point, there is "nothing to report on groundbreaking, but it is moving ahead."

A third project, at the corner of Church and Market streets, is currently under construction at the intersection of Market, Church, and 14th streets. It topped out several weeks ago and is slated to welcome residents in early 2019.

It is the second mixed-use development on upper Market Street being constructed by local developer Brian Spiers, who owns the nearby bar Lucky 13 and built the cube-like Linea development a block north on Market that opened in 2014. It was a challenge to lease out that building's three ground-floor spaces, with a nearly 400 square foot space still sitting vacant.

Spiers told the B.A.R. this month that he has yet to sign leases for the new building's retail spaces.

"Retail, obviously, is challenging right now," he said. "I've had some inquiries but no real discussions." 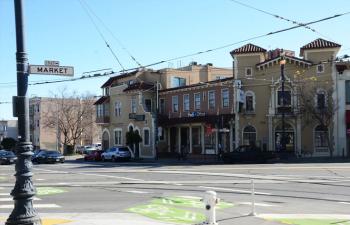 This building at Market and Duboce and the adjoining parking lot are slated for a housing project. Photo: Rick Gerharter

Retail strategy
After an initial burst of new mixed-used developments were constructed along upper Market Street, several of which struggled to fill their commercial spaces similar to Spiers' Linea building, neighborhood groups, a few years ago, came together to create a retail strategy to help attract merchants to the Castro. The effort, which is ongoing, has had some success and helped focus attention on the retail concerns in the gayborhood.

But it has not been a cure-all, and in recent months conversations have begun on what zoning changes may be needed for the corridor to make it easier to fill the vacant storefronts. In years past, unease among residents and storeowners at seeing chain stores flood into the area, driving up rents and local retailers out of business, led to restrictions making it harder for national and regional brands to open along upper Market Street.

Now, some have suggested it may make sense to loosen those restrictions. Others have floated the idea of making it easier for nonprofits and local arts groups that provide services or programs to the public to rent out ground-floor spaces.

"I think people have been very receptive to the developments for bringing some minor relief in terms of housing. The concern for most residents has been, what are we going to do with the commercial spaces," said Mark McHale, a real estate agent who has lived in the Castro for nearly three decades and is currently the president of its neighborhood association.

Spiers said he has had mixed reactions from residents to his Linea building, which, like his current project under construction, was designed by the firm Arquitectonica.

"I still get both positive and some very negative feedback. It is very subjective architecture," he said. "I am really optimistic about the building I am currently building at the corner of 14th and Church. It is a really great example of a modern flat-iron building."

Based on his experience trying to fill his projects' retail spaces, Spiers told the B.A.R. he believes some changes are needed to what kinds of businesses the city will allow to move into the storefronts. He also is an advocate for allowing more housing units to be built at the ground level, something he had proposed to do in his new building along the 14th Street side but was instructed to turn into retail space by the city's planning commission. 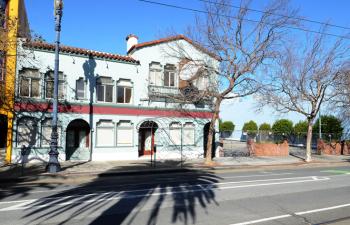 "With the changing dynamics of retail - people are getting their retail via Amazon or online - it is just not the same environment for shopping as it was. So if we are going to require ground-floor retail and try to activate it, we have to be open to more uses," said Spiers. "We have seen how restaurants come and go, they have their own challenges on how to make it work in San Francisco. Other than a restaurant, what can go in there?"

Over a decade ago, Bevan Dufty, when he was the neighborhood's supervisor, led an effort to plan for what residents wanted to see in the design of the dozen buildings being proposed for vacant lots and former gas stations along upper Market Street. With half of the projects now built, Dufty recently told the B.A.R. that he has mixed feelings about their impact.

"From an architectural standpoint, I think they are interesting and adding to the character of the neighborhood," said Dufty. "I don't think the retail has been as vibrant. We need more vibrancy in the neighborhood."

During the middle of most weekdays in the Castro, Dufty said, one could roll a bowling ball down the sidewalk due to the lack of people in the area.

"The businesses need to be busy," said Dufty. "It is why I supported Rafael. I know he is going to put a plan together."

Dufty was referring to Rafael Mandelman, who was sworn in this month as the new District 8 supervisor. During the campaign for the board seat, Mandelman made retail vacancies a key issue and organized a meeting earlier this year between neighborhood leaders and one property owner, Veritas, to discuss how it intended to attract retailers to the various buildings it owns near the intersection of Market and Church streets.

During an interview in late June, Mandelman told the B.A.R. that he plans to prioritize the issue and had brought it up with the city's new mayor, London Breed, when they met last month following their victories in the June 5 primary election.

"We talked about really focusing on upper Market Street and the vacant storefronts and giving that neighborhood the attention it needs to receive," he said. "She is really committed to that."