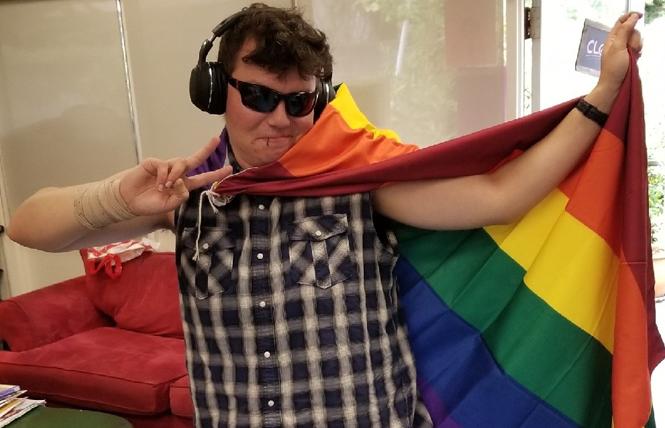 The death of Daine Grey, a 22-year-old trans man and student at City College of San Francisco who died by suicide July 2, has sparked concern among some students about a transphobic and homophobic culture at the school.

A GoFundMe account has also been set up - and has raised over $25,800 - for Grey's funeral arrangements after his body reportedly went unclaimed by his estranged family for more than 10 days.

According to an update on the site, Grey's funeral will be held Thursday (July 26) in Oakland.

A close friend of Grey's, who goes by the name of Lady Katerina, set up the GoFundMe account for Grey and said he and other LGBT students at City College have faced bullying by other students. Lady Katerina, 36, is a lab technician at the Queer Resource Center at the college's Ocean Campus where Grey was an active participant.

The Queer Resource Center was a "home" to Grey, Lady Katerina said, and she feels its closing during the summer semester, something the college's queer community has fought against for years, was upsetting to Grey.

"Daine is the symptom of a broken system. The college failed him," said Lady Katerina, who identifies as pansexual, intersex, and two spirit. "QRC was his safe space, his home, his life, where he was able to be himself.

"When you're trying to deal with life and then have an essential part of your everyday ripped from you, it's very debilitating," Lady Katerina added.

Connie Chan, a spokeswoman for City College, confirmed that the resource center was closed for the 2018 summer semester, but could not confirm if it had been closed during previous summers or the reason for its closing.

"The new administration is working closely with students to advocate for more resources," Chan said.

A July 17 Facebook post on the college's page offered condolences regarding Grey's death and also noted the resource center was open for a few hours a day from July 9-20 to offer counseling and other services to students.

It is unclear what pronouns Grey preferred. Lady Katerina said he preferred "he/him/his," while the City College post used "they."

"It is with heavy hearts we share the news that a member of our student community, Daine Grey, took their own life in early July. Daine was a promising young student who was a gay trans man active with the City College of San Francisco Queer Resource Center, and who advocated for awareness of ADA needs," the post read.

Changes for trans students
In February, the college implemented a chosen name policy, in which transgender students are able to have their preferred names appear on class rosters, emails, online courses, and, in the future, student ID cards, though Lady Katerina said the policy came later than it should have.

"We're trying to fight homophobia and transphobia that goes on at City College," she said. "Bullying of trans and LGBTQ students goes on by other students all the time."

Rafael Mandelman, a gay man who's a former member of the college's board of trustees and newly elected District 8 supervisor, said he did not receive any formal complaints from or about Grey's bullying. Though he did say the college is among many institutions across the nation that needs to improve its policies around transgender people.

"A lot of educational institutions are working to get themselves into the 21st century around issues of gender identity, and City College is no different," Mandelman said. "It has made significant strides but still has a lot to do."

However, after media outlets started to contact the family, Lady Katerina said they started to change their tune.

"[Grey] was disowned from his family," said Lady Katerina. "They wanted nothing to do with him. Now, the family is saying different things after being contacted by the press."

"Daine's mother and grandma met with me Friday and we planned the funeral, paid for the burial, and everything," Lady Katerina posted on the GoFundMe site.

If there is any additional money after the funeral expenses for Grey, it will go to the Queer Resource Center to help provide education and outreach for students and faculty around queer and trans needs, Lady Katerina said.

Gray, originally from Livermore, California, started at City College in August 2017, according to his Facebook page. On his Facebook page, a post remains in which he publicly came out as a gay, transgender man about 10 months ago.

"Hello guys, guess this is my big 'public' Coming Out moment: if we talk in person at all you probably already know, tbh. So ... I'm transgender (hence the name/gender change - which is already legal btw). This means I identify as a gender different from the sex I was assigned at birth, for those who don't know. I'm also gay so, that's a thing."

The post continues, "I've been taking hormones for around eight months now, so I've already changed a lot, for those I haven't seen in a long time. Hope this doesn't lose me too many friends and family."

Grey's parents did not respond to requests for comment from the Bay Area Reporter, but his mother did speak with NBC Bay Area. Haught is estranged from Grey's father, Peter Haught, according to the station. Haught told NBC she hadn't talked to her son since he was 16 and only found out he was transgender through Facebook days before he died.

She claimed Grey's father told her he would claim their son's body. Peter Haught declined to provide NBC Bay Area with an on-the-record comment.

Chapel of the Chimes is located at 4499 Piedmont Avenue in Oakland. Doors open at 10:45 a.m., the service starts at noon and is open to the public.

If you or someone you know needs help, contact the National Suicide Prevention Lifeline at 1-800-273-8255. Support is free and confidential.