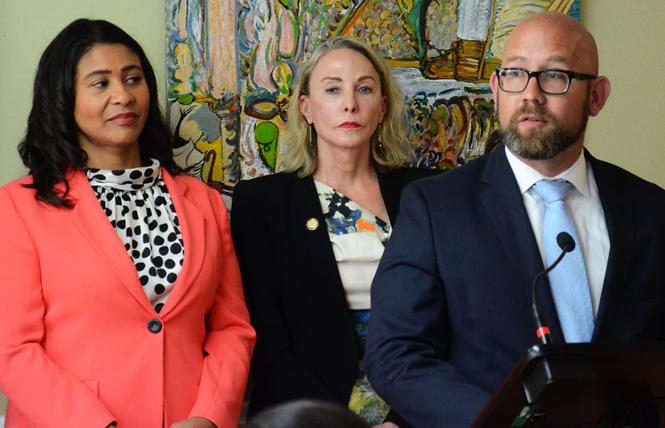 "To address homelessness we have to make sure we invest in preventing homelessness in the first place," Breed said. "This additional funding is a down payment for our commitment to ensure these providers can care for and serve our community."

The proposed budget amendment will provide funding to 37 care facilities and keep over 350 people housed and cared for, Breed said. Over the next two years, $600,000 will be given to nine high-intensity care providers in the city, and an additional $400,000 will be allocated to increase operating support for 28 other basic-level care providers.

The funding will provide a specific amount of money per bed, per care home to ensure that each patient's needs are properly met. The money will also, eventually, lead to an increase in wages for staff and employees of the care homes, Garcia said at the news conference.

Breed said in San Francisco, and throughout California, these facilities are under financial strain by a lack of state and federal funding. DPH already invests approximately $2.5 million annually to close the gap in the cost of services of the homes, according to Garcia.

"We need to figure out ways in which we can continue to support the great work these facilities are doing," Breed said. "This is a complex issue that requires a holistic approach. City resources need to be used in the most efficient way to support the community."

Cohen said this investment is "directly aligned" with the Board of Supervisors' budget priorities and continued commitment to helping solve homelessness. She also noted that the board has allocated over $4 million in this year's budget to housing and homeless solutions, including housing subsidies for families and seniors, mental health services and street medical teams, and housing improvements for veterans, among other solutions.

Mandelman said that when California began the path of deinstitutionalization and closing its state mental health hospitals decades ago, the promise of increasing community residential care homes was not kept. He spoke about the impact residential care homes have on vulnerable communities, which have historically faced homelessness and the importance of maintaining the current operating care homes.

"As we work to move the thousands of currently un-housed homeless San Franciscans off the streets and into care, it's critical we stabilize our existing stock of board and care facilities," said Mandelman, whose late mother suffered from mental illness.

In the audience, Mary O'Reilly, 71, a resident of Victorian Manor, said she believes Breed has the right attitude and is making a smart choice in revitalizing the care facilities.

"This is where I live," she told the Bay Area Reporter. "In San Francisco, these homes are steady housing for those in need."

The mayor's proposed amendment was presented at Tuesday's board meeting, where the supervisors were scheduled to have a first reading of the budget.