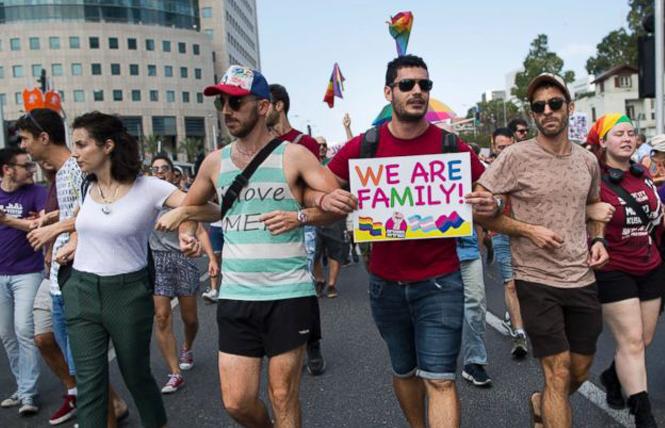 Thousands of LGBT Israelis and supporters took to the streets July 22 for a one-day strike called by queer movement leaders to protest a new surrogacy law that excludes LGBT people and single men.

Israel's Parliament, the Knesset, passed a new amendment July 18 allowing single women and women who are unable to become pregnant for medical reasons to utilize state support for surrogacy, but excluded LGBT people and single men.

The law, which was supposed to include LGBT people and single men, outraged the community, prompting protests that filled the streets and Rabin Square and blocked freeways in Tel Aviv.

"We will not remain silent," chanted Eyal Lurie Pardes, a protester draped in a rainbow flag, reported ABC News. "Look me in the eyes and tell me I don't deserve to be a father."

He was later seen on Israeli TV being pushed into a police car. Two people were arrested at the protest and later released.

Netanyahu previously supported the bill including LGBT and single men, but he was deterred by conservative Jews, allowing the bill to pass without those additions.

"It's a really disappointing outcome, but not entirely unexpected," said Ty Gregory, executive director of A Wider Bridge, a New York-based LGBT Jewish organization that promotes support for Israel and its LGBT community.

"We are even more disappointed that he verbally expressed support for including gay men in the bill and then didn't do that," he continued. "That was something that really upset the LGBT community and led to a lot of energized activity that you saw over the weekend."

The organization launched a Change.org petition to gather global support for the strike.

Broken promises
The prime minister defended himself, telling reporters that if he supported the clause that included LGBT people and single men, the bill would have been blocked. Single women would still be denied the opportunity to surrogacy, he argued, reported Channel News Asia.

Netanyahu promised to back a future bill supporting fathers' surrogacy rights, but that wasn't enough for LGBT Israelis and their supporters.

"The gay community is going on strike! Lesbian women cannot register their children, transgender people are getting stabbed in the street, youths are experiencing LGBT-phobia in educational frameworks, the Knesset (parliament) passes laws against equality - we will not continue our lives as usual, we will not allow bullying against the transgender community, the youths of the LGBT community and its members in the peripheries," leaders of the Aguda, the country's LGBT task force, wrote on Facebook.

It's "our turn to say no," the message said.

Last Sunday, opposition parties gathered the 40 signatures necessary to summon Netanyahu to attend a special Knesset session on gay rights to "speak publicly to defend his position on the bill," Gregory noted.

"There has been a lot of galvanizing momentum that happened as a result of everything over the weekend," he said.

A Wider Bridge has been working with LGBT organizations outside of Tel Aviv in more rural regions and the settlements and within conservative communities, such as the Jewish Orthodox and Arab, to advocate for LGBT rights, he noted.

Corporate backing
Trade unions and corporations were among the supporters of the strike.

Two companies counteracted Israel's new law, offering support to employees who use surrogacy as an option to start a family.

Microsoft and Mellanox even announced financial support for employees who want to start a family utilizing surrogacy, regardless of their sexual orientation or gender identity.

"The current version of the surrogacy law excludes the LGBT community and deprives them of the basic and human right to establish a family. This is an unfortunate and unequal law," representatives of Microsoft said in a statement obtained by Gay Star News.

The company will now offer $16,400 to every employee who decides to start a family using surrogacy.

Mellanox plans to offer the same amount of money, as well as paternity and maternity leave for surrogate parents, reported GSN.

"We are amazed to see all the corporations that lend their support to LGBT people in Israel, giving them a free day off," said Gregory, noting that YouTube offered free ads to the LGBT community in Israel. "There are a lot of positive things happening from corporations to support the community right now."

Promoting a progressive image
For more than a decade Israel has touted itself as being the Middle East's only gay-friendly country, attracting thousands of travelers to its Mediterranean shores, especially during Tel Aviv Pride.

Homosexuality is criminalized and sometimes punishable by death in a majority of Middle Eastern countries.

However, once the glamour of Pride is gone, the reality of life for LGBT Israelis isn't quite as progressive. While LGBT people can serve openly in the Israeli Defense Force, same-sex marriage is only recognized when weddings happen abroad, and the pro-gay laws the country touts aren't codified, meaning the rights can be taken away at any moment.

Violence has marked Israel's LGBT community within the past decade. In 2009 there was an attack at Tel Aviv's gay youth center. Beyond Tel Aviv's city limits, anti-LGBT harassment and discrimination are prevalent. Jerusalem Pride has been marred by violence - including the death of 16-year-old Shira Banki by Yishai Schlissel, an ultra-orthodox anti-LGBT Jewish man, at the 2015 event.

"Although Israel has a very liberal image concerning gays, it's not the case when you look at the Israeli law," former Israeli lawmaker Nitzan Horowitz told ABC News at the protest. He called for amendments to ensure equal treatment for the LGBT community.

The new draft document defines marriage as a union between two people, reported Reuters. The definition is a change from the 1976 clause that limited marriage to being between one man and one woman.

If approved, the new constitution could pave the way for same-sex marriage in the Caribbean island nation.

Communism is also being redefined and softened in the draft constitution, allowing private businesses and property ownership and term limits on the president, Homero Acosta, Cuba's secretary of the council of state, told Reuters.

"This does not mean we are renouncing our ideas," he said. "We believe in a socialist, sovereign, independent, prosperous, and sustainable country."

Earlier this year, Miguel Diaz-Canel Bermudez, who was approved by Cuba's National Assembly, was sworn in as president.

It will take months before the draft constitution will become official. It will undergo a series of public meetings around the country before being voted on in a national referendum, reported the New York Times.

Representatives of the Times acknowledged the censorship, stating that it wasn't their decision to remove the articles. The government or the independent printer in the region removed them.

The New York Times International is printed by Doha, a local distributor.

"While we understand that our publishing partners are sometimes faced with local pressures, we deeply regret and object to any censorship of our journalism and are in regular discussions with our distributors about this practice," a Times spokesperson told ABC News.

Homosexuality is illegal in Qatar.

Qatar is scheduled to host the 2022 World Cup.

Censorship of the articles could mean Qatar violated its agreement with FIFA, which oversees the soccer event. Minky Worden, director of the global initiative for Human Rights Watch, told ABC News.

"As the next host of the World Cup, Qatar should be responsible for implementing FIFA's human rights policies as an example to the participating countries," Worden wrote in the complaint. "The censorship of the media has also been noticed by the LGBTQ community as a sign that they are not welcome in Qatar."
Andreas Graf, human rights manager at FIFA, responded to Worden's complaint, stating Qatar "is not subject to FIFA's statutes, nor is it bound by FIFA's human rights policy and related FIFA regulations."

Graf added that FIFA was, however, investigating the suspected censorship.

The office also defended Qatar's hospitality and desire to welcome everyone from around the world to attend the World Cup 2022 in the statement.

"Qatar is a welcoming and hospitable country. We view the 2022 World Cup as a precious opportunity to bridge cultural divides and to serve as a unique platform for bringing people together," the statement said. "We look forward to people from all over the globe converging on Qatari soil - of different ethnicities, languages, religions, and cultures - uniting through a shared passion for football."