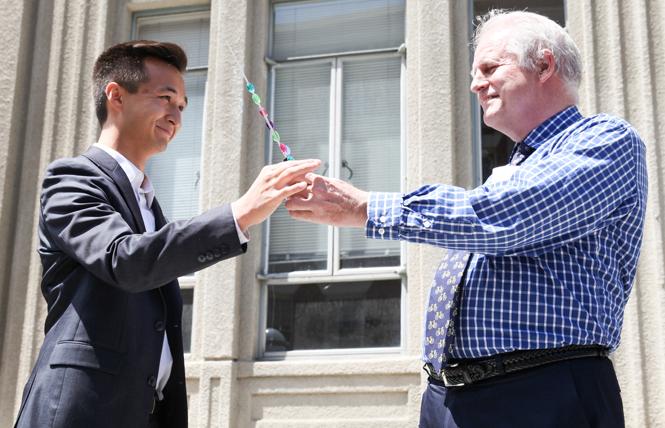 Berkeley will say goodbye to its first openly gay city councilman after Kriss Worthington announced last week he would not run for re-election in November.

"Kriss Worthington was a trailblazer and a pioneer in so many of the LGBTQ community's battles of the past few decades," said Lester Aponte, president of the southern California Stonewall Democratic Club. "In fact, he was ahead of his time on the importance of marriage equality. He opened the door for the LGBTQ leaders of today, and his voice will be sorely missed. We wish him a long and joyful retirement."

With a pair of running shoes in one hand and a bejeweled baton in the other on the front steps of Berkeley City Hall July 19, Worthington, 64, broke the news of not seeking re-election by symbolically and literally handing the baton to Rigel Robinson, a 22-year-old straight ally, who is running for Worthington's District 7 seat.

When first elected in 1996, as the Bay Area Reporter noted in an online story about his announcement last week, Worthington advocated for marriage equality, a topic then considered controversial, even for Berkeley, a predominantly liberal community.

"One of the very first things I did, which sounds sort of funny today, was in 1996 when I first got elected. I proposed that Berkeley support marriage equality," he told the B.A.R. "Berkeley became the first City Council in the nation to endorse marriage equality."

When asked about the accomplishments he is most proud of, Worthington also noted helping pave the way for more diverse commission appointees in the East Bay city.

He said he did this simply by reaching out to members of minority communities and letting them know there were open commission seats.

Worthington has also been a proponent of empowering student voices throughout his tenure, including appointing them to various oversight panels.

James Chang, an elected commissioner on the Berkeley Rent Stabilization Board and legislative assistant with the city, introduced Worthington at the announcement at City Hall and thanked him for encouraging young voices.

Worthington's endorsement of Robinson is another example of his passion for fostering young people's interest in politics. Robinson is the former vice president of external affairs for the Associated Students of the University of California and was an intern for former City Councilman Jesse Arreguin, who is now the mayor.

"For many years now, Kriss Worthington has been the representative students needed in City Hall to make sure students are heard," Robinson said on the steps of City Hall.

In his speech, Worthington applauded Robinson's work at the state level at the UC Board of Regents. The councilman explained that he's supporting Robinson because he is focused on many of the same issues he has prioritized.

Worthington told the B.A.R. that when he first started as a councilman, progressives were in the minority. He was reassured in his decision not to seek re-election, he said, because the council's makeup now favors progressives.

"It would be a different decision if we were still a minority and most of my energy was spent on stopping bad things. I would have been more hesitant to hand over the reins," he said.

Worthington's retirement means that Berkeley may just have one out City Council member come January: Lori Droste, a lesbian, is up for re-election this year and so far has three challengers, according to the Berkeley City Clerk's website.

There is one other person who has announced they are running for the District 7 seat, Aidan Hill, who identifies as nonbinary, according to an article in the Daily Californian.

At the end of his speech, Worthington received many hugs and warm wishes. A friend of his in the audience praised Worthington's work in the LGBT community. Bob Dixon, a 24-year resident of Berkeley and a gay man said, "He helped with a lot of things big and small. He helped get the first gay and lesbian family night at the YMCA. We regret he's not running."

Also in the audience was Andy Katz, a member of the East Bay Municipal Utility District Board of Directors, who recently came up short in the June primary race for the open 15th Assembly District seat in the state Legislature.

"He's been a real local advocate for LGBT rights, affordable housing, and fighting inequality," Katz, a bisexual man who also identifies as gay, said. "His legacy is hard to sum up with any one accomplishment."

Worthington has about four months remaining on the City Council, after which, he said he is unsure of his next professional steps, though he could see himself at work in the nonprofit sector.