Sheehy gets waiver to look for new job 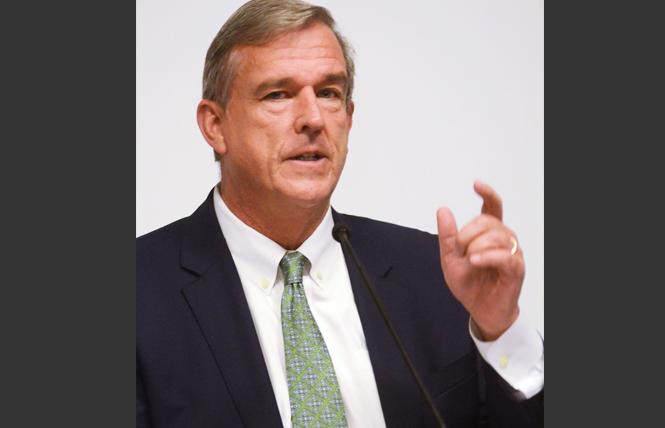 Gay former District 8 supervisor Jeff Sheehy received a waiver from the San Francisco Ethics Commission last week so that he can look for new employment within the University of California system.

Sheehy sought the waiver because, as a member of the Board of Supervisors, he voted on three contracts that involved UC as a party. Two of those were approved for legal settlements; the third was an approval of a UC grant to the San Francisco Department of Public Health.

He is now seeking employment with UC, where he worked before becoming a supervisor.

At a hearing Friday, July 20, ethics commissioners did not have a problem with granting the waiver and did so on a 5-0 vote. Commissioner Paul Renne noted that none of the contracts benefitted UC or the city. (The DPH grant was to fund certain health care services and research, and the total amount was $144,996.)

Prior to being appointed to the board by the late mayor Ed Lee, Sheehy had worked in communications at UCSF. In a letter to the commission, he said that finding suitable employment was critical for him and his family, especially regarding health benefits.

"The loss of health insurance is particularly concerning because I am HIV-positive," Sheehy wrote in his letter.

He said that meant he needed to seek employment from large employers who offer generous benefits. He also pointed out that he has 17 years of prior service with UC and would be entitled to full health care coverage for him and his spouse if he accrues three additional years of service.

His husband, Bill Berry, he wrote, is a real estate transaction coordinator and is an independent contractor.

"As such, he does not receive benefits in connection with his work," Sheehy wrote. "We have a teenage daughter. All three of us have relied on my salary as our primary source of income, and relied on the health insurance provided through my employers as our exclusive source of health insurance."

Sheehy told the commissioners that he sought the waiver "out of an abundance of caution."

Under section 3.234(a)(3) of the Campaign and Governmental Conduct Code, no individuals shall "be employed by or otherwise receive compensation from a person or entity that entered into a contract with the city within the preceding 12 months where the officer or employee personally and substantially participated in the award of the contract."

Sheehy also told the commissioners that there is still stigma around HIV, which could limit his employment opportunities.

"I am a 61-year-old person living with HIV," he said. "Stigma still exists, and I think it provides real obstacles with private sector employers.

"I am trying to do the right thing," he added.

Commissioner Quentin Kopp asked if Sheehy has a job offer.

"I have yet to interview," Sheehy said, for a position. He stopped looking at other possibilities within UC due to the waiver issue.

Charlie Marsteller told the commission that UC would be sensitive to any issues.

"I myself worked in this field for 20 years. I think we can count on the UC bureaucracy to keep a good hold on the system," he said, adding his thanks to Sheehy for his service to the city.

Sheehy told the Bay Area Reporter that he could not comment further.