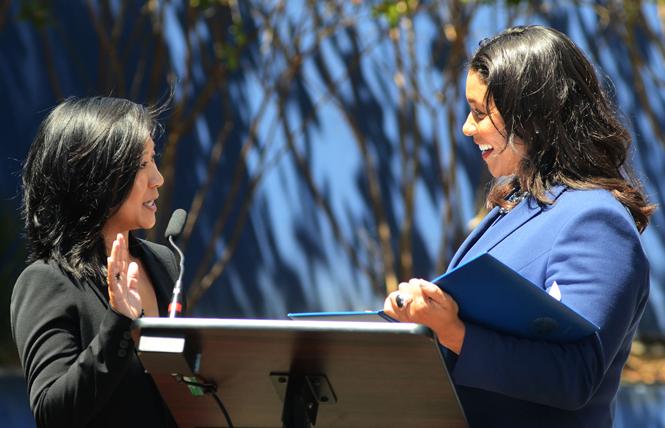 vy Lee, left, is sworn in by Mayor London Breed as the newest member of the City College of San Francisco Board of Trustees July 20. Photo: Rick Gerharter

Mayor London Breed appointed her second female leader Friday when she announced Ivy Lee as the newest member of City College of San Francisco's Board of Trustees.

Lee, a former legislative aide to District 6 Supervisor Jane Kim and longtime civil rights attorney, will replace Rafael Mandelman, who left the board after being sworn in for the District 8 seat on the Board of Supervisors July 11.

Breed swore in Lee July 20 in the courtyard of the Diego Rivera Theatre at City College's Ocean Campus.

"I couldn't think of a better place to make this announcement than right here at City College," Breed, the city's first female African-American mayor, said. "People like Ivy and Supervisor Kim, who is here with us today, they made it possible for the next generation of San Franciscans to have access to free City College."

As chief of staff of Kim's legislative team since 2013, Lee, 46, helped draft the language for the Free City College program, which established San Francisco's City College as the first free institution of higher learning in the U.S.

Breed said Lee has pushed for equity programs and worked to bridge the gap between San Francisco's communities of color during her time in politics as well as a civil rights attorney defending and advancing the rights of survivors of human trafficking, domestic violence, and sexual assault.

"City College needs a fighter, someone who will take care of it for the long term," Breed said. "I am excited and honored to make this appointment. I know she will look at things and decisions from an equity lens. I know she will make the hard decisions and stand her ground."

Kim also touted Lee's accomplishments in helping draft and lead efforts to pass the minimum wage ordinance in the city, which raised the minimum wage to $15 an hour for all part-time, full-time, and temporary employees. It became effective July 1.

She was also instrumental in getting the supervisors to unanimously pass the Fair Chance Ordinance, which prohibits certain employers from asking about arrest or conviction records on job applications.

"She answers to no one but the community," Kim said. "Ivy, I have learned, will do whatever she wants even if I disagree, but I always 100 percent trusted it was because she believes it's what is best for our community and city and she is often, if not always, right."

Lee began to cry when she told the story of her grandmother who taught her the importance of education. Lee said education is what allowed her to be where she is today.

"Education and teachers, both in and out of school, have made all the difference in my world," Lee said.

She concluded her speech by thanking her three children, two of whom were in the audience, and her husband, San Francisco Superior Court Judge Victor Hwang.

Mandelman, a gay man, was there to support Lee's appointment, a decision he called "great." The newly elected District 8 supervisor said Lee is the right choice because she is familiar with the college, has strong support from the community, and is the reasonable, rational person the board needs.

"City College has had some really rough times, and things have improved but it's not out of the woods yet," he told the Bay Area Reporter. "The college needs steady, responsible leadership, and she is that and she is passionate about the students City College serves."

Tom Temprano, a gay man and current City College trustee, said he was glad to see the board gain Asian Pacific Islander representation, something it has been lacking.

"The board has had no API representation for the past several years at a college where over one-third of its students are API," he said.

Temprano said with the help of Lee, the board will focus on ensuring the Free City College program is rolled out effectively and that the college's programs and class schedules reflect the needs and wants of the students.
One student in the audience, Man Yu, 16, was touched by Lee's speech, particularly the part about her grandmother riding the bus for three hours a day to attend an English as a second language course.

Though Yu was not familiar with Lee, he said, "I think she'll do a really good job."

Lee will not have to seek election until November 2019.
I