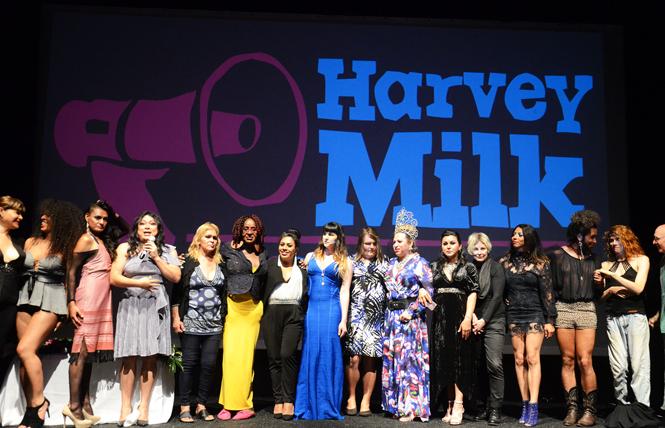 Award recipients from the Harvey Milk LGBTQ Democratic Club all gather on stage near the end of the club's annual Dinner and Gayla July 19. This year all the awardees were transgender people. Photo: Rick Gerharter

Transgender people took center stage at the Harvey Milk LGBTQ Democratic Club's 42nd annual dinner and gayla, with all of the honorees hailing from the trans community.

Over 200 people attended the July 19 event at Gray Area, which honored those whose work has benefited the community and moved the cause of LGBTQ rights forward.

Many other trans people attended to show their support for the honorees and to express joy that members of their community were being recognized. Martin Rawlings-Fein, a transgender man, was particularly thrilled by the recognition of trans people at the dinner.

"This is an event that's so amazing because they're honoring trans people, and that's so hard to come by in this political climate," Rawlings-Fein, 41, said. "Over the next year I want to see the club get trans people on the school board and work on our affordable housing issues. I think we can do it because we have the amazing Supervisor Rafael Mandelman. A lot of this is about compassion - let's bring that back to politics."

Mia Satya was one of the evening's awardees. Satya, a trans woman who is also running for school board, said that she was honored to receive the Jazzie Collins Trans Rights Advocate Award.

"Jazzie is one of the reasons I joined the club," Satya told the Bay Area Reporter. "I am inspired by her activism and I want to live out her legacy. I hope the club can continue to succeed in electing progressive candidates up and down the ballot."

Mandelman, whose election to the Board of Supervisors resulted in a 6-5 progressive majority, said the Milk club, for which he previously served as president, was his favorite political organization.

"I'm seeing a lot of old friends and new friends and some terrific honorees," Mandelman said. "This club represents our connection to the roots of our progressive politics. It's a place where new generations of progressive queer activists can find a way to engage in San Francisco politics."

Before the awards were handed out, transgender entertainer Pearl Teese performed to thunderous applause. Milk club Co-Presidents Honey Mahogany and Carolina Morales then took to the podium, thanking everyone for coming. They pointed out that Mahogany was the club's first African-American transgender co-president and that Morales was the first queer immigrant co-president.

"Across the country more and more progressive women, women of color, and trans women are running for office," Mahogany said.

"We want San Francisco to be the leader in fighting the racist, xenophobic policies of this administration," said Morales, referring to President Donald Trump.

Kung Feng received the Howard Wallace Labor Leadership Award for his work in fighting for workers' rights. He is currently the interim executive director at Jobs With Justice San Francisco and co-founded Bay Resistance.

Fresh Meat Productions was given the Sylvester Pride in the Arts Award for creating, presenting, and touring year-round transgender and queer performing arts programs.
El/La Para TransLatinas received the Hank Wilson Activist Award. The organization is focused solely on serving transgender Latinas in the Bay Area.

And, finally, Jennicet Gutierrez received the Harvey Milk In His Footsteps Award for her work on behalf of transgender women in immigrant detention centers. In 2015 she interrupted former President Barack Obama at a White House speech during a reception in honor of Pride Month to call attention to the struggles of immigrant transgender women.

There was much cheering for each of the honorees, with some praising the Milk Club.

"It's a great organization," said Samuel Harrison, a gay man. "I try to attend their events when I can, and with the current regime it's important to be politically active. Kudos to the trans awards this year and to the wonderful recipients. As we saw in the mayoral election, every vote does matter, so organize and resist."

He was referring to the fact that while gay progressive candidate Mark Leno was initially ahead in the June 5 mayoral election, ultimately moderate London Breed won the race and took office July 11.

Co-President Morales told the B.A.R. that she was thrilled at how the evening went.

"I'm ecstatic that we had a packed house," she said. "We can see that we had a very diverse crowd. This is my second year as co-president of the club and it's been my hope to bring more queer and trans people of color's voices and participation in all club activities. In what I have left of my term, I want to help our city take back more districts to make sure that we have a progressive majority on the Board of Supervisors and I think our club is best positioned to lead that fight."

It was announced that the club would commemorate the 40th anniversary of Harvey Milk's assassination on November 27. Milk, the first gay man elected to office in San Francisco and California, and then-mayor George Moscone were shot to death by disgruntled ex-supervisor Dan White on November 27, 1978.