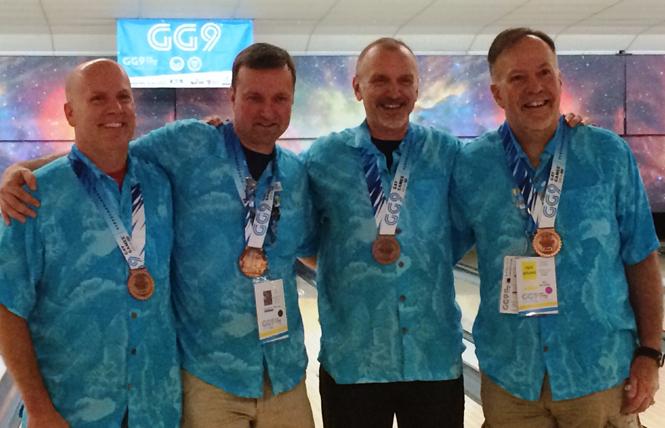 There are some things we know about the Gay Games before they occur every four years. We know, for instance, that on August 4 in Paris, some 10,000 participants will parade into Jean Bouin Stadium to a cheering crowd, and for some it will be the first time they have been able to feel proud and safe to be who they are.

We know lives will be changed. We know that when the athletes go home, some will feel empowered to volunteer to give back to their communities, some will have newfound courage to come out, and some will be focused on becoming better at their sports to improve their performance four years later.

We know this because it happens time and time again - nine times so far dating back to the inaugural Gay Games in 1982 in San Francisco.

Doug Litwin was living in San Francisco back then, having moved to the city in 1978 from Louisville, Kentucky, but he did not participate.

"I don't even know if I was aware of it," Litwin said.

But in 1985, Litwin joined the wind section of the San Francisco Gay Freedom Day Marching Band and Twirling Corps (Gay Freedom Day was later renamed Gay Pride Day and is now San Francisco Pride, and the band is today's SF Lesbian/Gay Freedom Band), and soon after that started bowling in a gay bowling league. He registered for the 1986 Gay Games II as a musician and a bowler. As librarian for the host band, it was his responsibility to make sure every participating musician got the necessary sheet music. And, since back then only one bowling team could represent one city, he partnered with bowlers from Pennsylvania.
Then, along with the other 3,000 or so athletes and artists, he marched in to Kezar Stadium for the opening ceremony reprise, and his life was changed.

"I had been in marching band in high school and college," Litwin, 65, said. "I was used to marching in with 50,000 spectators or more. This was different. This wasn't one team versus another. This was all of us on one team. It was amazing just to be there and see and meet my fellow gay musicians from all over the world. I remember the joy and the vibe and the joyousness of the whole thing."

Litwin had found what would become a major mission in his life. He got more involved with the Lesbian and Gay Band Association, first as secretary, then as president, and finally as delegate to the Federation of Gay Games, going to his first FGG membership meeting in Berlin in 1999. He's been to every annual assembly meeting since then except for two.

Now, here's the difference between showing up at the Gay Games to compete or play an instrument, and showing up as a volunteer or director when the next Gay Games are years away: It's the difference between eating a sausage in a restaurant, and working in the factory to make that sausage and then getting it to the diner. The joy in one task is different than the joy in the other - but there is joy in both.

"For all the people who think there isn't a need for an event like the Gay Games, I say, 'Well, I don't know how many Gay Games you've been to, but you're wrong,'" Litwin said. "You meet athletes from all over the world and you realize what a life-changing event it is for people."

No one knows that more than folks from countries where it is illegal or dangerous to be gay or transgender, where being queer can cost you your job, your freedom, or your life.

The FGG started to change its organizational structure in 2004, completing the move from a membership board to a smaller working board elected by the membership assembly in 2007. The executive committee was expanded that first year to start emulating what would become the smaller board of directors down the road, and Litwin was elected marketing officer for the FGG, a position he has held ever since.

He has also been active with Team San Francisco and for several years has been heavily involved with organizing the LGBT Night at AT&T Park with the San Francisco Giants. One year that included having gay former supervisor Bevan Dufty's child throw out the first pitch. This year it included having three individuals who had participated in every Gay Games - bowler Jim Hahn, swimmer Seth Shapiro, and track and field athlete Rick Thoman - be the ones to yell, "Play ball!" to start the game.

Litwin has also played racquetball in the Gay Games.

"Personally, I enjoy participating in both sports and culture as it lets me see the world and lets me do so in an incredibly supportive environment," he said. "There's competition, to be sure, but everyone gets a medal and that goes back to the beginning and what the event is all about. And when you win a gold medal at a Gay Games, it's different - very different than winning a medal in a tournament that might involve the same athletes."

Litwin no longer lives in San Francisco. Nervous about the potential instability of the real estate market, he sold his house in Noe Valley and moved on to a yacht in Sausalito with his partner of 12 years, Jacque Elstrom.

But he carries the joy he discovered at the Gay Games in San Francisco so many years ago, the joy of competing and performing, with him - along with the satisfaction of volunteering.

Working in the FGG "has allowed me to make a very large group of good friends who are equally committed to the mission," Litwin said. "Some of these people are just amazing. I've been there for a great deal of history. It's like the Navy: Join the Gay Games, see the world."