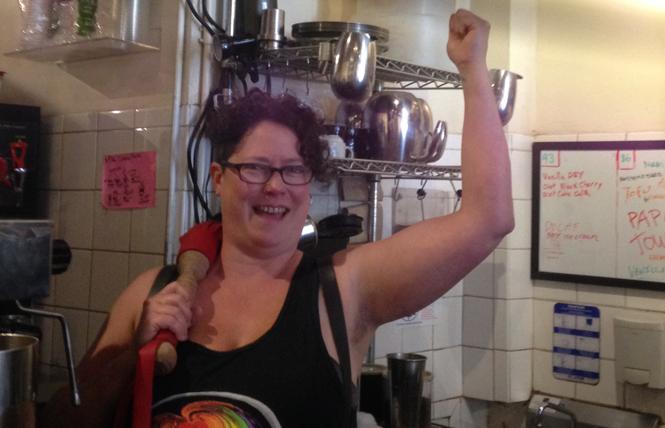 Rebeccalyn Mir Bilodeau, owner of Wicked Grounds, rallies their staff and patrons to fight a proposed Starbucks in the Leather and LGBTQ Cultural District. Photo: Christina A. DiEdoardo

"Does the man who makes the shoes own you, clown?
You can't even pry the nameplate off, now can you?
Fix it with your tiny fist there;
James Van Der Beek and them sisters from Sister, Sister;
The only one that's ever felt this is you;
The force that's forcing you;
To feel like busting up a Starbucks."- Mike Doughty, "Busting up a Starbucks" (2002)

Six months ago, Rebeccalyn Mir Bilodeau pulled off a miracle by leading a team that saved Wicked Grounds, the only kink- and leather-friendly coffeehouse on the West Coast, from closure. On Tuesday, July 17, Bilodeau did it again, assembling a coalition whose dedication and passion made a Seattle colossus blink and providing a model for other anti-gentrification activists to follow.

This time, the threat wasn't just to the bottom line of the cafe, but to the soul of the nascent Leather and LGBTQ Cultural District, which the Board of Supervisors created in May and committed the city to "mak[ing] sustainable leather & LGBTQ: housing, commerce, community development, cultural resources, physical spaces, and health care" within its boundaries.

To many, a proposed Starbucks outlet at 1222 Harrison Street at the L7 apartment complex, across the street from Mr. S. Leather and about a block away from Wicked Grounds' location at 289 Eighth Street, hardly seemed consistent with those goals.

"It's disheartening that we're fighting gentrification in the leather district just as we got the Leather Cultural District," said Bilodeau.

Of bondage and blonde espressos
To a casual observer, there might initially seem to be little overlap between the target markets of Starbucks and that of Wicked Grounds, given that the former has around 13,930 anodyne locations across the country serving an identical product, and Wicked Grounds is the only leather- and kink-friendly coffeehouse on the West Coast, but the two have more in common than most would think.

While most know it as a cafe, Bilodeau, who uses gender-neutral pronouns, said Wicked Grounds is really three businesses in one, with its educational programs (which is largely subsidized by its Patreon donors) and its boutique retail trade reliant upon the cafe being open and busy to function. Vanilla, or non-kinky, customers making impulse coffee purchases make up a good portion of the cafe's revenue, especially during the daytime.

After purchasing the coffeehouse in 2014 (ironically, as they noted with a laugh, in part with the proceeds of the sale of their Starbucks stock) one of Bilodeau's first goals was to resume daytime operations at Wicked Grounds, which had been curtailed by the previous owner due to financial strains on the business.

This forced them to confront a tough question.

"If we were going to be open during the day, what do we do? Do we hide the kink stuff somehow?" Bilodeau recalled. "We made the conscious decision not to do that, but to serve as ambassadors for the leather and kink community.

"Many of our favorite customers are not kinky, but they love the vibe of the cool 1990s coffeehouse," they said.

"This is an existential threat, and I cannot gamble with my community," they said. "Starbucks and Berg Davis [Starbucks' public relations firm in San Francisco] say they don't want to put us out of business, and I hear that, but I've also been doing the math for four years."

Based on Bilodeau's calculations, too many people choosing to follow that path of least resistance would lead not only to the extinction of Wicked Grounds and the businesses of the local artisans who supply many of its non-food products, but the end of the unpaid social support services its staff provides.

"If you come in and say, 'I'm trans and I just got thrown out of my home,' we're going to drop everything and find you resources," they said. "I would love it if we had a fully-functional nonprofit leather cultural space that worked, but we don't. This is the niche that I fill."

Horde 1, Seattle conglomerate 0
Of course, the story of beloved businesses being unable to remain open in the city despite heroic efforts is about as San Franciscan as sourdough bread. However, that Tuesday evening, something extraordinary happened as over 200 people jammed the community room at the L7 apartments for a community meeting called by Starbucks about the project.

In nearly 10 years in San Francisco, I have never seen a group of Bay Area residents as unified as that crowd was. Speaker after speaker, from veteran leather titleholders to those who had only been part of the kink community for a few months, movingly told their stories about the central role Wicked Grounds played in their lives - and how they weren't willing to sit by and let Starbucks take it from them without a fight.

Loyalty like that can't be purchased, but must be earned - and it's clearly a large part of what's kept Wicked Grounds going through almost a decade of financial travails.

"We're on our fifth life," said Ryan Galiotto, Wicked Grounds' co-founder and former owner, to laughs and cheers from the crowd. "The only reason we're still here is because the horde won't let us quit."

No one who was there that night will soon forget the looks on the faces of the Starbucks representatives - one of whom managed to flub the LGBTQ acronym in their opening statement - when Bilodeau passionately asked them, "Do you even know what a little is? What a human puppy is? What water sports are? What is Shibari?

"These are the questions my staff get every day," Bilodeau said as the crowd applauded.

By the end of the evening, it seemed like Starbucks had decided it would be better if Bilodeau and their team were the ones to keep answering them. As of press time, the chain was looking for a different location and its representatives said they wanted to work with Bilodeau to find one.

Through showing up and remaining unified, a horde of kinksters successfully faced down a $6 billion corporation and made it blink, saving not only their coffeehouse but a bit of San Francisco in the process. It's hard to think of a better definition of a successful action than that.