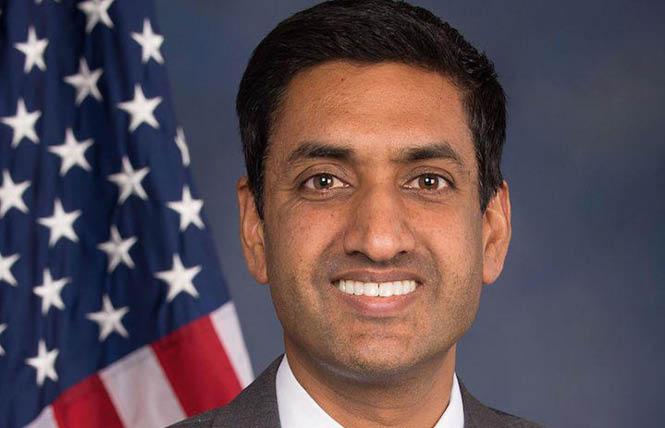 Congressman Ro Khanna (D-San Jose) is under fire from some of his constituents for endorsing Yang Shao, the Fremont Unified School District board president who is running for Fremont City Council in the fall.

Shao's anti-LGBT comments at a heated sex education debate in May have sparked concern among some parents of LGBT students in Fremont. Following a lengthy meeting, the school board voted 3-2 to adopt the comprehensive sex-ed program for seventh through ninth grade students but to exclude sex education entirely for elementary school students.

In the past, Shao publicly supported Proposition 8, the now-overturned state constitutional amendment banning same-sex marriage, according to a New York Times article published in January 2010.

Shao is a member of the River of Life board, an evangelical Christian group that has historically been strongly opposed to same-sex marriage.

Khanna received pushback for his endorsement of Shao from members of the LGBT community and straight allies at both a June 2 congressional town hall and an Empathy Alliance roundtable July 1, according to an opinion piece by Glen Shaffer that was posted on the East Bay Citizen website.

"Khanna tried to soothe the crowd by claiming to have privately 'questioned [Shao] thoroughly' and trusted his views had changed," Shaffer wrote. "Neither Stefan [an attendee at the July 1 meeting] nor other attendees had as much confidence since Shao made the transphobic comments within the last three months."

"I have one of the stronger records on LGBTQ issues in the entire Congress and am proud of BayMec and Paul Escobar's strong support," read Khanna's statement. "I publicly disagreed with Yang about the sex education vote in Fremont. But I respect his record on wanting to bring tech jobs and STEM new industry to Fremont and for all communities. He attended the LGBTQ Rights forum I organized and spoke about his support for same sex marriage, and LGBTQ equality. He said he supported my federal initiatives."

Public comment for the 2020 census open now
A group of nonprofits has come together to fight the controversial addition of a citizenship question on the 2020 census by the U.S. Department of Commerce. The Leadership Conference Education Fund and its partners are asking the public to submit comments to the census bureau at https://www.federalregister.gov/documents/2018/06/08/2018-12365/proposed-information-collection-comment-request-2020-census to ask that the citizen question be removed from the census. Public comments will be accepted until August 7.

Multiple nonprofit leaders participated in a national press call July 17 where they explained that the citizenship question could result in an inaccurate account of many immigrant communities on the 2020 census.

Because many state and federal programs depend on funding that is determined by data derived from the census, the leaders explained a miscount could result in the underfunding of programs vital to minority and underserved communities, including LGBTs.

"This morally bankrupt decision is going to affect everyone, including communities already at risk of being undercounted, including people of color, young children, and rural and low-income residents who are most at risk," said Vanita Gupta, president and chief executive officer of the Leadership Conference Education Fund. "This is the people's chance to speak directly to the Trump administration about its misguided actions to undermine the integrity of 2020 census."

In March, Commerce Secretary Wilbur Ross instructed the U.S. Census Bureau to add a question about citizenship to the 2020 census form, a decision many are calling politically motivated. There are currently seven lawsuits filed against the census bureau fighting the addition of the citizenship question.

Arturo Vargas, executive director of the National Association of Latino Elected and Appointed Officials Educational Fund, said that despite research conducted by the census bureau that showed a drop in the number of people willing to participate in the census due to the Trump administration's anti-immigrant and anti-minority rhetoric and policies, Ross still instructed the bureau to add the citizenship question.

"This is the most damaging assault on the Census Bureau being imposed by the Department of Commerce," he said.

Others mentioned what they feel is a "systematic taking down of the census," from severe underfunding of the bureau in recent years to the vacancy of leadership positions, all of which can harm minority communities.

"The trickle down impact of an inaccurate 2020 census would be severe to the black population whose inner cities and rural communities risk losing the most in terms of federal funding, political representation, and equal rights under the law," said Jeri Green, senior adviser for the 2020 census at the National Urban League.

Terri Ann Lowenthal, former staff director and policy adviser to the Leadership Conference Education Fund, also noted that many state and federal programs depend on funding that is determined by data derived from the census, meaning an inaccurate census could result in reduced funding for many programs like reduced school lunches, healthcare, and other educational programs.

"Historically, public comment periods and comments from stakeholders have been influential in modifying various aspects of the census, from what questions are asked and how they are asked," she said.

Gay U.S. history book
Attorney and LGBT activist Zaylore Stout is the author of a new book, "Our Gay History in 50 States." The coffee table book explores the LGBT history of all 50 states, demonstrating the vastly different cultures and stories of the LGBT community from the West Coast to the East Coast.

"The book tells the story of queer American history on a state-by-state basis, including significant people, places, and events so that the success and struggles and contributions of the LGBTQAI communities are remembered and celebrated by future generations," said Stout in a promotional video.

Through his law firm Zaylore Stout & Associates, Stout has represented HIV-positive and transgender employees who were discriminated against in the workplace. He also volunteers through the LGBT Law Clinic and serves on the board for RECLAIM, a Minnesota-based LGBT nonprofit. He also ran unsuccessfully for city council in St. Louis Park, Minnesota where he championed the call for the passage of a gender inclusion policy to protect transgender and gender-nonconforming youth in schools.

Stout ran a Kickstarter campaign to fund the book. According to the website, the book is expected to be available this month.

The book, which costs $45, is also available to preorder at https://www.gay50states.com/.

LGBTQ update is a weekly online column addressing issues affecting the community. It runs on Tuesdays. Please submit comments or column ideas to Alex Madison at (415) 875-9986 or a.madison@ebar.com.