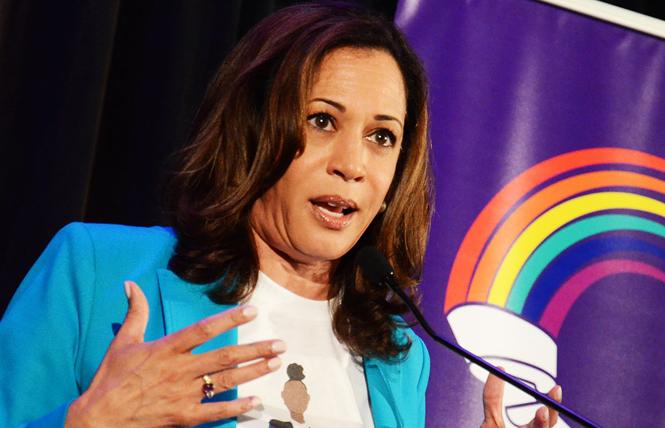 Powerful women were front and center at Sunday's Alice B. Toklas LGBT Democratic Club Pride Breakfast, and the three main speakers did not disappoint.

The keynote speaker, Senator Kamala Harris, urged attendees to "fight for the best of who we are and what we can be," as the nation experiences deep divisions in the era of President Donald Trump.

Ticking off a list of issues where she believes the president is wrong, including human rights and the environment, Harris, California's junior senator, said she thinks the administration has "a fear of the present and future."

"We need to march with pride and speak with pride because we are on the right side of history," Harris told a sold-out audience to applause at the Hyatt Embarcadero June 24.

She said that she rejects the notion, put forth by the president and other Republican leaders, that Democrats, such as herself, somehow don't love America.

"I believe we are a great country," Harris said, adding that the ideals contained in the Constitution, the Declaration of Independence, and the Bill of Rights are worth fighting for.

"And fight we will. It's our flag too," she said, mentioning not only the stars and stripes, but also the rainbow flag that symbolizes LGBT rights. "And we know we aren't going to accept any false choices. We are also here and clear-eyed."

Harris, who has not ruled out a 2020 run for the presidency, according to MSNBC, said she was heartbroken when she addressed a room full of California teenagers, including her 19-year-old stepdaughter.

"The first questions was, what do we do about a divided America?" Harris recalled. "That broke my heart. I said, 'I reject the premise - we have so much more in common.'"

But Harris did acknowledge that the country has its problems, including racism, sexism, homophobia, and transphobia. Those things are real, she said.

"America has a problem with mass incarceration, and the Department of Justice is reviving the failed war on drugs," Harris said.

And she had harsh words for Trump and the Department of Homeland Security, which have been in the news for the last week over the president's controversial childhood separation policy that ended when he signed an executive order several days ago, though most of the more than 2,000 detained children have yet to be reunited with their parents.

"Ripping children from the arms of their parents is not border security," Harris said.

San Francisco Mayor-elect London Breed received a standing ovation and applause when she made brief remarks. Breed, who will be sworn into office July 11, was gracious to her main opponent, gay former state Senator Mark Leno, who did not attend, but who, like Breed, was endorsed by the Alice club.

"I just want to take this opportunity to thank Mark Leno," she said. "Mark Leno has a legacy of important work, not just for LGBTs, but the entire city. He has extended his hand to continue to do great work for the city, and I'm grateful for that."

"I can't wait to roll up my sleeves and get to work," she added. "We have so much to do, but today, we celebrate."

Former Alice co-chairs Rebecca Prozan and Susan B. Christian paid tribute to Julius Turman, a gay man and former city police commissioner who died in May.

Prozan noted that Turman was an Alice co-chair in 2007 when Elizabeth Edwards, then the wife of presidential candidate John Edwards, spoke at the Pride breakfast and gave her support for same-sex marriage.

The women announced that the club would be creating an award in Turman's memory to support the next generation of diversity in local politics.

"It is only the beginning for what she's going to do next," he said.

Kendell, who's on something of a farewell tour among LGBT organizations until she steps down at the end of the year, reiterated that the word that best sums up her 22 years at the helm of NCLR is "gratitude."

NCLR was instrumental in the fight for marriage equality, and Kendell worked with Herrera's office in the federal trial in San Francisco that overturned Proposition 8, the state's same-sex marriage ban, that later went to the U.S. Supreme Court and was tossed out on a technicality, allowing same-sex weddings to resume in the Golden State.

"We have so changed the landscape," Kendell said, referring to the progress that's been made over the last two decades. Being queer in the U.S., for the majority of people, is a safe thing, she said.

But she added, "there are still folks who suffer horrific attacks."

She also criticized the Trump administration, particularly Immigration and Customs Enforcements and the Border Patrol.

"Who has any doubt that we will bend the arc for these folks?" she asked.

And while she said, "The vast majority don't need to worry about ICE showing up," she also asked the audience to do their part in combatting the administration.

"What I'd exhort all of us to do ... is say, 'you're not getting to them without coming through us.'