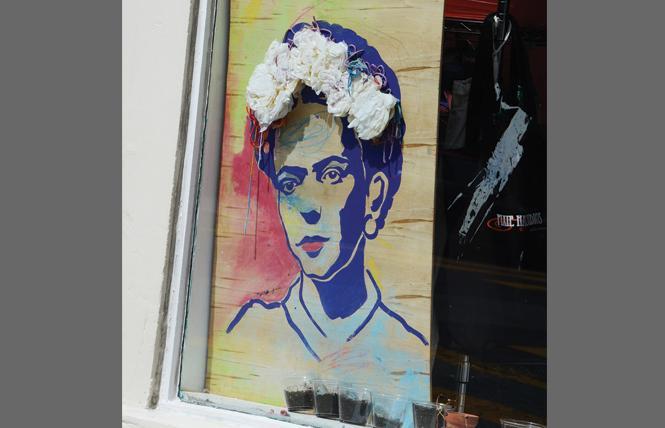 A painting of Frida Kahlo sits in the window of Pixie Hall Studios in Noe Valley. Photo: Rick Gerharter

San Francisco's Phelan Avenue is one step closer to being renamed after celebrated bisexual Mexican artist Frida Kahlo after a Board of Supervisors committee gave its endorsement to the proposal.

The three members of the board's Land Use and Transportation Committee unanimously voted to recommend the street be renamed Frida Kahlo Way late Monday afternoon (June 11). It will now be taken up by the full board at its meeting Tuesday, June 19.

As predicted by Supervisor Norman Yee, who is spearheading the name change proposal, today's meeting drew many upset Phelan Avenue residents who don't want to see the street renamed. But it also brought out supporters who want to see the city update the street name.

The three-block street runs through City College of San Francisco's Ocean campus. It is named after James Phelan, a banker whose son, James Duval Phelan, was a former United States senator and San Francisco mayor whose legacy is fraught with racism and xenophobia.

The younger Duval's famous campaign slogan, "Keep California White," was used during his senatorial re-election campaign in 1920 to further anti-immigration in California, particularly of Asian people.

Although the street is technically not named after the former mayor Phelan, the association to his racist past was enough to prompt its removal by Yee. The District 7 supervisor has been working for more than a year to get it changed.

Public comment was pretty much split down the middle for those in favor of the street rename and those who are against it.

"Our city is filled with good and bad history, but that is the history that has made our city today. We don't tolerate hate or racism, but erasing history perpetuates hate," said Phelan Avenue resident Bonnie White, who spoke in opposition of the street name.

Deborah Fitzpatrick, also a resident of Phelan Avenue, called the renaming a marketing scheme by City College. The City College board voted on the change and submitted its official street name nomination to Yee in February.

The college trustees do not have the power to change the street name, which is the official address of City College's main campus.

"This is a huge marketing ploy by City College," said Fitzpatrick, a Hispanic woman who also took aversion to Kahlo herself. "You're changing one name of a racist to another person who had a very controversial background and was a proponent of the communist party."

Other detractors of the proposed name talked about the neglect of residents in the renaming process and called it "bias" and "unfair," while others simply said they don't want to deal with the hassle that the name change may present.

Speaking in favor of the name change was Janey Skinner, a coordinator for City College's Trauma Prevention & Recovery Certificate program.

"My students had a great interest in Frida Kahlo. They thought she was a fascinating woman," said Martin. "She inspired them as a woman, a woman of color, and a person with a disability in spite of which created remarkable art."

"San Francisco used to be the capital of discrimination against Asians," he said. "Today, we are a different city and our street names should reflect that."

After public comment, Supervisors Jane Kim, District 6, and Ahsha Safai, District 11, asked to be co-sponsors of the resolution. They voted in favor of the proposal, along with committee chair District 4 Supervisor Katy Tang.

Yee, whose district includes the City College campus, announced April 4 that a street renaming committee, which included Phelan Avenue residents, voted in favor of naming the street after Kahlo, who died in 1954.

Residents had the chance to vote for four names, including Freedom Way, after African-American dancer and writer Thelma Johnson Street; Chinese-American historian and community activist Him Mark Lai; and Muwekma Ohlone, an indigenous tribe from the Bay Area.

If approved by the board next week, Yee said it would take anywhere from six to nine months to install the new street signs. Frida Kahlo Way would appear alongside Phelan Avenue on all the signage for five years, ensuring residents and business owners have enough time to make changes to their addresses.

The name changing is part of a local and nationwide movement to replace names and monuments of people who no longer represent the values of today's society. It would also mark another city street named after an LGBT luminary.