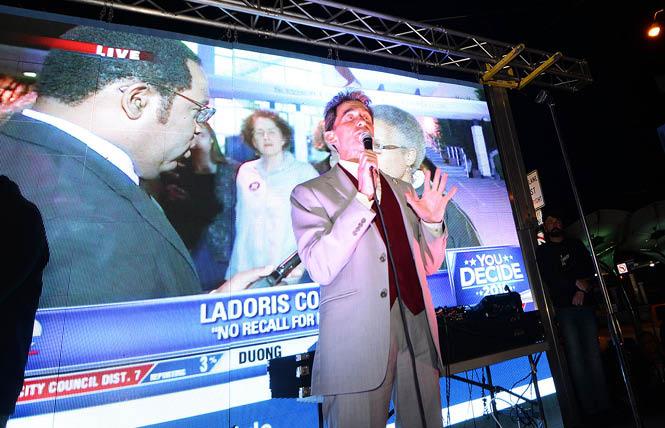 Gay mayoral candidate Mark Leno fell to second place over the weekend in his bid to become San Francisco's first out LGBT mayor.

Up until Saturday, Leno had been the top finisher with Board of Supervisors President London Breed, who represents District 5, trailing behind him in second place. But when additional votes were tabulated Saturday afternoon, Breed had overtaken Leno for first place.

Her lead continued to grow Sunday afternoon. According to the unofficial returns, Breed was in first place with 50.38 percent of the vote after nine rounds under the city's ranked-choice voting system. Leno was second with 49.62 percent of the vote, as Breed had a 1,580-vote edge in the race.

Because none of the eight mayoral candidates received a majority of the votes in the first round, the third and second place votes of the candidates with the least number one votes are tabulated until a winner emerges with 50 percent plus one of the vote.

Since Wednesday, Breed has been steadily gaining on Leno as elections officials tabulate more ballots. They have been updating the tally daily at 4 p.m., and as of Sunday night, still had 25,000 ballots to count.

District 6 Supervisor Jane Kim has remained in third place with 27 percent of the vote. She had teamed up with Leno to urge their supporters to vote for the other one as their number two choice in the race. And until the weekend, it had looked like the strategy was working to the benefit of Leno.

Kim, in fact, had all but conceded the race to Leno on Wednesday, saying in an emailed statement that, "it looks very likely that Mark Leno will be elected San Francisco's next mayor."

That result is now very much in question.

On the Peninsula, Gary Waddell, Ph.D., is waiting to see if his slight lead holds in the contest for San Mateo County Superintendent of Schools. On Election Night he was ahead 50.2 percent to his opponent, Nancy Magee, who was trailing with 49.8 percent of the vote.

After elections officials updated the vote count Thursday afternoon, Waddell remained in first place with 50.4 percent - or 32,576 votes - while Magee continued to closely lag behind with 49.6 percent - or 32,075 votes. The next update will come Tuesday at 4:30 p.m.

The two out candidates are colleagues at the county education office and are running to succeed lesbian San Mateo County Superintendent of Schools Anne E. Campbell. After serving two four-year terms in the position, Campbell opted not to seek re-election.

In the East Bay, Jovanka Beckles, a lesbian who sits on the Richmond City Council, had catapulted into second place Friday afternoon and saw her vote count grow over the weekend to 15 percent of the vote in the race for the open 15th Assembly District seat, which stretches from Richmond south into parts of Oakland. Assemblyman Tony Thurmond (D-Richmond) is running to be the state superintendent of public instruction.

According to the unofficial returns from Contra Costa and Alameda counties, Beckles as of Saturday had 12,135 votes. Oakland City Councilman Dan Kalb, who had been in second place, is now in third place with 11,851 votes, or 14.8 percent.

Former Obama staffer Buffy Wicks continued to have a dominating lead with 25,279 votes, or 31.5 percent of the total. As of Friday, there were still 231,397 ballots to be counted in the two East Bay counties, according to the secretary of state's office.

Two days after the election Beckles had been 304 votes behind Kalb. But she had refused to concede the race, and in a statement released Thursday, Beckles said she was waiting for all the ballots to be counted before doing so.

"I am gratified that the candidates presented voters with a substantive contest and I thank my supporters for their hard and successful work," she stated. "Dan Kalb has my highest respect and I'm sure that whether he or I prove to be the second-highest vote-getters in the next few weeks, the choice facing voters in the fall will be clear."

In southern California lesbian health care leader Marge Doyle was also holding out hope that her vote tally would increase once the remaining ballots are counted. She hopes to advance to the fall election to take on Representative Paul Cook (R-Yucca Valley) for his 8th Congressional District.

In a note to her supporters Thursday afternoon, Doyle said she would wait for a final count before conceding defeat.

"As you know, the secretary of state has not yet certified Tuesday's primary election results as they are still counting the vote-by-mail ballots. I am waiting, too, for the final count," she wrote.

The Political Notes column is going on a summer hiatus. It will return Monday, July 30.