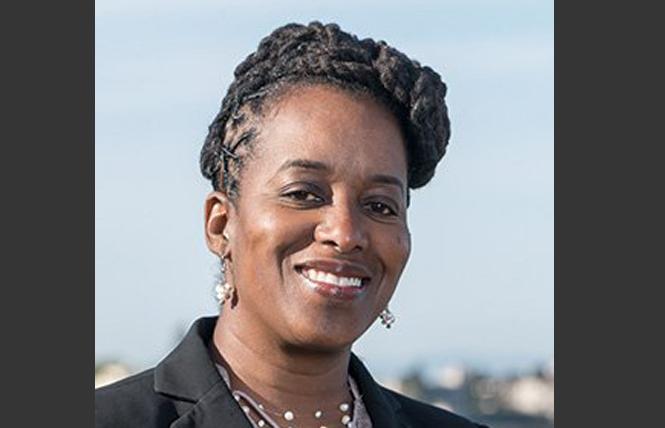 Jovanka Beckles is now ahead of the third place finisher in the 15th Assembly District race.

Jovanka Beckles, a lesbian who sits on the Richmond City Council, catapulted into second place Friday afternoon in the race for the open 15th Assembly District seat, which stretches from Richmond south into parts of Oakland. She now has a 567-vote lead over the third-place finisher.

The current officeholder, Assemblyman Tony Thurmond (D-Richmond), is running to be the state superintendent of public instruction.

According to the latest unofficial returns from Contra Costa and Alameda counties, Beckles saw her vote total increase to 10,718 votes. Oakland City Councilman Dan Kalb, who had been in second place, fell to third place with 10,151 votes.

Former Obama staffer Buffy Wicks continues to have a dominating lead with 22,505 votes. Under the state's "jungle primary" system, the top two vote-getters in the June 5 primary race will compete against each other in the November 6 general election.

On Thursday, Beckles was 304 votes behind Kalb but had refused to concede the race. In a statement released that afternoon, Beckles said she was waiting for all the ballots to be counted before doing so.

"I am gratified that the candidates presented voters with a substantive contest and I thank my supporters for their hard and successful work," she stated. "Dan Kalb has my highest respect and I'm sure that whether he or I prove to be the second-highest vote-getters in the next few weeks, the choice facing voters in the fall will be clear."

According to the secretary of state, there are still tens of thousands of ballots to be counted in the two East Bay counties, so the vote totals in the 15th Assembly District race could still change in the coming days.

The contest was the only competitive state legislative race in the Bay Area with out candidates. Judy Appel, a lesbian who sits on the Berkeley school board, and bisexual East Bay Municipal Utility District board member Andy Katz both came up short in their bids to represent the district.