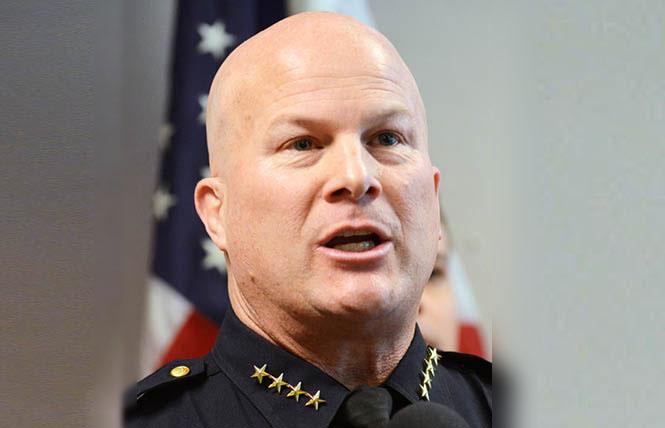 In a move that city officials are praising, the San Francisco police officers who sent homophobic and racist text messages in 2011 and 2012 can face disciplinary charges, an appeals court ruled this week.

The decision came after the 1st District Court of Appeals overturned a judge's ruling that found the charges against the offending officers had come too late to be prosecuted.

Former Police Chief Greg Suhr waited until after the federal trial of a police sergeant involved in the texting scandal ended to file disciplinary charges against the nine officers involved in the text exchanges. On Wednesday, the appeals court found that Suhr's decision to wait did not impede his ability to take disciplinary action and that the one-year deadline was suspended in this case because of the criminal investigation of the sergeant, who is no longer with the force.

The dozens of text messages exchanged included derogatory references to lesbians, gays, and transgender people as well as African-Americans and Asians. They included the word "fag," referred to African-Americans as "monkeys," and encouraged the killing of "half-breeds."

The text messages were brought to the attention of the SFPD by federal prosecutors in December 2012, but were not made public until March 2015 by Suhr, who at the time announced he would fire the officers involved. The nine officers are still employed by the SFPD, though they have been on paid leave since 2015.

City Attorney Dennis Herrera praised the ruling in a statement.

"We're very pleased the court found that police officials do not have to compromise a criminal investigation in order to pursue discipline against officers accused of abhorrent behavior," Herrera said in a statement. "Forcing public officials to choose between the two would have made a mockery of justice."

This ruling upholds police department's ability to coordinate with federal investigators to expose dirty cops and protect the public."

Herrera also recognized how damaging the text messages were, adding, "There is no doubt that the public's interest in the integrity of SFPD was undermined by the offensive text messages. The attitudes reflected in these messages displayed unacceptable prejudice against members of the communities SFPD is sworn to protect. It is high time to proceed with a full and fair disciplinary process for the officers in question."

Tony Montoya, a gay man who's the new president of the San Francisco Police Officers Association, also praised the ruling in a statement.

"As the POA has said from the beginning, we condemn the appalling racist behavior committed by a handful of officers," he said. "They disgraced the uniform, the profession, and themselves. That statement holds true today. These few officers by no means represent the men and women who make up the SFPD and the outstanding work they do on a daily basis.

"We agree with the city attorney that, like others who commit wrongs in our society, they should now have a full and fair disciplinary process before the Police Commission," Montoya's statement read.

As previously reported by the Bay Area Reporter, the texting scandal was spawned by the federal case against former Sergeant Ian Furminger, which resulted in 14 officers being the target of a police investigation. A motion filed in that case in March 2015 revealed that Furminger and other officers had sent texts in 2011 and 2012 using the N-word, "fag," and other derogatory terms.

Furminger, who was convicted in December 2015 of stealing and other crimes, left the department not long after his conviction. Among the 14 officers involved in the text exchange was Officer Michael Robison, who is gay. Robinson resigned in 2015.