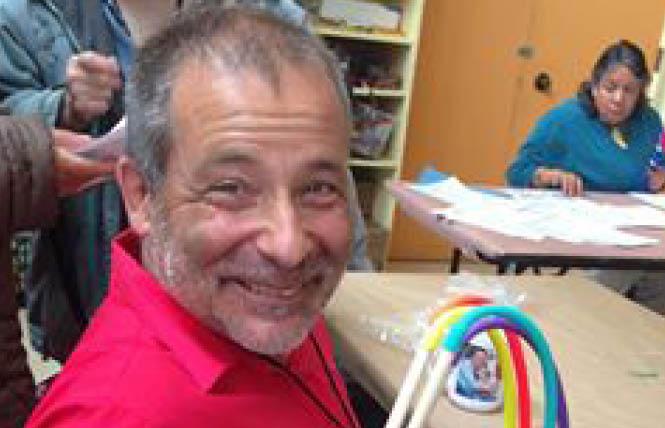 Brian Lee has been reported missing.

After missing for a little over three days, Brian Lee, a gay man who is developmentally disabled, was found around 1 p.m. Thursday (May 31) at Glide Memorial Church, 330 Ellis Street. Lee, 52, was found by Ken Jones, a board member of Pomeroy Recreation & Rehabilitation Center, where Lee is a client.

"We found him," Karin Jafee said, a friend of Lee's and an employee of Pomeroy. "When we tried to detain him, he bolted, but he is calmed down now."

Lee is now in the care of Pomeroy employees. He will undergo a health evaluation and is also getting some new clothes as it was payday for Pomeroy employees. Lee works at a Pomeroy-owned gift shop in Ghirardelli Square near Fisherman's Wharf.

Lee went missing Monday night (May 28) after being sent home after work in a Lyft carpool ride ordered by a Pomeroy employee. [End of update.]

The Castro district has been flooded with flyers for Brian Lee, a gay man who was reported missing.

Lee, 52, is developmentally disabled and was last seen the morning of May 31 at the St. Anthony Foundation, 150 Golden Gate Avenue by a staff member, according to Captain Chris Clements with the Pacifica Police Department.

"It's just a matter of an officer spotting him," Clements said.

Lee is 5 feet 11 inches, has blue eyes, is balding with gray hair, and speaks with a stutter.

Lee is a client at the Pomeroy Recreation & Rehabilitation Center and lives in Pacifica. After working at his job at a Pomeroy-owned gift shop Monday (May 28) in Ghirardelli Square at Fisherman's Wharf, Lee was ordered a Lyft carpool ride by a Pomeroy employee. About an hour later, the employee realized the Lyft ride had been canceled and never made it to Lee's home in Pacific at the C and Z Residential Care home.

The development director of Pomeroy, Esther Landau, said she believes Lee got off with another rider in the Lyft carpool who got off in the Castro district. Lee formerly lived in the Castro and has many friends in the neighborhood, said Landau.

"He went back stage and visited the girls," Jaffee said. "He's actually quite well known in the Castro."

He reportedly left the Midnight Sun around 9 p.m. Jaffee said after that, Lee possibly headed to Badlands with an unknown female, although Jaffee was not able to confirm this with any Badlands employees.

Midnight Sun employees are checking security footage. He was also possibly seen near South of Market, according to Jaffee, who believes Lee is staying in local shelters.

Lee's caretakers and friends have described him as friendly and kind-hearted.

"He gets along with everybody and is almost too friendly," said Cesar Herrera, owner of C and Z Residential Care, where Lee has lived for eight months. Lee previously lived in Daly City.

"I need him to come home safe so he can be the grand marshal at the Pomeroy Pride parade," Jaffee said.

Anyone with information is asked to call the San Francisco Police Department at (415) 822-8147.