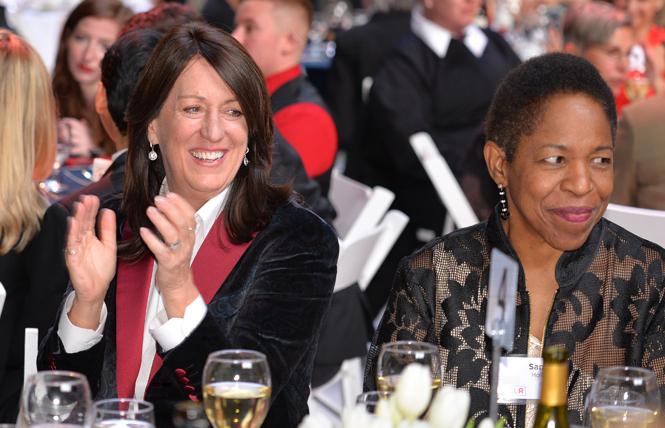 Kate Kendell, left, outgoing executive director of the National Center for Lesbian Rights, shared a moment with her wife, Sandy Holmes, at the agency's 41st annual gala May 19 at the Palace of Fine Arts in San Francisco. Photo: Jo-Lynn Otto

It all happened Saturday, May 19, at the National Center for Lesbian Rights' sold-out 41st annual gala and party at the Palace of Fine Arts in San Francisco

Gala attendees and other donors raised $1 million in honor of outgoing Executive Director Kate Kendell and the future of the LGBT legal advocacy organization.

A crowd of 1,000 attended the four-hour cocktail reception and dinner. Later in the evening, another 1,300 people came for the after-party, the organization announced in a news release May 21.

Kendell, 57, announced in March that she was stepping down after 22 years at the helm of the organization. She will leave NCLR at the end of the year.

Two years later she was the executive director, taking on cases ripped from the headlines, and leading the charge for same-sex marriage during her tenure.

Saying goodbye
In her reassuring way, Kendell comforted the crowd about her departure. In a rousing speech she reminded the organization's key donors how the community embraced her when she was new to San Francisco.

She recalled how the founding leaders of the organization, retired San Francisco Superior Court Judge Donna Hitchens and former San Francisco supervisor Roberta Achtenberg, supported her when she took the helm of the then-fledgling agency.

"It was really important for the good of the organization to do anything that I could to help Kate be successful. She had all of the right characteristics," said Hitchens. "There were times when she needed support or advice and both Roberta and I tried to be there for whenever that happened."

Kendell told the crowd that she hoped and expected the community to do the same for whoever will be selected to fill her shoes as the national search for her replacement is currently underway.

Like her predecessors, she added that she will be at the gala next year to support NCLR's new executive director.

"In this moment, of real threat and palpable peril, it's never been more important for you to know that you can count on the history, the experience, and the hard-won tireless commitment of this organization to navigate this moment and future moments," she said, crediting the NCLR's donors, board members, and staff. "It's not about me. It is about this organization, our DNA, and who we are and what we know. I'm not taking any of that with me. It is staying with this organization."

Kendell expressed hope and excitement for the future, talking about NCLR's Next Gen Movement, a campaign to bring new leaders into the LGBT movement. She challenged the new leaders and everyone to "aim higher" than her example of leadership, referencing a onesie created by NCLR staff reading, "When I grow up I want to be Kate Kendell."

Pointing to the new generation of community leaders like members of Black Lives Matter, the Parkland, Florida kids, and immigrant workers' advocates, she said future leaders don't look like her or have the years of experience she has under her belt, but they are "standing up, moving the levers of power, and making real change.

"They are standing up demanding justice, and they are not accepting no for an answer. They are saying, 'we will be in charge. We are not going to wait for you to come around to the right position, we are going to take charge,'" Kendell said to roaring applause. "That is how we move forward. I can't wait to see what these leaders do next. I can't wait to see what NCLR does next."

Honorees
This year's recipients of NCLR's Courage Award went to Naval Academy Midshipman Regan Kibby and University of New Haven freshman Dylan Kohere, who are plaintiffs in Doe v. Trump. The young transgender men took on President Donald Trump's transgender military ban with the help of NCLR legal director Shannon Minter - one of two transgender attorneys at the center of the fight to stop the Trump-Pence transgender military ban.

"LGBT people are in every community. Every issue is an LGBT issue. We cannot be bystanders. We are the ones that can make a difference," Kendell told attendees.

Hard to let go
For partygoers - LGBT and allies - Kendell simply got down to Jon Bon Jovi's "Living on a Prayer" and attempted to reassure them that NCLR will continue its work without her.
Not everyone was convinced.

Kimberley Skidmore, a lesbian who was attending the event for the fifth time, expressed surprise and concern about Kendell's departure.

"I don't know who is coming next," said Skidmore, stating that Kendell's work was "absolutely excellent."

"I wondered, 'Why is she leaving?'" she asked, speculating burnout or personal issues. "Nobody ever said."

Other party attendees were more optimistic about NCLR's future.

"She's done a lot for the community, and I owe respect to her because I was able to get married because of all of the hard work that she's done," said Lauren Inthanousay, who attended the party with her wife, Jenny Inthanousay.

"The next person that steps up we need to show her adequate respect," she continued. "I'm looking forward to it. I'm excited."

Sharon Smith, the plaintiff in the 2001 dog mauling case in which her partner, Diane Whipple, was killed, echoed one of Kendell's messages to the audience that everyone in the community had a part in the changes that occurred over the past quarter century.

"She's been a huge inspiration to all of us," said Smith, but, "everybody out in the room today is also a big part of the movement."

Gay state Senator Scott Wiener (D-San Francisco) praised Kendell as he presented her with a proclamation.

"I worship at the altar of Kate Kendell," he told the audience. "We have a lot of leaders in the LGBT community, but there is a tiny handful over time who ascend to a deity-like status and Kate is one of those people.

"Kate, you are such an inspiration. You have inspired a generation of leaders that our community really need," he continued from the podium. "We know you are going to continue to do great things."

Confidence
Community leaders spoke of their gratitude for Kendell's commitment and vision, while at the same time, they were confident in the organization's future.

"She's done such an amazing job bringing the organization to the forefront of fighting for LGBT rights," said Leslie Katz, a lesbian former supervisor and a shareholding attorney at Greenberg Traurig, LLP. "We all owe her a great deal of thanks.

"We have to keep the fight up," Katz said, hoping that the organization continues to "stay on the forefront leading the fight for human rights and civil rights."

"This is a critical time for all of us, and the fights that NCLR is leading and winning are crucial to our advancing equality for everyone," she said. "She's leaving it in great shape for the next generation to take leadership."

Minter praised Kendell in a phone interview May 21 from Washington, D.C.

"She's given us such a strong foundation and such a strong vision that I think we feel very confident moving forward," he said. "We are all very committed to honoring her legacy and her vision."

He also expressed that while the next person to take the helm of NCLR will be stepping into "some big shoes" they will also "get the benefit of an enormous reservoir of good will that she has built up and we have a very strong team at NCLR."

"In that way it will be a great job to step into," he added.

"I really have no doubt that NCLR will continue to be [a] successful [and] respected leader in the movement across the country," she said. "I am not the least bit worried."

Julie Dorf, senior adviser of the Council for Global Equality, expressed pride for Kendell's leadership as well as excitement for NCLR's future.

"It's a new era," said Dorf. "I really hope that we can find the next gen [leader] who is thinking about sexual rights and gender in a new way and who will take NCLR out of this era into the next that most of us in this room can't really imagine."