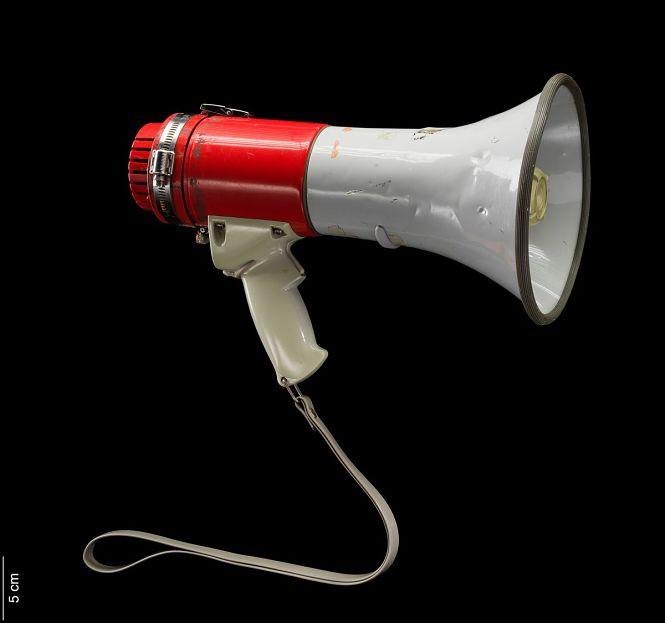 Just in time for Harvey Milk Day (May 22), the Smithsonian National Museum of Natural History has announced that the bullhorn used by slain gay supervisor Harvey Milk is now part of its new "Outbreak: Epidemics in a Connected World" exhibit.

Longtime gay activist Cleve Jones told the Bay Area Reporter Monday that he lent the bullhorn to the Smithsonian for the next three years. The bullhorn is included because Jones used it in numerous AIDS marches over the years.

Milk, of course, was the first openly gay person elected to office in California and San Francisco when he won a seat on the Board of Supervisors in 1977. Tragically, he and then-mayor George Moscone were assassinated by disgruntled ex-supervisor Dan White in November 1978.

"That bullhorn saw decades of marches and protests," Jones wrote in an email. "It was given to Harvey by Teamster organizer Allan Baird during the Coors Beer Boycott in the mid-70s. It was at the 'White Night Riot' in 1979, went to Washington, D.C. for all the big LGBT marches and AIDS Memorial Quilt displays, and was used in Gus Van Sant's film, 'Milk,' as well as the ABC miniseries, 'When We Rise.'"

Jones said that the bullhorn's home for many years was at the Harvey Milk Civil Rights Academy in the Castro and then the San Francisco GLBT History Museum.

"It will be on display in the Smithsonian for three years, then return to San Francisco," Jones said.

Harvey Milk Day is a day of special significance in California. The bill establishing the day was authored in 2009 by then-state Senator Mark Leno, a gay man who is now running for San Francisco mayor.

The "Outbreak" exhibit opened May 18, and coincides with the 100th anniversary of the 1918 influenza pandemic. The bullhorn is featured with Jones in the "Survivor" section of the exhibit, which includes text about Jones and his founding the Names Project AIDS Memorial Quilt.

"Jones used this bullhorn in candlelight vigils and marches in San Francisco in the 1980s, including the march where he got the inspiration for the AIDS memorial quilt," the exhibit's text reads. "The bullhorn was a gift from Jones' mentor, early gay rights activist Harvey Milk."

According to the museum, HIV/AIDS is featured as "the pandemic of our time," with the "Global Pandemics" section devoted to HIV/AIDS from the pre-1980s to the present, showing four decades of landmarks in science, activism, public health, and policy.

"By seeing the trauma and perseverance of survivors, we hope that visitors will leave 'Outbreak' with stronger feelings of connection and empowerment in the global fight against pandemic threats," the museum stated in a news release.