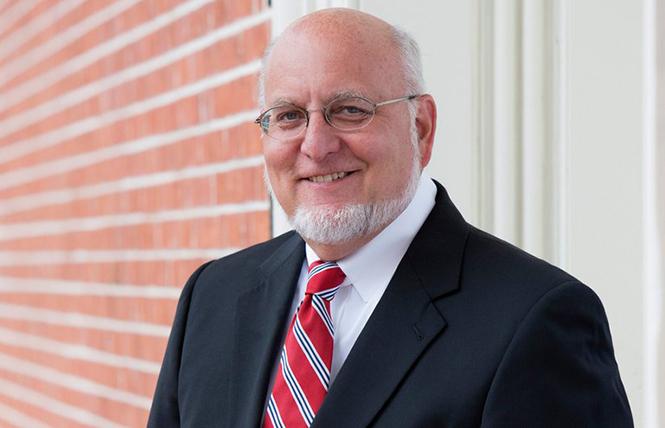 The Trump administration has appointed Dr. Robert Redfield, a longtime HIV/AIDS researcher and clinician, to head the Centers for Disease Control and Prevention.

The appointment, which does not require Senate confirmation, drew both applause and criticism from those familiar with Redfield's record, which includes charges of scientific misconduct and alliances with the religious right.

"Dr. Redfield has dedicated his entire life to promoting public health and providing compassionate care to his patients, and we are proud to welcome him as director of the world's premier epidemiological agency," Secretary of Health and Human Services Alex Azar said in a statement announcing the appointment.

Among the challenges Redfield will face as CDC head are the burgeoning opioid crisis, the emergence of new infectious diseases such as the Zika virus and Ebola virus, the growing threat of antibiotic resistance, and a global HIV epidemic that has improved in some areas while stalling or worsening in others.

"We hope that as an HIV researcher and clinician, Dr. Redfield will champion robust and sustained investments in both biomedical research and public health infrastructure," the Infectious Diseases Society of America said in a statement. "Leadership that recognizes public health threats and opportunities at a federal level to protect both patients and communities is more critical now than ever."

Decades of controversy
Redfield, 66, spent two decades in the U.S. Army Medical Corps and was founding director of the Department of Retroviral Research within the U.S. Military HIV Research Program. After retiring from the military he co-founded the University of Maryland Institute of Human Virology and served as chief of infectious diseases at the University of Maryland School of Medicine.

But this impressive resume is not without controversy.

While working at the Walter Reed Army Institute of Research in the early 1990s, Redfield was accused of misrepresenting evidence to make an investigational HIV vaccine appear more effective. An Army investigation - which some feel was incomplete - cleared Redfield of scientific misconduct but criticized his faulty data analysis.

Dr. Craig Hendrix, then an Air Force HIV researcher and now at Johns Hopkins University School of Medicine, was among the first to raise questions about the research.
"Either he was egregiously sloppy with data or it was fabricated," Hendrix told Kaiser Health News.

Redfield has ties to the religious right, including serving as a longtime board member of the Children's AIDS Fund International (formerly Americans for a Sound AIDS/HIV Policy), founded by Anita and Shepherd Smith, an organization that has received federal funding for faith-based and abstinence-only HIV prevention.

In the past, Redfield has supported mandatory HIV testing and reporting and promoted segregation of HIV-positive people in the military. He was among those who used the case of Kimberly Bergalis, who apparently contracted HIV from her dentist, to argue for HIV testing of health care providers. He has characterized condoms and needle exchange as "quick-fix strategies."

Advocates have asked Redfield to clarify whether he still holds these views.

"It is important for us activists to demand that [Redfield] publicly retract statements he has made in the past and resign from the board of Anita Smith's organization," Sean Strub, founder of the Sero Project, which fights HIV-related criminalization, told the Bay Area Reporter. "He also must explicitly distance himself from the anti-condom, anti-PrEP, homophobic, and other unacceptable positions she and her organization have promoted over the years."

Jesse Milan, president and CEO of AIDS United, told the New York Times that Redfield assured him he would support the group's goals, including needle exchange programs and PrEP, as well as "supporting health equity for the entire spectrum of marginalized and stigmatized people."

Experts who have known Redfield over the years say his experience working on HIV and the opioid crisis will be beneficial to the CDC.

"He is a good person and, in fact, as good as we are going to get from this administration," Dr. Carlos del Rio of Emory University and former chair of the HIV Medicine Association, told Infectious Disease News.

HIVMA is currently in the process of preparing a statement about Redfield's appointment, according to current chair Dr. Melanie Thompson of the AIDS Research Consortium of Atlanta.

"I've known Bob for decades. He's fully committed to working with HIV and, apart from an unfortunate issue of perhaps overly 'enthusiastic' interpretation of data from a very early vaccine trial, he has been otherwise a solid investigator," Volberding told the B.A.R.

"I do think he should be strong in HIV and in global health, and his military and government experience should allow him to come up to speed quickly," he added. "He's deeply religious, but I don't think it would be fair to criticize him for that as long as he does a good job and lets evidence guide his decisions."