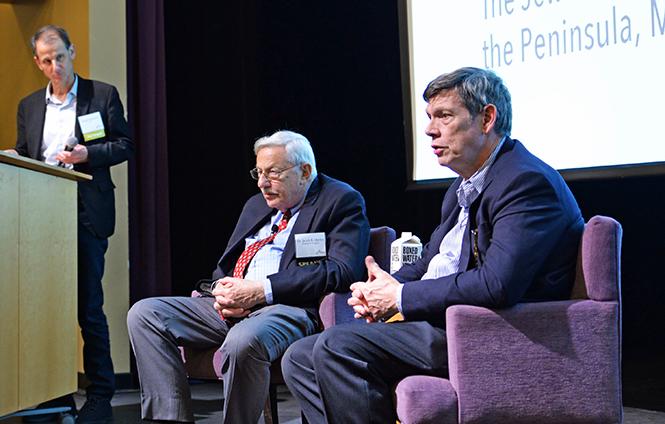 San Francisco Bay Area LGBT Jews were left with many questions following the release of a survey that examined the local Jewish community.

Mostly, those questions centered on the lack of information about trans and nonbinary Jewish people.

The results
The Bay Area is home to the fourth largest Jewish population in the U.S., with 350,000 Jews and 123,000 non-Jews living in 148,000 Jewish households throughout the greater Bay Area, the two researchers told the 550 audience members at both events.

The survey revealed only one-sixth of the Jews live in San Francisco and that, since 2004, a migration of Jews from the city to the East Bay has occurred with one-third of the population living in the East Bay and the same number of Jews living in the Peninsula and the South Bay.

It was no surprise to audience members that the survey results also revealed that Jews in the Bay Area are highly educated, more so than the average among Jewish communities across the nation. Women hold slightly more graduate degrees than men, according to the findings.

The survey also reported that the two largest segments of the Jewish population in the Bay Area were endcaps, young and older Jews.

It also confirmed the lack of Bay Area Jews being Jewishly engaged or having an interest in participating in Jewish events, far less than Jews in the rest of the U.S., researchers found.

The diversity of the community also wasn't surprising, particularly with a large number of households comprising of interfaith (42 percent among those 65 and older to a high of 66 percent among those 35 and under) and interracial (25 percent) where there is one person of a different ethnic community living in a house with a Jewish person.

LGBT Jews were included among the survey results, finding that one in 10 households overall, and one in five in San Francisco, specifically, include a lesbian, gay, or bisexual person.

Confirmation
The findings reflected what LGBT Jewish leaders who spoke with the Bay Area Reporter already knew anecdotally, but said it was nice to have confirmed numbers.

"The study is showing us one of the most diverse and complex communities we have here," said Arthur Slepian, 62, a old gay man who is the founder and board member of A Wider Bridge, an organization that connects U.S. and Israeli LGBT Jews.

"I think this survey gives added weight and support to the size and the needs of our community," continued Slepian, who also sits on the JCF board. "I'm hoping over time that the researchers will provide to us with even more light on the particular needs and issues of our community.

"This has already gotten the attention of the leaders of the community," he noted.

The initial results provided a glimpse into the Bay Area's LGBT Jewish community.

"I'm viewing this like a [movie] trailer or preview," said Ilana Kaufman, a 45-year-old lesbian who is the public affairs and civic engagement director in the East Bay at the Jewish Community Relations Council.

"It gave us a lot of information about like, what's important to different facets of the Jewish community, what their barriers are to engagement, and how to make some progress. In those ways the data was rich," she said.

More questions than answers
However, LGBT Jewish leaders were left with many questions about the data gathered about their segment of the Jewish community that wasn't reported.

One key piece of missing information was gender. The researchers told the two audiences that gender information hadn't been extracted from the data to be reported in time for the unveiling. That meant that information about the transgender and nonbinary gender community wasn't available at the initial report-backs about the survey's findings.

"I'm very curious about the transgender and nonbinary statistics because my gut is that we have a larger percentage here than anywhere else by far," said Rabbi Mychal Copeland of San Francisco's Congregation Sha'ar Zahav.

Copeland, 47 and a lesbian, hoped that the information will reveal the Jewish trans community and gain a deeper understanding by "really delving into what makes a community the most inclusive for trans people and what are the best practices across the board," she said.

When the B.A.R. pushed for more information about when data about the Jewish transgender community would be available, Jason Edelstein, principal of Edelstein Public Affairs, responded in an email that none of the respondents identified their gender as transgender, despite being offered the option.

"So, we have no identified transgender respondents, nor would we expect any in the probability sample of 644, as national research suggests about 0.5 percent of the population with considerable variability between studies," he wrote. "We did not ask about intersex status. At an incidence of 1 per 2,000 in the population, according to some studies, we would expect about two such respondents in our sample."

Copeland and Kaufman said that they wanted to know more about Jews of color as well as the LGBT community and engagement in the Jewish community.

"Partially, because of the LGBT nature of our community and our urban environment across the board, our community needs to do more to understand what it means to be a person of color in a largely white Jewish community," said Copeland.

The statistic that hit Copeland hard was the number of Jews who said being Jewish wasn't that important to them personally.

"That is the one that kind of hits me in the gut," said Copeland. "That's where our work is cut out for us," she said. Her congregation has worked hard for several years creatively engaging the mobile Jewish population while maintaining their relationship with the congregation and connecting with new congregants.

Her concern is that people don't see that being Jewish is a "beautiful vibrant part of their story to explore," she said.

Being Jewish and gathering Jewishly is not simply because Jewish people are a part of a tribe; that's never been the California way for Jews, unlike in other parts of the country.

Tribalism "doesn't ring very true here for Jews, so we have a unique lens that opens us up," said Copeland.

Inside the study
When the B.A.R. asked if anyone on the survey advisory committee identified as LGBT, Cohn said that he couldn't comprehend why that was necessary. Edelstein said that Jewish community leaders working on the survey didn't inquire about anyone's sexual orientation, noting that Aliya Saperstein, a demographer from Stanford University, an expert in gender and racial identities, worked in consultation on questions about gender and race.

The researchers will be able to extract information about the LGB Jewish community regarding mobility, marital status, interfaith and interracial relationships, employment status, seniors, youth, socioeconomic status, queer Jews of color, and other factors.

The initial report lumped married couples together under one single heading without distinguishing if they were opposite-sex or same-sex married Jews.

The researchers told those at the Palo Alto meeting that they plan to return to the data to extract more information about the various communities and return in six weeks to begin unpacking the results. However, the results will be limited to a broad stroke across the entire Bay Area rather than being able to analyze the needs and compare Jewish communities in each county due to the "limited sample size," researchers and Edelstein explained.

"We don't have the ability to analyze reliably on the county level. We are in the process now of looking at the data more deeply and planning for next steps with the community," wrote Edelstein.

When the B.A.R. asked about breaking down the information to focus on LGBT Jews living in individual counties to discover their needs, the researchers said that it was impossible to break it down to that level.

Methodology
The independent research team led by Cohen, Ukeles, and Ashley Grosse, Ph.D. at YouGov, along with an advisory committee of Bay Area Jewish leaders examined responses and conducted interviews with a sample set of respondents.

The survey is a product of a collaboration between the Bay Area's three Jewish community federations located in San Francisco (which covers the city all the way up through Sonoma and down to San Mateo counties), the East Bay, and Silicon Valley. The study cost $870,694, according to Edelstein, and was funded by the federations, along with Bay Area Jewish foundations and individual donors.

The Bay Area Jewish Community Digital Portrait Tool, which will allow Jewish communities throughout the Bay Area to access the survey data, will be released in the spring.

Cohen will return March 12 to report findings to the East Bay and then he will return in April for other meetings, according to Edelstein.

The San Francisco federation's professional team will also meet with community groups and professionals regarding the survey results, he added.