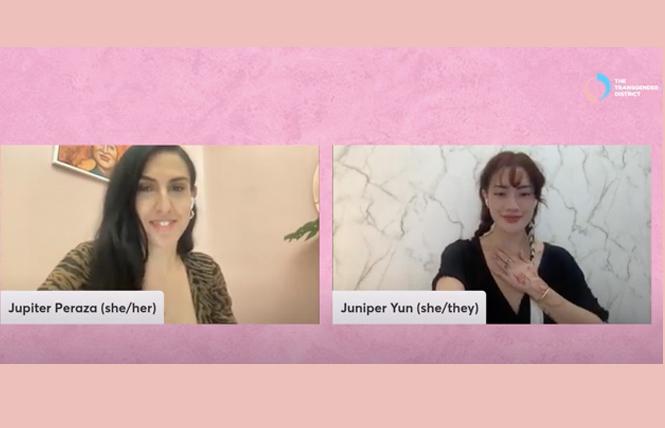 Jupiter Peraza, left, and Juniper Yun talked about future plans and past accomplishments of the Transgender District during a recent town hall. Photo: Screengrab

San Francisco's Transgender District is planning on expanding its services and programming in the new year, officials said at a virtual town hall to kick off 2022. It is also working on bringing in more trans- and queer-owned businesses to its area of the city's Tenderloin district.

Juniper Yun, the district's director of cultural affairs, said that under her supervision there will be more name and gender change clinics and services this year. A number of LGBTQ groups in the Bay Area have been offering such services due to California officials making it easier to update one's name and gender on state-issued IDs and the process more accessible to the trans community.

"We're so proud to announce we will be expanding those in 2022 to include not only name changes but programming that is robust and in partnership with many legal partners so we can do more types of documentation change-over, anything from passports to birth certificates, for those who are transgender or gender-nonconforming in the San Francisco Bay Area," Yun said during the January 26 online gathering.

Yun also said that the Tenderloin-anchored district is looking for a storefront for the Comfort Collective, a pop-up restaurant co-created by nonbinary chef Christian Washington.

"If you haven't heard of it, I'm surprised," Yun said. "They're the most inclusively exclusive, Southern comfort food in the East Bay. We are looking forward to a local partnership with Comfort to do a storefront in the district, as well as to continue their beautiful pop-ups with live music, and delicious, well-made soul food."

Washington, a former chef at Chez Panisse in Berkeley, did not respond to a request for comment.
Yun said that the entrepreneurship accelerator program for queer and transgender people of color, which started in 2020, will also be expanding. The next round is starting in March. The program offers free business tax filings, one-on-one coaching, the creation of a full suite and website, and seed grants.

A boot camp and classes will be offered in the next go-around.

The Fluid Cooperative, which serves coffee and food at 332 Golden Gate Avenue, had graduated from the last business incubator and opened in 2021, as the Bay Area Reporter previously reported.

Much of the town hall focused on the district's accomplishments in 2021. Jupiter Peraza, the district's director of social justice, touted the Housing Opportunities for Trans Tenants, or HOTT, program, which has secured housing for eight trans, nonbinary, gender-nonconforming or intersex people in their 20s and 30s.

"We had eight available slots — eight vacancies we offered to trans tenants residing in the San Francisco Bay Area — and out of those vacancies, we were able to fill all of them," Peraza said.

Yun noted that all of the tenants identify as Black, Indigenous, or otherwise of color. Three were housed in North Beach, two in the Mission Dolores neighborhood, one by Alamo Square Park, and one in downtown Oakland.

"The beauty of this program is we were able to have an opportunity to create a stipend so folks could be in a place that felt affirming — in a place that is a step above what could be traditional housing methods and opportunities for trans folks," Yun said.

"As we phase out HOTT, it's so important for us to take away everything we learned from HOTT," Peraza said.

The district is advised in its work by a community advisory council, according to Ivory Smith, a program associate with the district.

"The CAC is a small group of trans, nonbinary folk and stakeholders," Smith said. "The CAC helps out with so many things at the district."

Smith said that the CAC, whose members receive a $150 stipend for their work, advises the district on much of its work.

"For all the events we put together at the Transgender District we always consult with the CAC to see if the direction the district is heading is one where they feel supported and empowered by," Smith said.

These events included the Riot Party — commemorating the anniversary of the 1966 Compton's Cafeteria Riot — and the Transgender Day of Remembrance.

The district also facilitated several discussions on the state of transgender visibilities. In 2021, there was one forum on politics and another on entertainment.

Peraza encouraged anyone who hasn't seen the forums to find them on the district's YouTube channe.

Yun talked town hall viewers through the district's biennial report, which is also available online. Each cultural district must pen a cultural history, housing, and economic sustainability strategies, or CHESS, report to present to city officials.

The report, sponsored by and written in collaboration with the Mayor's Office of Housing and Community Development, outlines the district's efforts with workforce and entrepreneurship development, housing, and features interview answers from community members on the district's actions.

Peraza encouraged folks to get actively involved in their communities.

"I'm always an advocate for individuals to get involved in whatever it is they're passionate about, but especially for the trans community," Peraza said. "Our community has so much power and innovative thinking. We must share that with the world."

There was not a question-and-answer period during the town hall.