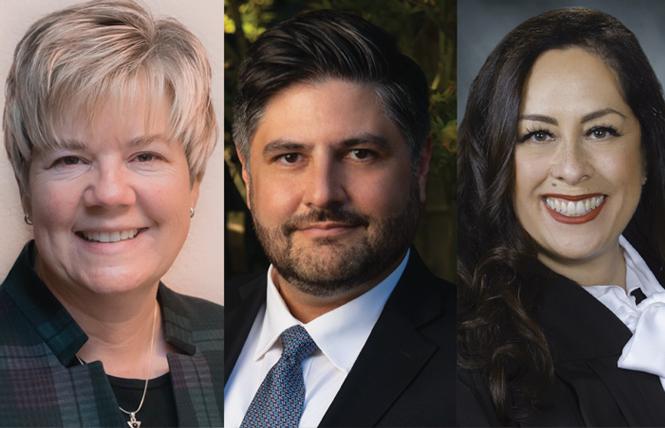 Three LGBTQ judges on the Santa Clara County Superior Court will participate in a panel discussion presented by History San José and the BAYMEC Community Foundation Saturday, February 12, from 1 to 2:30 p.m. at History Park, 635 Phelan Avenue in San Jose.

The judges will discuss their lives and careers, and it marks the first time that out South Bay judges have come together to take part in such an event, organizers said.

Former Governor Arnold Schwarzenegger appointed Judge Julie Emede, a lesbian, to the bench in 2010. She received her law degree from UC Hastings College of the Law and practiced family law for her own firm prior to her appointment. Emede and her partner, Marci Garcia, have been together for 31 years and married in October 2008, just before Proposition 8, the same-sex marriage ban, was passed by California voters.

Judge Charles Adams, a gay man, was appointed to the bench by former Governor Jerry Brown in 2018. He received his law degree from Pepperdine University. He served as a research attorney for the Santa Clara County Superior Court and worked as a staff member for a U.S. district court judge prior to his appointment. He came out when he checked the box identifying himself as a member of the LGBTQ community when he applied to be a judge, according to a biography on the Queer Silicon Valley website.

The newest out judge is Jessica Delgado, who was appointed by Governor Gavin Newsom in 2021. A Latina lesbian, Delgado received her law degree from UC Berkeley Law. Delgado was a deputy public defender for the Santa Clara County Public Defender's office prior to her appointment.

Joining the panel will be moderator Mary Greenwood, a justice with the California 6th District Court of Appeal.

For more information about the three judges, click here.

Jewish groups to host AD 17 forum
The Raoul Wallenberg Jewish Democratic Club and a coalition of community groups will hold a virtual candidate forum for the special Assembly District 17 race Monday, February 7, from 6:30 to 8 p.m.

According to an email from organizers, the forum is an opportunity to hear from the candidates on issues important to the Jewish community. These include rising anti-Semitism and racism, ethnic studies, and Holocaust education.

An email announcement from Executive Director Dana Van Gorder stated that Miguel Ruelas and Sid Hartman, longtime supporters of the center, recently agreed to donate $25,000 if the center can match that gift with an equal amount of contributions.

"This challenge helps us to meet an incredibly important need — to expand our multilingual mental health services for members of Marin's LGBTQ+ community," Van Gorder wrote.

He noted that the demand for such services as individual therapy and support groups has increased sharply as community outreach by the center has grown in recent years.

"It is essential that we address this gap," he wrote.

The terms of the challenge grant call for donations of $12,500 this year and again in 2023 from people who have never given to the Spahr Center, or who have not given in recent years. Van Gorder noted that three new donors have already contributed $4,000 toward the challenge.

New journal to spotlight queer, trans religious studies
UC Riverside will be the host of an unprecedented conference to launch the first academic journal devoted to queer and transgender scholarship in religious studies.

According to a news release, the journal, QTR: A Journal of Queer and Transgender Studies in Religion, will be founded by Melissa M. Wilcox, a religious studies professor at UC Riverside, and Joseph Marchal, a religious studies professor at Ball State University in Indiana. The first papers published in the journal will be selected from presentations at the conference in May. The conference, "Queer and Transgender Studies in Religion in the 2020s: The State of the Field" is supported by a $30,000 grant from the Henry Luce Foundation and a $5,000 grant from the UC Humanities Research Institute.

Wilcox, who is queer, stated that the need for the journal is clear.

"Every time we write for a mainstream journal we have to do either queer theory or religious studies 101 to explain our theoretical background," Wilcox stated. "There's no go-to journal if you want to read this specific field of work. There's no place those of us who do queer and trans studies can talk directly to each other. This journal will be that place."

QTR will use a fee-free open access publishing model to make its scholarship available to the widest possible academic and public audience. Under most open access models, the authors of a paper must pay the journal to make the paper freely available to any reader, the release stated. Typically the fees range from $2,000-$3,000.

"Many scholars in these areas of research are working with little to no grant money," Wilcox stated. "Some are working outside academia. Fee-free open access will help these scholars as well."

Papers published in QTR will address, among other things, the way queer and trans people are creating their own religious spaces, the release stated.

"When we say a particular religion hates queer people we're erasing the queer people in that religion," stated Wilcox. "We're reducing it to one particular take or one particular branch and to a certain set of elites who have claimed the right to say what they want by silencing everyone else."

Wilcox and Marchal believe the journal will help those struggling with the relationships between gender, sexuality, and spirituality.

"This work saves lives. It simply does," Wilcox stated. "Anybody just Googling to find out who is out there like me or is there space for me in this religion will be able to find the work collected in this journal.

For more on the journal, see the UCR article.

In an email, Jeffrey Buckner, acting associate commissioner for the SSA's Office of Strategic and Digital Communication, stated that people can provide comments in advance of the meeting about the challenges the LGBTQIA+ community faces. People can provide their comments through Engage SSA until Friday, February 4.