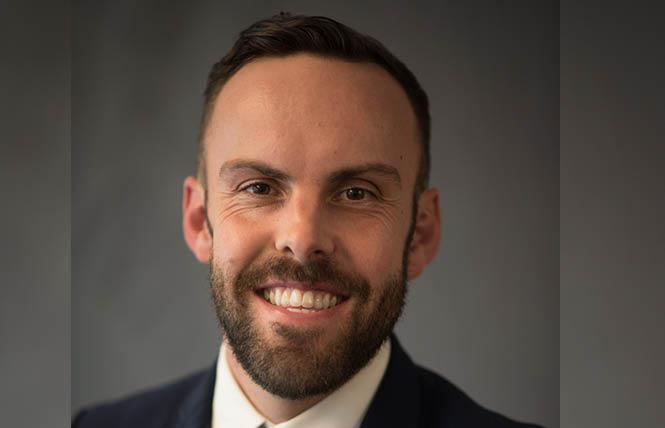 After five years as a City College of San Francisco trustee, Tom Temprano is resigning to become the new political director at Equality California. He is also departing the staff of gay San Francisco Supervisor Rafael Mandelman, having served nearly four years as his de facto chief of staff.

Temprano, a gay man, last Thursday stepped down as vice president of the elected community college board. His resignations from the oversight body and his job as a legislative aide at City Hall take effect February 15.

He is one of two new hires the statewide LGBTQ advocacy organization announced Tuesday. Jorge Reyes Salinas, who is also gay, is joining EQCA as its new communications director; he has been serving in a similar role for state Senator Monique Limón (D-Santa Barbara).

Temprano will be based in San Francisco, giving EQCA a presence once again in the city following the departure in November of Josh Strickney, its deputy communications director. In an exclusive interview with the Bay Area Reporter a day prior to the announcement, Temprano said he made the decision to seek the new position because "it is a dream job" he couldn't pass up.

"I spent my entire adult life, and dating back to high school in Ventura County, focusing on LGBTQ civil rights ... and electing LGBTQ people to office in California," said Temprano, 35, a former president of the city's Harvey Milk LGBTQ Democratic Club. "To do that with an organization with as much reach and importance as Equality California feels like the culmination of a lifetime's work of activism and political work."

EQCA hopes to bring onboard several more people based out of San Francisco. It is hiring for several development positions and a director of national campaigns to oversee its advocacy on such federal issues as modernizing HIV laws and advancing transgender rights.

As for hiring Temprano and Salinas, EQCA Executive Director Tony Hoang stated the organization is "excited" to have them join its "team as we gear up for an historic election and continue our fight for full, lived LGBTQ+ equality.

"Jorge is an effective communicator and experienced member of the Capitol community who will strengthen our ability to educate, engage and mobilize the LGBTQ+ community in both English and Spanish," added Hoang. "Tom brings a diverse background in politics - as a candidate, an elected official and a strategist - and is the perfect person to lead our community through this critical election cycle."

Mandelman is now looking to hire a fourth aide in his office. Last year, he brought on Jackie Thornhill, a transgender woman, and Jackie Prager, the queer former director of the San Francisco Democratic Party, as legislative aides in addition to Jacob Bintliff, a gay former city planning staffer.

"It is definitely a loss for the office, but I am happy for him," Mandelman told the B.A.R.

He noted that Temprano was a full-time volunteer on his campaign for the District 8 supervisor seat in the special election in June 2018 and has worked alongside him since he took his oath of office that July.

"I think this job of being a legislative aide in San Francisco in 2022 is a meat grinder," said Mandelman. "He has done it for almost four years. I am incredibly grateful for what he has done for me and District 8."

Mayor London Breed will need to name someone to fill the vacancy on the college board. The person is expected to seek election on the November ballot to serve out Temprano's term through early January 2025.

"I would love to see a queer person replace me on the board," said Temprano, one of two out college trustees.

City College work
Even prior to his joining the college board in 2017, Temprano had fought to save its accreditation as a leader of the Milk club. Over the past five years he and his fellow board members have weathered fiscal storms and leadership turnover at the college as they dealt with budget deficits and enrollment declines brought on by the COVID-19 pandemic.

Temprano pointed to securing funding for staffing at the campus' queer student center, updating its policies to better meet the needs of trans students, and advocating for state policy to end the deadnaming of trans and nonbinary public college students as among the highlights of his tenure. The passage of an $845 million bond for City College and securing $200 million to fund its free tuition program provide a strong foundation for its future, he added.

"I think I have done a good job," said Temprano. "I think the board has done some really important things during my time."

Having moved into the LGBTQ Castro district in 2020, Temprano has long been seen as a likely successor to Mandelman, who will be termed out in 2026 should he be reelected this year. In his new role with EQCA, Temprano will help oversee its political action committee, which endorses candidates across California.

His responsibilities will run the gamut from its endorsement process and financial support of candidates to civic engagement activities and LGBTQ voter registration drives. Thus, it will likely greatly benefit Temprano should he seek higher office someday, affording him connections to political leaders throughout the Golden State.

It will be a handy contact list that could be fruitful for his own campaign coffers. Temprano demurred, slightly, when asked by the B.A.R. about the benefits the new job could bring to any future candidacy of his.

"I think right now, in particular with the aftermath of January 6 and the midterms that are coming and the opportunity to pick up a number of legislative seats," said Temprano, "to have a position, to have a real impact on the future of our democracy and sort of makeup of our state Legislature and help elect other queer people to community college boards, school boards and city councils around the state, is truly an incredible opportunity and one I couldn't pass up."

Having gotten to know "many amazing neighborhood leaders and nonprofit leaders in District 8," Temprano said, "if an opportunity to serve them again comes up, it is one I certainly would consider."

Temprano lives with his partner of more than six years, Andrew Sheets, a spokesman for the LGBTQ film festival Frameline, and Val, the Chihuahua, rat terrier, Australian cattle dog mix they got from Rocket Dog Rescue four years ago. He told the B.A.R. they have no plans to leave the Castro, while he is looking forward to now being a constituent of Mandelman's.

"We will stay active District 8 residents," said Temprano. "I have saved up some tree trimming and sidewalk repair requests as soon as I leave; I am not joking."