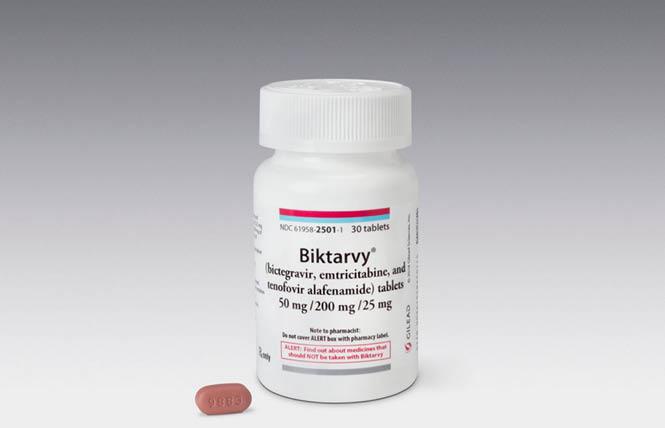 Gilead alleges in a lawsuit that almost 100,000 bottles of its HIV medications have been faked or tampered with over the last two years. Photo: Courtesy Gilead

Gilead Sciences Inc. announced that almost 100,000 bottles of its HIV medications had been faked or tampered with over the past two years.

According to a lawsuit unsealed by a federal judge in the Eastern District of New York January 19 — but which had been filed over the summer — Gilead, which is based in Foster City, first became aware of counterfeit versions of its drugs Biktarvy and Descovy in August 2020. At that time, a customer of a pharmacy in Brawley, California (Imperial County) turned in a bottle that was purported to be Biktarvy but was, in fact, Tylenol, according to the pharmacist, who was interviewed by the Wall Street Journal.

Gilead made an announcement in August letting the public know that it had "become aware of tampered and counterfeit versions" of Biktarvy and Descovy. Biktarvy is a once-a-day antiretroviral for the treatment of HIV infection. Descovy is used both as HIV treatment in combination with other antiretrovirals and as pre-exposure prophylaxis (PrEP) to prevent HIV infection in people exposed to the virus.

So far some 85,247 counterfeit bottles — totaling over $250 million worth in medications — have been seized from 17 locations across nine states.

According to the Journal, a Gilead spokesman said the company "has uncovered and stopped a complex and criminal enterprise distributing counterfeit Gilead HIV medication through the legitimate U.S. supply chain."

The counterfeit pills included both fake pills and real medications with altered packaging. One counterfeit was an antipsychotic drug in doses six times the FDA recommendations, according to the suit. One patient who thought he was taking Biktarvy reported being rendered immobile and unable to speak, according to the complaint.

The company uses the word "counterfeit" to include genuine medications that have faked documentation or altered packaging, as well as fake pills, the Journal article stated.

The counterfeiters used real bottles that used to contain Biktarvy or Descovy, but substituted fake tablets then resealed the bottles, Gilead stated.

The lawsuit filed over the summer is against 22 defendants Gilead is accusing of operating as "an expansive, criminal counterfeiting network." The suit was filed under seal so as to not alert the defendants while Gilead worked with federal and local law enforcement to seize the counterfeit medications.

Chad Ngo, spokesperson for the San Francisco AIDS Foundation, said that it did not receive counterfeit drugs associated with this case.

"I checked with our clinical staff and we have not had cases of clients coming to us with this concern or being a victim of the counterfeiting," Ngo stated.

The Lanham Act, a federal trademark law, allows plaintiffs such as Gilead to execute seizures and litigate under seal with the permission of a judge. A judge unsealed the case, with Gilead's acquiescence, January 19.

"The safety of individuals taking Gilead medication is always our first priority," Gilead Chief Medical Officer Dr. Merdad Parsey stated in a news release. "We are taking aggressive action to ensure that healthcare providers and people who rely on our medicines can confidently distinguish authentic Gilead products from counterfeit drugs."

In the same release, Gilead published a checklist so that folks can ensure that they are taking actual pills of Biktarvy or Descovy.

New Jersey law firm Frier Levitt, LLC, which is representing defendant Safe Chain Solutions, LLC, did not respond to a request for comment.

Gilead urges anyone who believes they were given a counterfeit or tampered with medication to call their doctor, pharmacy, and Gilead Product Quality Complaints at 1-800-445-3235, or to email them at QualityComplaints@gilead.com

Anyone experiencing side effects is advised contact their health providers and to report it to the FDA's MedWatch Safety Information and Adverse Event Reporting Program (1-800-FDA-1088 or www.fda.gov/medwatch) or Gilead (1-800-445-3235, Option No. 3).

This is the last LGBTQ Agenda column by John Ferrannini, who is departing the Bay Area Reporter. Look for the column to resume under a new author soon.