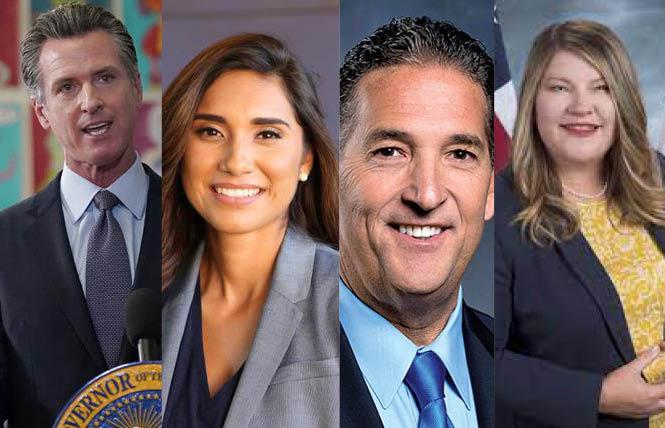 Due to their not casting votes in favor of various LGBTQ rights bills, 22 Democratic lawmakers failed to receive a perfect score on the 2021 legislative scorecard compiled by a statewide LGBTQ advocacy organization. Governor Gavin Newsom was also dinged on the scorecard for his veto last fall of a substance use treatment bill.

Equality California is releasing its annual scorecard Monday (January 31). It shared a copy of it with the Bay Area Reporter last week ahead of its publication.

Despite the less-than-stellar results on the scorecard for the governor and roughly a third of the Democratic legislative caucus, "great progress" was still made last year on advancing LGBTQ legislation in California, noted EQCA Executive Director Tony Hoang.

"While states across the nation pursued and passed policies attacking the transgender community, the California Legislature invested in the health and well-being of trans and gender-nonconforming people and adopted legislation to better respect and affirm Californians' gender identities," wrote Hoang in his introductory remarks for the scorecard.

The 2021 scores for the Democrats are an improvement from 2020, when 33 members of the party's legislative caucus fell short of 100% scores. It marked the highest number of Democratic legislators falling below a 100% score since 2006, when 22 Democrats in the statehouse earned less than perfect scores from EQCA.

Despite vetoing an LGBTQ bill two years ago, Newsom still received a perfect score on the 2020 scorecard because EQCA and LGBTQ lawmakers had asked him not to sign the legislation into law after a last minute issue was discovered with it. He noted the matter in his veto message for the bill and pledged to work with lawmakers to address the problem.

As promised Newsom last year signed into law the revised version of the bill, Assembly Bill 218. Authored by gay Assemblymember Chris Ward (D-San Diego), it allows transgender Californians to update their marriage certificates and the birth certificates of their children to accurately reflect their legal name and gender. It was one of eight bills sent to Newsom's desk in 2021 that EQCA scored him on.

But his veto in October of Senate Bill 110, authored by gay state Senator Scott Wiener (D-San Francisco), resulted in Newsom receiving a score of 88% in his third year as governor. He had received 100% scores from EQCA during both of his first two years in office.

Wiener's legislation would have expressly legalized contingency management as a way to treat substance use disorder and authorized Medi-Cal to cover it. Incentives, including financial inducements, are used to help people remain sober.

The Veterans Affairs Administration and the San Francisco AIDS Foundation already utilize such measures, as the B.A.R. noted in its coverage of the bill. Wiener had argued the management strategy has been shown to be an effective with methamphetamine users.

But in his veto message Newsom called the bill "premature" since the state is conducting a pilot project on contingency management with funding through Medi-Cal this year through March 2024.

"The outcomes and lessons learned from the pilot project should be evaluated before permanently extending the Medi-Cal benefit," argued Newsom for why he did not sign the bill.

Wiener did not respond to an interview request for this article by deadline Friday, January 28. He was among the seven of the eight members of the Legislative LGBTQ Caucus to earn a 100% score from EQCA in 2021.

Dem lawmakers dinged
For the second year in a row lesbian Assemblywoman Sabrina Cervantes (D-Corona), who is up for reelection, fell short on EQCA's scorecard. She received a 2021 score of 90%, a slight improvement from her 2020 score of 86%.

She was among those lawmakers dinged by EQCA for abstaining on the vote for Wiener's SB 357, which would decriminalize loitering for adults with the intent to engage in sex work. While it passed out of the Legislature, the bill as of Friday had yet to be sent to Newsom for him to either sign or veto.

As the B.A.R. previously reported, Wiener stated in October that it'd be sent to Newsom in January. The deadline for him to do so is August 31, but in a texted response this month, Wiener said he would transmit the bill "well before" that date.

"I don't know the precise date when we'll send the bill to the Governor, but we'll do it at some point in the next few months," stated Wiener.

EQCA spokesperson Samuel Garrett-Pate told the B.A.R. last week the organization was unsure when the bill would be sent to Newsom. Should the governor end up vetoing it, his score on the organization's 2022 Legislative Scorecard would be impacted.

"Throughout his career Governor Newsom has been a champion and ally for the LGBTQ+ community, and we are certainly hopeful he will sign this important legislation to address profiling of the trans community and women of color in particular," said Garrett-Pate.

Senators Bob Hertzberg (D-Van Nuys) and Thomas J. Umberg (D-Santa Ana) received 89% scores from EQCA for abstaining on SB 357. Their scores differed from their colleagues in the lower chamber because EQCA scored senators on nine bills versus the 10 used to tally scores for assemblymembers.

Senator Dr. Richard Pan (D-Sacramento) received a score of 89% for abstaining on AB 465. Authored by Nazarian, it requires professional fiduciaries to receive LGBTQ+ cultural competency and sensitivity training during their education and licensing process.

Assemblymembers Tom Daly (D-Anaheim) and James C. Ramos (D-Highland) received scores of 80% for their no votes on SB 357 and for abstaining on AB 1041. Authored by Assemblywoman Buffy Wicks (D-Oakland), the bill aimed to expand the definition of "family member" for purposes of family and sick leave to cover LGBTQ people's chosen family members other than a spouse or blood relative.

But Wicks, among the 70 Democrats who scored 100% on EQCA's 2021 scorecard, shelved the legislation after it passed out of the Assembly. The Senate will take up the bill in the coming months.

Due to abstaining on both AB 1041 and SB 357 Assemblymember Tasha Boerner Horvath (D-Encinitas) received 80%, while her colleagues Patrick O'Donnell (D-Long Beach) and Sharon Quirk-Silva (D-Fullerton) received scores of 78%. The difference in the trio's scores is due to the latter two only being scored on nine bills due to being excused for missing the vote on SB 258.

Authored by gay state Senator John Laird (D-Santa Cruz), SB 258 specifies that older people with HIV are to be part of the population of "greatest social need" when it comes to programs and services administered by the California Department of Aging.

Having abstained from the votes on SB 110 and AB 1041 is among the reasons why former assemblymember Jim Frazier of Discovery Bay received the lowest score, 56%, among the Democratic legislators last year. He resigned this month from his 11th Assembly District seat that straddles Solano and Contra Costa counties to seek work in the private transportation sector.

Frazier also lost points for voting no on SB 357 and abstaining from AB 245. Authored by former assemblyman David Chiu (D-San Francisco), the law prohibits public universities from deadnaming trans and nonbinary students on their academic records and diplomas.

Due to being excused for missing the vote on AB 218, Frazier was only scored on nine of the 10 bills EQCA used for assemblymembers.

Endorsement considerations
Those lawmakers seeking reelection in 2022 who didn't receive 100% on EQCA's scorecards for the previous two years must now seek its endorsement ahead of the June primary. Only legislators who receive perfect scores in the two preceding years of their election are automatically endorsed by EQCA.

It is set to release its pro forma endorsements of the incumbents who qualify as early as Wednesday. Among them should be Assembly Speaker Anthony Rendon (D-Los Angeles) since he earned 100% on both the 2021 and 2020 EQCA scorecards.

Rendon angered LGBTQ leaders in the fall when he demoted gay Assemblymember Evan Low (D-Campbell) from his committee chairmanship. EQCA said it was "deeply disappointed" by the move, as the B.A.R. reported at the time.

He further raised eyebrows among LGBTQ political circles this month by dual endorsing gay California Insurance Commissioner Ricardo Lara (D) and one of his opponents as he seeks reelection this year, Assemblyman Marc Levine (D-Greenbrae). In December, EQCA was among a number of groups that pledged to raise and spend at least $3 million supporting Lara's campaign.

Nonetheless, Rendon voting across-the-board for EQCA's top legislative priorities the last two years means he qualifies for having the LGBTQ group's support of his reelection bid this year. He is seeking his final two-year term, as Rendon will be termed out of the Legislature in 2024.

The full EQCA 2021 Legislative Scorecard can be downloaded at its website.

Web Extra: For more queer political news, be sure to check http://www.ebar.com Monday mornings for Political Notes, the notebook's online companion. This week's column reported on endorsements of out California candidates by EQCA and the LGBTQ Victory Fund.