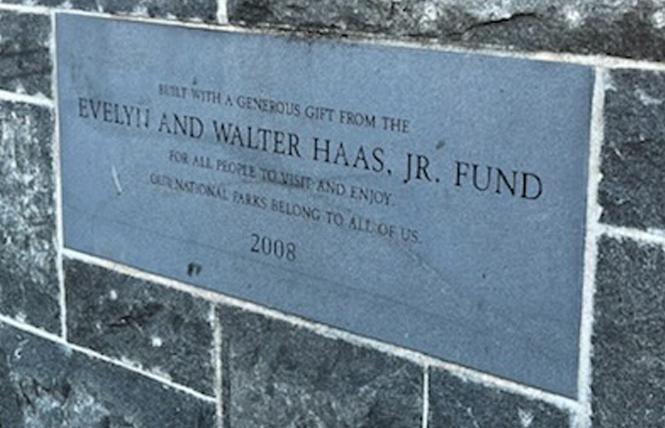 The Evelyn and Walter Haas Jr. Fund, which is based in San Francisco, will end its LGBT grant program in 2023, officials announced January 28. Photo: Matthew S. Bajko

A major San Francisco-based foundation that has supported marriage equality, LGBTQ faith-based work, and legal organizations for more than two decades has announced that it will end its grants to queer nonprofits in 2023, likely leaving many of them scrambling to replace the revenue.

The Evelyn and Walter Haas Jr. Fund stated January 28 that it is commencing a "two-year wind-down" of its investments in LGBTQ equality. It began its LGBTQ program 21 years ago, according to a letter.

"Recognizing the challenges in achieving nationwide federal protections, and citing a new wave of anti-transgender laws in the states, Cathy and Robert acknowledged that the LGBT movement's work is far from over," a news release states, referring to Haas Jr. Fund President and CEO Cathy Cha and Vice President of Programs Robert Joseph. "In the coming two years, the fund will be providing its LGBT grantees with the transitional support they need to prepare for the next chapter in their work. This will include unrestricted general operating support and capacity-building support for fundraising."

"We will be providing the same level of support to current LGBT grantee partners in 2022 as we did in 2021, with all grants as unrestricted general operating support," Sadiq stated. "In the months ahead, we will be talking with grantees about the kinds of capacity-building support that can help them most in their continuing work. Based on those conversations, we will make our final grants in 2023 for organizational and movement-wide capacity-building. We have budgeted approximately $1 million for this capacity-building work."

Sadiq told the B.A.R. that the Haas Jr. fund is shifting its focus "to be more rooted in our home state of California." When asked why this won't include funding LGBTQ equality efforts in California, Sadiq stated, "We are a policy and outcomes oriented foundation and California already has by far the strongest pro-LGBT laws in the nation."

The fund has invested a total of $105 million over the years in its LGBTQ program, Sadiq stated.

Matt Foreman, gay man who's a senior program director with the fund and oversees its work on LGBTQ and immigrant rights, referred the B.A.R. to Sadiq. He did not answer a question asking if he's planning to stay with the fund.

Roger Doughty, a gay man who is president of Horizons Foundation, a San Francisco-based philanthropic organization that also makes grants to LGBTQ nonprofits, said the news is a "disappointment, to be sure."

"At the same time, the Haas Jr. Fund has made a remarkable and lasting difference in its two decades of funding the LGBTQ movement," Doughty stated to the B.A.R. "They've been consistently smart, strategic, willing to take risks, and genuinely connected with the queer nonprofits they supported. If more foundations did even a fraction of what Haas, Jr. has done, it would bring dramatic additional resources to our community in the Bay Area and the movement across the country."

Doughty said over the last decade, overall philanthropic support for LGBTQ rights has risen, and hopefully this will offset the loss of the fund.

"The bad news is that the exit of any major funder is a loss, since funding for everything from LGBTQ legal equality to LGBTQ health care, from support for LGBTQ elders to empowering queer youth — and so much more — remains terribly underfunded. This is nowhere more true than LGBTQ organizations in communities of color and the transgender community," Doughty stated.

"The more positive news is that overall foundation support for LGBTQ nonprofits and causes has been climbing steadily over the past 10 years. According to Funders for LGBTQ Issues' most recent Tracking Report, total foundation and corporate funding has topped $200,000,000 (annual)," Doughty added. "That's a healthy increase and an indication that, slowly but steadily, more foundations are making LGBTQ-related grants. Newer funders have entered the field in recent years (e.g., Foundation for a Just Society), while others have increased their commitments. It remains far, far from enough, but is a positive trend."

Funders for LGBTQ Issues did not respond to a request for comment. The Haas Jr. Fund is among the philanthropic umbrella group's roughly six-dozen institutional members.

San Francisco-based National Center for Lesbian Rights is just one of numerous queer nonprofits that have received grants from the Haas Jr. fund. Imani Rupert-Gordon, its executive director, thanked the fund for its support over the years.

"The Evelyn and Walter Haas Jr. Fund has been an incredible partner and generous funder of NCLR's work since 1999," Rupert-Gordon stated to the B.A.R. "We are incredibly grateful for the funding they have provided through the years that has allowed NCLR to provide legal aid and direct services to the most underserved LGBTQ folks in our community. Their leadership, forward thinking, and intentional grantmaking has been instrumental in the coordination of our movement, resulting in enormous victories for the LGBTQ community for over 20 years.

"As they wind down their LGBTQ program, we look forward to continuing to find ways to partner with the [fund] on issues that affect the most underrepresented in our communities," Rupert-Gordon added.

Sadiq sought to assure the B.A.R. that "we will not be funding LGBT equality work directly beyond 2023 but our commitment to justice, equality, and opportunity for LGBT people will continue across our other issue areas of democracy, immigrant rights, and college access."

"To see so many people's lives — and their rights and opportunities — change in consequential and material ways is a testament to the power of visionary leadership and grassroots-fueled movements for equality and justice," Cha and Joseph wrote in a joint statement. "For Haas Jr., it has been a privilege to work alongside the people and organizations that have changed hearts and minds and led the way on these issues."

Updated, 1/28/22: This article has been updated with why the Haas Jr. fund is ending its LGBTQ grant program.