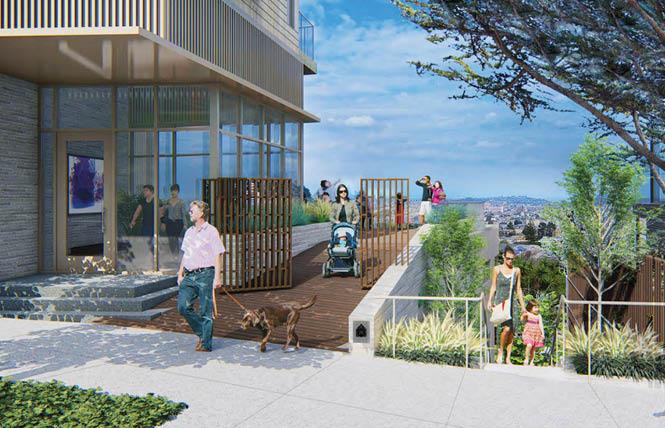 In this rendering, a pedestrian viewing deck is part of the plan for the Diamond Street housing project that received a positive recommendation from the San Francisco Planning Department. Photo: Courtesy On Diamond LLC

A controversial market-rate housing project proposed for a Diamond Heights hillside has secured a recommendation for approval from the San Francisco Planning Department. The city's planning commission is set to vote on the development at its meeting Thursday.

Initially set to take place last summer, the hearing had been delayed for months as the developer of the project tried to broker a deal with neighborhood leaders who had objected to the all market-rate family housing set to be built at the intersection of Diamond Heights Boulevard and Diamond Street. They reached a deal in early January, as the Bay Area Reporter was first to report, allowing for the project to be heard at the commission's February 3 meeting.

In her report recommending approval for the project, planner Gabriela Pantoja noted that the new residences will be near public transportation, commercial corridors, and jobs. She also noted it will be built "on a suitable development lot" while contributing funds for the city to build affordable housing at a different site.

It comes as gay District 8 Supervisor Rafael Mandelman is aiming to restrict development of "monster homes" throughout his centrally-located district. He is seeking adoption of an ordinance that would hinder property owners' ability to replace smaller, older homes with single-unit residences totaling more than 4,000 square feet. ?

To be taken up by the Board of Supervisors in February, his proposal for a Central Neighborhoods Large Residence Special Use District would cover Glen Park, Noe Valley, Dolores Heights, Mission Dolores, Diamond Heights, Twin Peaks, and Eureka Valley. It would apply to any projects filed after January 1 of this year. ?

It plans to construct 10 duplexes and four single-family residences for a total of 24 new homes, most likely to sell for around $2 million. To avoid having to set aside some of the units as affordable, it intends to pay an in-lieu fee of close to $3 million to the Mayor's Office of Housing and Community Development.

Nearby residents had argued that the entire project should be affordable and voiced criticisms about its impact to the trees on site and views afforded by the hilly property. Backers of the project have noted it will produce badly needed housing with two or three bedrooms suitable for families with children.

Due to several changes developer Marc Babsin agreed to make, there will be fewer bedrooms in some of the homes, but the total number of housing units will remain the same. The homes will be pushed back from the sidewalk in order to preserve 10 Monterey cypress trees, and the number of driveways was cut from 15 to eight.

A public staircase adjacent to a viewing deck will run the length of the hillside. Babsin also agreed to fund various pedestrian improvements in the area, from new crosswalks and sidewalk bulb-outs to funds for ongoing maintenance of plantings in the street median.

If approved, the project will be the first family housing development to be built in that section of the city's eighth supervisorial district in years. No matter what the planning commission decides, its decision could be appealed to the Board of Supervisors, which would then decide its fate.

Because of that Mandelman has not taken a stance of support or opposition on the proposed development. His office has been complimentary of the changes the developer agreed to make to the project.

'Monster home' ordinance
The ordinance Mandelman introduced January 25 is a revised version of the one he had sought last year that would have been citywide. But the planning commission rejected it and advised him to narrow its scope to District 8.

Among its provisions is a requirement that approval from the planning commission would be needed for any development resulting in a residential unit that is more than 3,000 gross square feet (including garage space) or a certain floor area ratio is met. Thus, a 2,000 square foot lot would trigger the need for a hearing if any unit exceeds 2,400 square feet, while for lots of 2,500 square feet or larger the threshold would be 3,000 square feet per unit.

Property owners wanting to build a single unit in excess of 4,000 gross square feet would need to demonstrate a specific hardship in order to be given a variance from the restriction on a unit of such size. The goal of the ordinance is to see multi-unit buildings be constructed rather than single-family homes.

"I see a steady stream of older 1,200 or 1,500 square foot homes in neighborhoods like Noe Valley and Glen Park being converted into 5,000 square foot mega mansions for one household that flip for $6 or $7 million," Mandelman said. "If you're building 5,000 square feet of housing, you should be building housing for two, three, or four households in that building."